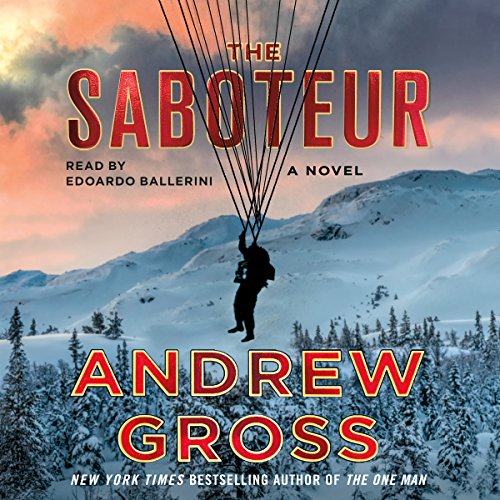 February 1943. Both the Allies and the Nazis are closing in on attempts to construct the decisive weapon of the war.

Kurt Nordstrum, an engineer in Oslo, puts his life aside to take up arms against the Germans as part of the Norwegian resistance. After the loss of his fiancée, his outfit whittled to shreds, he commandeers a coastal steamer and escapes to England to transmit secret evidence of the Nazis' progress toward an atomic bomb at an isolated factory in Norway. There, he joins a team of dedicated Norwegians in training in the Scottish Highlands for a mission to disrupt the Nazis' plans before they advance any further.

Parachuted onto the most unforgiving terrain in Europe, braving the fiercest of mountain storms, Nordstrum and his team attempt the most daring raid of the war, targeting the heavily guarded factory built on a shelf of rock thought to be impregnable, a mission even they know they likely will not survive. Months later Nordstrum is called upon again to do the impossible, opposed by both elite Nazi soldiers and a long-standing enemy who is now a local collaborator - one man against overwhelming odds, with the fate of the war in the balance, but the choice to act means putting the one person he has a chance to love in peril.

Based on the stirring true story, The Saboteur is Andrew Gross's follow-up to the riveting historical thriller The One Man. A richly woven story probing the limits of heroism, sacrifice, and determination, The Saboteur portrays a hero who must weigh duty against his heart in order to single-handedly end the one threat that could alter the course of the war.

"Gross's saboteur is a champion of patriotic devotion and physical endurance, and Ballerini captures his grace and humanity, as well as his courage, in a manly timbre." - AudioFile Magazine

What listeners say about The Saboteur

I am a big fan of World War II stories. This one was unlike any I’ve ever read. I found the story fascinating, liked the characters and the way the author brought them to life. Understanding what was happening in Norway gave me new insights into the war as a whole. This book is a tribute to the brave men who sacrificed their lives to save all of us from the Nazi atomic program.

Slow at times but great ending

Love this narrator, such a dependable strong voice for characters. Had never read much about Norway in the World War II efforts, great historical fiction. Had some significantly slow parts in the beginning and middle, but great ending. Which also means it was a horrible and slightly suspenseful ending, but great nonetheless

I am a big fan of Mr. Gross. His last book was so well done it brought to life an important story from WWII. He tries again with a different event but this time he makes it a straight-up melodrama. First half fells like a remake of The Dirty Dozen. Last section is right out of Titanic. Know this was not going well when the plot points are telegraphed 5o pages early. Mr. Ballerini narration style did not work for this material. He reads each line with heavy melodrama. Kind of like he want us to think every line is profound and important. Had the opposite effect on me.

This is a diverting listen but not in the same league with his last book.

Awesome Rendition of the Telemark Raid

I was not encouraged by the way the book started but stuck with it. I am glad I did. The story was told well by the characters and the author did a great job building suspense throughout the book. I enjoyed it very much and the narration was really good. If you like WW2 based on true events, you will like this book.

Great listen the narrator performs beautifully. What’s starts off slow gains momentum and leads to an awesome adventure. Story is at times predictable but never the less entertaining. Enjoy this historical fiction (emphasis on fiction) !!

It was rather disappointing

This was a good war story but didn’t pay off a couple things. The messengers were built up but never showed real benefits. We met one character who helped a little towards the end of the story but wasn’t needed. The female messenger was a red herring of a love interest.
The ending was good except the potential happy ending is a little unrealistic.
As historical fiction, this book is good. As a thriller, it is a bit lacking because the book description describes half the book.
Read with little expectations

The poor Norwegian accent got murdered

The story was very good. Character development was fine. I’ve listened to other books narrated by Edoardo Ballerini and think he’s a great narrator. He is able to change his voice and accent to match the character.... except the Norwegian accent. I am Norwegian so am perhaps more critical, but holy cow... I had to laugh sometimes. Good try Mr. Ballerini, this was a tough one.

I enjoyed the book about the Holocaust but this one was really slow and the story was pretty boring. I forced myself to get through 1/2 the book and just lost interest. I would not recommend this book to anyone. The narrator did a fair job, but it didnt help the overall story. Wont be getting another book by this author.

Excellent book keeps you on the edge of your seat