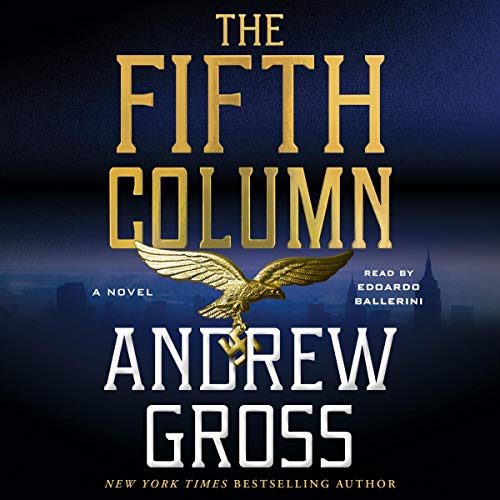 "Gross is a skilled storyteller with a keen ability to create tension and put the reader in time and place. The book is more than ably narrated by Edoardo Ballerini, complete (when appropriate) with convincing German and French accents." (Jersey's Best)

Number one New York Times best-selling author of The One Man Andrew Gross once again delivers a tense, stirring thriller of a family torn apart set against the backdrop of a nation plunged into war.

February 1939. Europe teeters on the brink of war. In New York City, 22,000 cheering Nazi supporters pack Madison Square Garden for a raucous, hate-filled rally. In a Hell’s Kitchen bar, Charles Mossman is reeling from the loss of his job and the demise of his marriage when a group draped in Nazi flags barges in. Drunk, Charlie takes a swing at one with tragic results and a torrent of unintended consequences follows.

Two years later. America is wrestling with whether to enter the growing war. Charles' estranged wife and their six-year-old daughter, Emma, now live in a quiet brownstone in the German-speaking New York City neighborhood of Yorkville, where support for Hitler is common. Charles, just out of prison, struggles to put his life back together, while across the hall from his family, a kindly Swiss couple, Trudi and Willi Bauer, have taken a liking to Emma. But Charles begins to suspect that they might not be who they say they are.

As the threat of war grows, and fears of a "fifth column" - German spies embedded into everyday life - are everywhere, Charles puts together that the seemingly amiable Bauers may be part of a sinister conspiracy. When Pearl Harbor is attacked and America can no longer sit on the sideline, that conspiracy turns into a deadly threat with Charles, the only one who can see it, and Emma, an innocent pawn.

"Gross has written a masterpiece that is both heart-wrenching and heart-pounding, and certain to become an instant blockbuster." (Pam Jenoff, New York Times best-selling author of The Lost Girls of Paris)

What listeners say about The Fifth Column

Andrew Gross is the Master of Historical Thrillers

This latest book by Andrew Gross captures my attention right from the beginning. It begins with Charles Mossman (the protagonist) sitting in a bar on his 30th birthday feeling sorry for himself. When Nazi sympathizers enter the bar running their mouths about the Jews, Charlie takes on the group of them. Outside, in a fight for his life he slugs an innocent passerby. Charlie goes to prison for 2 years for man slaughter.
When Charlie is released he finds his wife wants a divorce but is willing to grant him visitation with his young daughter. It’s there that he meets her nice Austrian grandparent like neighbors across the hall. Charlie’s daughter loves them. Charlie doesn’t. There’s something about this couple that sets off warning bells in his head. No one will listen to him and in the interest of his family Charlie is determined to find out if these people are who they claim to be. What he finds could cost him more than he bargained for.
Edoardo Ballerini does an outstanding job narrating.
This book has my HIGHEST RECOMMENDATION.
If you found this review helpful please indicate so.
Thank You.

Several surprises....held our attention all the way through. Loved the experience! Well worth the listen!

very predictable, unrealistic. hard to believe . Main character was willing to allow thousands to be killed to save his daughter ?

Completed bored by the story. Half way through I stopped listening. Don’t waste your time on this audible.