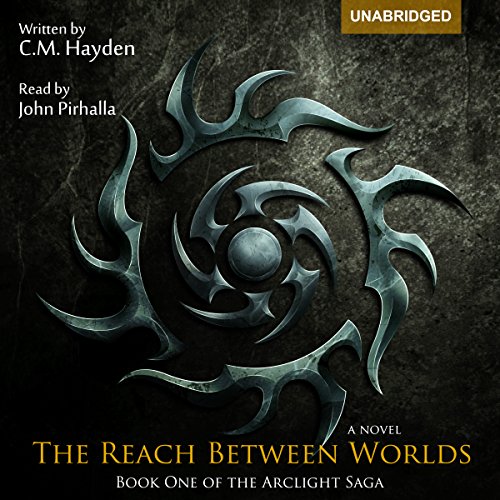 The Reach Between Worlds

In a gritty world of lies and treachery, the standard fantasy hero just won't do.

Taro lost his right leg years ago, but with a family to support, he doesn't let it slow him down. For years he's worked for a notorious crime lord named Victor Mathan. Mathan deals in stolen magical artifacts and trusts Taro to finish his work with as few questions as possible.

When an absurdly well-paying job comes up, Taro is quick to volunteer. Mathan wants him to break a powerful sorceress out of jail, but her prison is under the control of an ancient military order called the Magisterium. To get to her, Taro must pose as a Magisterium recruit. The courses are grueling, the trials drive students mad, and the magic they teach can be as deadly to the caster as it is to the target.

What listeners say about The Reach Between Worlds

this book has everything you can hope for from a classic fantasy book. a well paced gripping story, A variation of characters, cool magic system with slight steampunk elements to it.
even though I never heard about the narrator he did a splendid job
highly recommended for any fantasy lover.

What made the experience of listening to The Reach Between Worlds the most enjoyable?

The narration was fantastic. With so many characters and voices and accents in the book Pirhalla performed it incredibly well. Real joy to listen to this book. Most importantly Reach was a very good first book by Hayden. Not your normal book of magic. It's full of twists and turns and surprises that are weaved into the story quite well. Hayden gets a crucial element that many writers don't get...make your reader root for and care for your characters. He has accomplished this. Even smaller characters are fleshed out well and it really adds to the entire world created in Reach. This is one you'll want to listen to as opposed to reading. Can't wait to hear book 2.

While thinking of a good book to use for my first in-depth review, I went through quite the list. From A Song of Ice and Fire to Wheel of Time to Ender's Game. Then it hit me, why not do a book from one of my current favorite series? So, without further ado, here is The Arclight Saga: Book 1, The Reach Between Worlds. Keep in mind, there may be spoilers.

I got introduced to this series through Facebook. I saw a sponsored post for it, noticed it was free on Kindle, and went, "What the hell? If I don't like it, I can always delete it." Little did I know that I would absolutely love it. Since I read book 1, I've been in contact with the author several times, C. M. Hayden is a great guy to talk to, read all four books that are currently out, and even beta read book 3.

The basic plot is that Taro, the main character, takes questionably legal jobs to earn money for his family, as both parents are sick. Taking a job from Mr. Mathan, a well known shady gentlemen in his town, he ends up going to the Magisterium, and enters school to become a Magister. Freeing a young girl named Vexis from prison, he starts a chain of events that almost destroys the world.

The characters are one of the best parts of the book. They can be frustrating, but so can people in real life. They are highly flawed, but hey, so am I.

Taro is a 16 year old boy, who is missing a leg, and would do anything for his family. And by anything, I mean anything. From helping a shady criminal to freeing someone who uses the power of a Dark God. He is one of my favorite two characters in the series, and also the one I most want to strangle. He is a typical teenager, trying to do good but making all the wrong decisions.

The magic system is just phenomenal. Magic systems in games or books are one of the main draws for me. I just love seeing how they are done. This book goes the pseudo-scientific way. The magisters, this books equivalent of mages, use specialized pens (inscibers) and ink to create runes, then use their templar to feed power to the runes. The templar is the main magical force in the magisters, whereas the runes actually focus magic to do what they want it to do. Magisters can use templar in other ways, such as enhancing physical strength.

During the books, we are introduced to several artifacts of the old gods. The first book features heavily on the Arclight, with the other four being introduced in subsequent books. They (along with someone who has their templar unlocked) can unlock the templar within a person, each artifact having its own unique magic. The other artifacts are the Netherlight, Deeplight, Overlight, and the Corelight. I have spoken to C. M. Hayden about them, and I have my own theories on what will happen with them.

The world (Arkos) is massive. I won't say much about it, as it is a spoiler, but it definitely is not a normal planet. To get around, a Arkosian would either have to walk or take a ship, with either Magisters or royalty able to take airships. So far, much of the world hasn't been revealed, unless you take a peek at the glossary, which does give more information on the unique nature of Arkos.

Overall, I highly recommend The Reach Between Worlds. It is a well written book by a great author. If you don't have time to read, he also has books 0, 1, and 2 out on Audible. It is the epitome of a 5 star book.

Typically, I only listen to.audiobooks during my commute to work; however, I find myself getting in trouble with my wife for listening too this one during dinner. And before bed. And any other random event. Can't wait to read the rest!

I am proud to say that I know the author of this book and it was amazingly written book. I honestly can't believe that this book was written like someone I know. it was grilling and it kept you on your toes there was Secret and lies and excitement it was a good car ride audiobook with a that was very into the characters. I'm glad that he reader of the story did not drone on and on. I cannot wait for my next car ride to listen to the next book

Overall, this was a promising story

The Reach Between Worlds by C.M Hayden is the first book in the series called The Archlight Saga. Taro’s parents are really sick and so he must resort to unsavory dealings with a crime lord to try to make some money to afford their medicine and to support the family.  As a part of this, Taro and his sister are suddenly thrust into a complex plot that starts with Taro and his sister entering the Magistarium to learn magic, and also break out a prisoner. The crime lord and the prisoner stand starkly against the Magisterium and what it stands for, leaving Taro in the middle.  However, as Taro starts to truly become a part of the Magistarium and make friends, he begins to waver on his loyalties. As the stakes get higher, Taro must decide which side of the fight he wants to be on.

Overall, this was a promising story. A young boy who’s caught between good and evil and in the meantime enters a school to learn magic. And the teachers pitted against this prisoner who escapes and everything hinges on Taros’ actions. Unfortunately, I didn’t feel compelled by any of the characters and many of them felt similar enough that I had a hard time remembering who was who. I was also a little confused about how everything worked, from the magic to the arc light itself, that powers the city. I think that if I had found Taro compelling I would have been able to overlook lack of complete understanding of how everything functioned, but he just seemed to take action after action without much personality. This all compounded.  However, since the plot was good, the end was interesting and set up the next novel nicely.

The narration by John Pirhalla was well done, with clearly distinguishable voices for each of the characters. The production quality was good as well. I would recommend this novel to anyone who likes a young adult story about learning magic, learning how to survive in the middle of a complex mess of powerful people, and making hard decisions.

The beginning of something great

C.M. Hayden quickly builds a rich world that often gives you more questions than answers but in a book with well developed characters and fast paced adventure this is exactly what I liked about it. The promise of mysteries to be explored and history to be unearthed in future books makes this an absolute joy to read, I will be following this author for a long time I think.

What did you love best about The Reach Between Worlds?

Very original story and setting, not your typical fantasy world.

What was one of the most memorable moments of The Reach Between Worlds?

Vexis, the main villain. She's a lot of fun. Kind of a mad genius type Joker.

Which character – as performed by John Pirhalla – was your favorite?

I hope you enjoy reading it as much as I enjoyed writing it! Reviews help, I'd love to continue this series in audiobook format if there is interest! :)

Good start but quite flawed

I've certainly read/listened to worse offerings, and there are world building elements with strength here, but a Mary Sue that would make Kvothe blush, eye rolling dialogue, and then author's lack of reverence for his most important scenes make me unlikely to continue the series.

Not terrible but not I wouldn't recommend

The story is very simple and not in a good way. The characters actions and motives don't cone across as very believeable. I would not have finished this if it wasn't so short. I won't be picking up the next one.