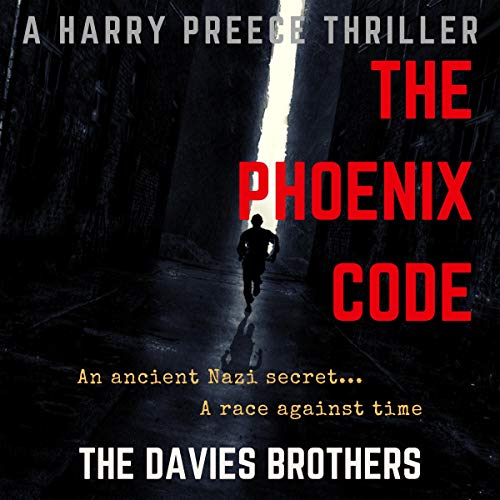 By: The Davies Brothers
Narrated by: Stephen Doyle
Try for $0.00

The legend is true...Before his suicide, Adolf Hitler left one final message for his followers - a secret code hidden in each of his most treasured artworks. It reveals an evil so horrifying, its discovery will force humanity to succumb to the Nazis once again - 75 years after the Führer’s death.

Art historians Harry Preece and Elena Sivori are dragged into a terrifying chase - from Buenos Aires to London, Madrid to Venice - desperate to stay one step ahead of a ruthless arms dealer, a daring thief, and a billionaire with a deadly secret.

Can Harry and Elena track down the lost paintings and discover the shocking truth about Hitler’s legacy? The only way they can save the world...is by cracking the Phoenix Code.

An action-packed adventure that will appeal to fans of Dan Brown, Lee Child, Robert Ludlum and Sam Bourne, The Phoenix Code draws on startling historical fact and chilling Nazi legend to create a breathless mystery-thriller set in real locations across Britain, Japan, Argentina, Spain, Germany, and Italy. North Korean agents, corrupt politicians, Russian oligarchs...they are all vying to crack the code and get their hands on ultimate power - unless Harry and Elena, an unlikely pair of world-weary academics, can thwart them.

Will they solve Hitler’s puzzle and save millions from gruesome death? Or will evil prevail and the Nazis rise again? Find out in...The Phoenix Code.

What listeners say about The Phoenix Code

The narration is good and the story is good. However, the editing of the audio is subpar. Phrases repeat and some sections sound like they were recorded in a metal can.

Tedious in the extreme. Nothing happened and often

A great idea that did not fulfil its promise. Totally incredible. I was suspicious when noting that the book was written by two people (brothers). They would have been better advised to write two books instead of one joint and poor effort.