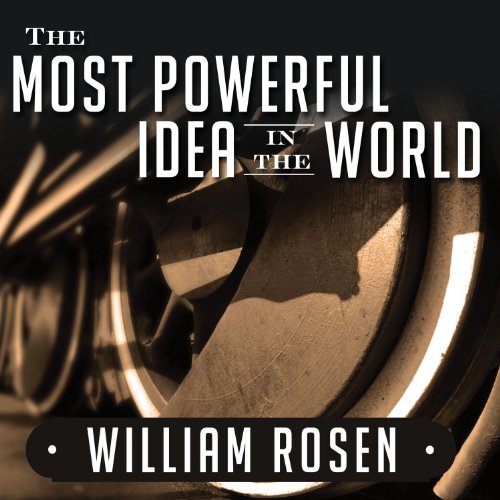 The Most Powerful Idea in the World

By: William Rosen
Narrated by: Michael Prichard
Try for $0.00

If all measures of human advancement in the last hundred centuries were plotted on a graph, they would show an almost perfectly flat line - until the eighteenth century, when the Industrial Revolution would cause the line to shoot straight up, beginning an almost uninterrupted march of progress.

In The Most Powerful Idea in the World, William Rosen tells the story of the men responsible for the Industrial Revolution and the machine that drove it - the steam engine. In the process, he tackles the question that has obsessed historians ever since: What made 18th-century Britain such fertile soil for inventors? Rosen's answer focuses on a simple notion that had become enshrined in British law the century before: that people had the right to own and profit from their ideas.

The result was a period of frantic innovation revolving particularly around the promise of steam power. Rosen traces the steam engine's history from its early days as a clumsy but sturdy machine, to its coming-of-age driving the wheels of mills and factories, to its maturity as a transporter for people and freight by rail and by sea. Along the way, we enter the minds of such inventors as Thomas Newcomen and James Watt; scientists, including Robert Boyle and Joseph Black; and philosophers John Locke and Adam Smith - all of whose insights, tenacity, and ideas transformed first a nation and then the world.

Rosen is a masterly storyteller with a keen eye for the "aha!" moments of invention and a gift for clear and entertaining explanations of science. The Most Powerful Idea in the World will appeal to anyone who is fascinated with history, science, and the hows and whys of innovation itself.

What listeners say about The Most Powerful Idea in the World

A Revelation about a Revolution

In William Rosen's masterful new book, The Most Powerful Idea in the World: A Story of Steam, Industry, and Invention, the most powerful idea is not the invention of the steam engine. Rather, the title refers to the development of the concept that ideas can be property, and that through the availability of patent law and capital, individuals tinkerers can become industrial scale innovators.

Rosen notes that: "From 1700 to 2000, the world's population has increased twelvefold - but its production of goods and services a hundredfold". (page 316) Will the innovations around digital technology, from cheap and powerful mobile computing devices to robust cloud based applications, bring about a commensurate rise in productivity as the industrial revolution? The steam engine allowed the cost of energy to come down rapidly, through its original use as the power source to pump out coal mines to its subsequent use in locomotives to bring down the costs of transporting coal. Today, it is less clear if digital technologies can bring about similar improvements in the productivity of education (increased access and quality at reduced costs), that the steam engine did for energy productivity in the 18th and 19th centuries.

It is ironic that the very intellectual property protections that catalyzed the willingness of inventors and entrepreneurs to invest their energy and money into the steam engine that are perhaps retarding innovations in education. Much of our current economic prosperity is built on the concept that ideas are property, yet many of the barriers to extending learning at low cost run up against this principle. Efforts to extend the infrastructure and content of learning outside of the marketplace, through open source and open educational content, have failed to significantly bring costs down or increase access.
Are we in the midst of an educational revolution powered by technology? Or are we grafting new technologies on old structures, changing education only at the margins?

A well written and read rendition of mechanical engineering history. Entertaining to those into just that. Exhaustive and accurate investigative work with many interesting sidebars. I liked the links between mechanical ideas that were apparently forming simultaneously within Europe and Asia early on as well as the demographic effects the mechanical ages have had on North America and Europe. Wish it had ventured into greater detail the history in the latter half of the 19th century than it did. Overall well covered but will seem dry listening to anyone not appreciating engineering and steam power development.

If you could sum up The Most Powerful Idea in the World in three words, what would they be?

Have you listened to any of Michael Prichard’s other performances before? How does this one compare?

This was the first one I've heard. Other reviewers said they hated his reading, that it was too slow. And yet others said you get used to it in no time. I completely agree. After the first five minutes or so, this book is gripping enough on its own for the relatively slow reading pace to feel fine. And I liked the timbre of Michael Prichard's voice, once it got into me.

I could have, but I bought it with the intention of spacing it out. It might be just too long and too information-packed to do that. But I never got bored of it.

Occasional jokes in the narrative or footnotes (which the narrator reads) gave me a positive feeling about the author of this generally quite scholarly book. It was definitely worked into a book that anyone with a little bit of attention span could enjoy, though most people who don't like to read printed books in general wouldn't be able to sit through this. You have to be a little curious about the Industrial Revolution, but just a pinch of curiosity will get you in the door, and William Rosen will take you the rest of the way.

I'd reccomend this book to lovers of history or the mechanically or technically inclined. If you're a combination of the two, this book will be very much right up your alley. It affords an entertaining way to expand upon both historical and technical knowledge.

What was one of the most memorable moments of The Most Powerful Idea in the World?

A summing up of the book's premise via a historical Abraham Lincoln speech at the end of the epilogue.

There wasn't really one in particular, though describing Coke's marriage as the worst decision of his life does jump to mind.

Not particularly, this one lent itself to episodic listening quite well, as it is mostly pretty interesting, but isn't really plot driven in any significant sense.

The occasional authors notes tended to be a nice little bonus.

Full of great detail and color on the many people and things that led to the steam driven locomotive. Great narration too!

Another reviewer spoke negatively of Michael Prichard's narration, complaining about the unusually slow pacing. I nearly passed on this audiobook as a result, but since I found the subject material compelling I took a chance. I'm glad I did. Mr. Rosen's text is fascinating, wide-ranging, often funny, and never boring. This is not a dry tome rehashing the old commonplaces about the Industrial Revolution, but a broad panorama that takes in the science, sociology, economics, law, and culture that allowed mankind to leap from eons of miserable subsistence to a sustainable real prosperity at a particular moment in history. The best thing I can say about Mr. Pritchard's narration is that, after an initial adjustment, I became unaware of it. Poor narrators have killed books for me in the past, but this did not happen here. Granted, Mr. Pritchard's pauses for punctuation are inordinately long, but I really didn't mind. I never found myself waiting impatiently for a sentence to end - maybe because the concepts introduced occupy the mind (or at least my mind) too thoroughly. The narration is a bit unusual, but the text is outstanding. On balance I have no difficulty recommending this audiobook.

Fascinating look at the rise of invention

Would you consider the audio edition of The Most Powerful Idea in the World to be better than the print version?

Reading non-fiction puts me to sleep. Listening to it fires my imagination. The Most Powerful Idea in the World did this especially well. I enjoyed it so much that when it ended I wanted to start it over from the beginning again.

What does Michael Prichard bring to the story that you wouldn???t experience if you just read the book?

One of the better narrators I've listened to lately, Mr Prichard gave a varied enough performance to keep me listening eagerly.

I loved it when the author compared Aristotle's theory on why vacuums were impossible to the Monty Pynthon skit about witches!

As an author doing research on the times from the Enlightenment to the Industrial Revolution, this book was the best overview.

Will be getting the book

My low rating has only to do with the reader, Michael Prichard. The info he presents is fine, but his delivery is brutally slow, monotone and not unlike a bad history professor. I love history, especially technical history and the impact it has on the world, but even with my iPod pushing the text along at "faster" mode, I couldn't handle it. I hate giving up on books because it makes me feel like a failure, but I just couldn't handle the reading.

From an info standpoint, the book is a four-star piece. But the reading is brutal. I thought after listening to the preview I could get through it. But he broke me early on. I just wanted to let people know before they purchased the book here.

This takes you through a world of the industrial revolution from the lens of innovations, inventions and patents. However it is heavily anglocentric, which in retrospect is kind of the point of the book. Not withstanding it is a must read for any avid non fiction reader, who likes a historical spin on complex topics. Goodluck, no pressure (pun intended after you read the book).