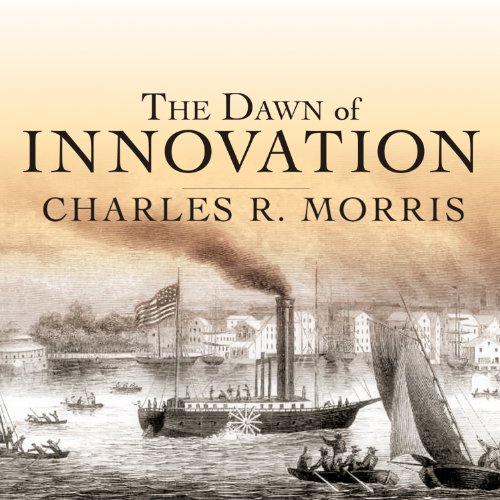 The Dawn of Innovation

By: Charles R. Morris
Narrated by: David Colacci
Try for $0.00

In the 30 years after the Civil War, the United States blew by Great Britain to become the greatest economic power in world history. That is a well-known period in history, when titans like Andrew Carnegie, John D. Rockefeller, and J. P. Morgan walked the earth.

But as Charles R. Morris shows us, the platform for that spectacular growth spurt was built in the first half of the century. By the 1820s, America was already the world's most productive manufacturer and the most intensely commercialized society in history. The War of 1812 jump-started the great New England cotton mills, the iron centers in Connecticut and Pennsylvania, and the forges around the Great Lakes. In the decade after the War, the Midwest was opened by entrepreneurs.

In this book, Morris paints a vivid panorama of a new nation buzzing with the work of creation. He also points out the parallels and differences in the 19th century American/British standoff and that between China and America today.

"The author is at his best when he focuses on the people behind the technology. . . . Morris' research is thorough. . . . Ambitious." (Kirkus)

What listeners say about The Dawn of Innovation

I was basically looking for something to fill in my gaps in knowledge of 19th Century history, and was expecting this to be informative but dry. Instead, I was surprised how much I loved this book! We get histories of the major players in the American industrial revolution, what they innovated and what effect their mass production had on society. I learned about company towns that sprang up in Massachusetts, New York and Ohio. The author quotes (often British) observers of this societal leap forward as varied as Frances Trollpe, Isabella Lucy Bird, and Dickens himself. The history begins with Marc Brunel's pulley block factory in Portsmouth, England which started the British industrial revolution, then continues on with his son, Isambard Kingdom Brunel, considered one of the greatest Britons of all time. Then we move to America where the idea of mass production gets applied to nearly every possible commercial product possible. The author always notes how each industry changes American lives, whether the change occurs in war, transportation, clothing or diet. This book perfectly synthesizes in-depth information while taking the widest view possible. The eventual supremacy of the U.S. over Britain is always alluded to, but it is finally dealt with by examining the condescending attitudes toward American ingenuity that prevailed in Britain throughout the 19th Century. However, although Americans were incredibly adaptable, they also had the advantage of starting out in the comfortable position of Number Two, enabling them to develop others' long-gestating ideas, if not outright stealing them. The author then jumps ahead to the 1950s and 60s when Japan managed the same trick with the U.S., and today when China has begun to steal intellectual property from its close partners Germany and the U.S. You won't find many history books with a point of view that so clearly draws parallels between two centuries ago and today. This book was as thrilling as the time it evoked.

How our industries started

This is an interesting book with lots of detailed information that was presented in an interesting way. The book covers the time frame from 1780 to 2012. Morris provides how and why and industry develops including where , who invented it and what happened to it over time. I found the information that the U.S. developed precision mass-manufacturing of guns so that parts were interchangeable in guns of that model interesting, it had not been done until then and thought to be impossible to accomplish. I also found the end of the book fascinating as Morris's demonstrated the parallels and differences between U.S. and Britain of the 19th century and between U.S. and China of today. This is a book that is hard to put down. David Colacci did a great job narrating the book.

A good perspective, but a little bit too much detail.

Would you be willing to try another book from Charles R. Morris? Why or why not?

Sure, I liked the way he looked at the economic impact of historical industrial events.

Just a little bit mechanical, but still a good reader.

The end of the book, where he connects to the current China gaining technological, industrial and economic superiority to the U.S., along with the comparisons to the U.S. doing the same to Britian (the theme of the majority of the book), was worth the entire book.

Decent, but not as tight as some of Morris; work

The real problem is the narrator--hes very hard to listen to, drones, nasally, etc--although obviously narrator voice, diction and style is where personal preference and taste count most.

History On a Micro Scale

This was a very interesting book, but it is not what I expected. I was looking for something that looked at the industrial revolution with more of a birds-eye view like what conditions were the cause of certain innovations, how they changed the course of human history, and how they influence, or evolved into what we know today. Instead, this book went into a great amount of detail on various inventions of the industrial revolution such as firearms and clocks. I would still recommend this book to anyone interested in that kind of thing, but I did not get out of it what I was hoping for.

A great history with descriptions of inventions

I've listened to other titles on the Industrial Revolution, and this has given the best descriptions of the inventions.