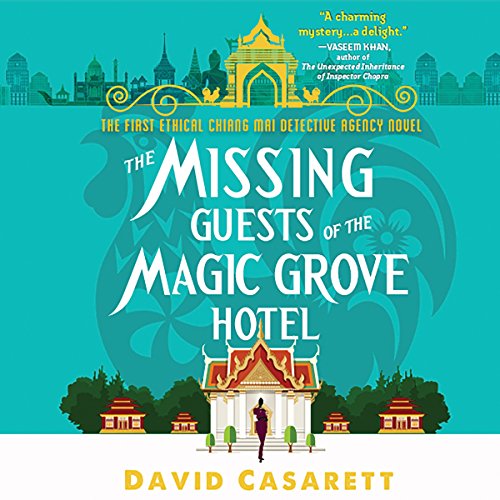 The Missing Guests of the Magic Grove Hotel

By: David Casarett
Narrated by: Jolene Kim
Try for $0.00

A fascinating mystery featuring Ladarat Patalung, the first and only nurse detective in Thailand.

As a nurse ethicist, Ladarat Patalung works to save the lives of her patients and to make sure the ones she can't save have at least the dignity of a "good death".

But when wealthy foreign travelers start to go missing all across Thailand, Detective Wiriya Mookjai fears that a killer is at large and turns to Ladarat for help.

The travelers have nothing in common except for brief stays at a mysterious resort known as the Magic Grove Hotel....

Another Fun Mystery in Thailand

Ladarat Patalung, nurse ethicist, gets involved in another case with her detective boyfriend, Wiriya Mookjai, in tracking down missing visitors to Thailand in The Missing Guests of the Magic Grove Hotel by David Casarett. Ladarat doesn't really have time to help Wiriya because she has a lot of extra work, plus a conference presentation to prepare, but she can't turn him down when the families of eight American or European tourists so far have reported that they haven't heard anything from their family members. Ladarat sends her very large American bouncer friend, Jonah, who is looking for a new line of work to the isolated Magic Grove Hotel, where each of these missing people have stayed at one point or another, as their new receptionist.

In the meantime, Sisithorn, the assistant nurse ethicist, has uncovered a potential smuggling ring. Tourists seem to be getting jade from people carrying canvas bags with parrots on them, and they are smuggling the valuable jade out of the country. But before the pair can deal with the situation, Sisithorn's boyfriend, a doctor at Sri Bat Hospital, disappears and is found the next day asleep on a bench. He is disoriented, saying he took a bus the 12 hours from Bangkok, where he had a job interview, but he has no recollections of the bus journey or getting off the bus, but his money has been stolen. The doctor he reports to thinks he may have been drugged in order for someone to steal his money. And before long Ladarat finds evidence that this doctor is not the only victim of such a crime. So she gets Wiriya to put a pair of officers on the case.

As Ladarat works on these cases, she still has her own work as nurse ethicist to do. She has decided to go through the charts of those who have died to get a sense of whether people dying in the hospital have been dying good deaths. But there have been only three deaths from the palliative care unit, which should be having more. What is going on?

I enjoyed listening to The Missing Guests of the Magic Grove Hotel, but not as much as I loved Murder at the House of Rooster Happiness. It gives a special taste of Thailand to us Americans, and the sense of the medical system in that Asian country and the world of tourism was fascinating. I do have to confess that all the discussion of Thai food made me hungry, in particular for my favorite Thai restaurant. I loved getting to visit Thailand vicariously with Ladarat and Wiriya, including the analysis of the medical case featured in the previous book, as Ladarat and Sisithorn prepare a conference presentation on the case. The pace of the book reflects the generally event- oriented instead of time- oriented pace of those from Asia.

The plot of The Missing Guests at the Magic Grove Hotel follows four different mysteries, which I think was too many for this book, as it was unable to devote much time to any given mystery. It jumps around a bit awkwardly and cannot spend the time focusing on each case that I would have liked to have seen. However, the message of the book about the importance of palliative care for those dying comes through in the midst of this. Casarett himself is a palliative care doctor at the University of Pennsylvania, and he dedicates the book to the palliative care workers who do so much to ease the dying.

The biography of Casarett on Amazon is very impressive, especially given the quality of the murder mysteries he writes:

"DAVID CASARETT, M.D., the author of Shocked, is a physician, researcher, and tenured professor at the University of Pennsylvania's Perelman School of Medicine. His studies have resulted in more than one hundred articles and book chapters, published in leading medical journals such as JAMA and The New England Journal of Medicine. His many awards include the prestigious U.S. Presidential Early Career Award for Scientists and Engineers. He lives in Philadelphia."

All this makes me all the more impressed by the book, both with the quality of his creative writing and with the way he writes from a position of knowledge of his field of palliative medicine.

The characters in The Missing Guests at the Magic Grove Hotel are drawn so vividly that I picture Ladarat at work in the hospital, especially as she makes the rounds with the little, 10-pound therapy dog who works at the hospital and makes friends with the patients because he knows how important he is. I see Wiriya interact with Ladarat over the Thai food that Ladarat is leaning to cook and working cases. I also picture Sisithorn and her enthusiasm for all aspects of her work, too young to have become jaded or to have developed a protective shell against the pain of working with dying patients. I found myself very impressed with the way each of the characters was drawn in such a lively manner.

The audio version of this book is performed by Jolene Kim. She does a good job, but I rather wish that the publisher had gotten Kristin Kalbli, who narrated Murder in the House of Rooster Happiness, to return to narrate this book. Kalbli pronounces the Thai words with a Thai accent, giving much more realism to the book, but Kim uses an American accent. She serves as a good narrator, with good expression, voices, and timing. If not for my having already enjoyed Kalbli's use of Thai tones and accent, I would be very happy with this performance.

Despite the weaker plot points than in the previous book, I still thoroughly appreciated The Missing Guests at the Magic Grove Hotel. I enjoyed the Thai flavor of the book and the many delightful characters. I really hope that Casarett continues the series that I am loving so much. I give this book four stars.

Great interweaving of cases and conclusions!

I could not stand the valley girl narrator of the first book and returned it. Jolene Kim is a pleasant narrator for a Thai book. The story and characters are delightful.