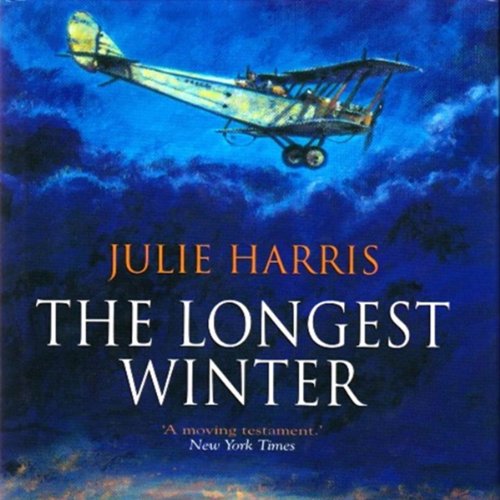 By: Julie Harris
Narrated by: Carl Moore
Try for $0.00

In 1911, a young John Shaw from South Carolina had his first taste of flying. In 1926, two years after the plane crash death of his best friend, he attempted a solo flight record in a refitted 1923 Curtiss Jenny. Then, with half the journey completed, his plane was caught in a storm, went down, and for 17 years he was listed as missing, presumed dead.

The Longest Winter is a work of fiction, the tale of one man's life. His story is one of despair and courage, tragedy and triumph - stranded on an uncharted rocky island, his body broken by the crash, John is adopted into a tribe of Aleuts, until the evacuation of the Aleutian Islands in May 1943.

This is John's story.

What listeners say about The Longest Winter

The Longest Winter is an emotional story that is written as if it is a non-fictional tale of one man’s life in the early 20th Century. Primarily set in the Alaskan Territory, John attempts a solo flight around the world and crashes on one of the uncharted Aleutian Islands during a ferocious storm in 1926. He is saved by an Aleutian woman who mends most of his broken bones and he is adopted into the tribe of Aleuts.

John spends much of his time writing in his journal and reminiscing about his childhood and his sister Meg. These flashbacks are wonderfully woven into the story with great affect. You get to know and understand John better, including his feelings of despair, exhaustion and depression during his 17-years on the island, as well as the joy he experiences when his children are born.

We also see a transformation in John after the United States Navy rescues the people of the Aleutian Islands during WW II. John witnesses the abusive treatment of his daughter and other island girls by the servicemen. It’s easy to see why John starts to question whether his old way of life pre-crash was civilized after all.

Carl Moore’s narration was very good. His consistency in tone and temperament were calming, setting the right tone for this novel.

Great Story About One Man's Journey of a Lifetime

Would you consider the audio edition of The Longest Winter to be better than the print version?

What I liked best about this story was how it was told in first person. The protagonist John, after crashing his plane in Alaska was rescued and saved by Eskimos. He began a new life, met Kioki and spent much of his time writing in his journal and reminiscing about his childhood and his sister Meg and best friend Bobby.

My favorite scene in The Longest Winter was when John returned home and was shocked to find his sister still alive and doing well and her surprise to find out he had been alive after being thought missing and presumed dead for 17 years.

The Longest Winter wasn't a book I wanted to listen to all in one sitting as it was right at about twelve hours long. While the story progressed forward, it also moved backwards.

I really like Julie Harris' writing style. I think she's a wonderful author. I will look for more books written by her. I received this audiobook free of charge in exchange for an unbiased review.