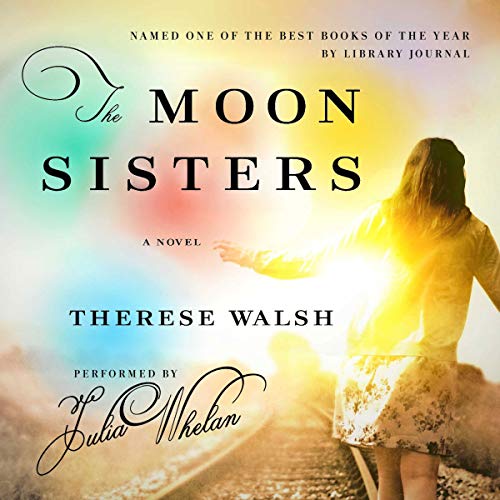 By: Therese Walsh
Narrated by: Julia Whelan
Try for $0.00

After their mother’s probable suicide, Jazz and Olivia Moon struggle to move on with their lives. Olivia, an 18-year-old who can taste words and see sounds, blinds herself by staring at the sun, then decides to walk to the remote setting of her mother’s unfinished novel to resuscitate her hopes and dreams. Jazz, 22, plagued by unresolved conflict with her mother and a hidden trove of her unsent letters, takes a job in a funeral home before being forced back into the role of her sister’s keeper.

The sisters’ journey through the wilds of West Virginia, disaster-prone from the start, takes a turn when they meet two train-hoppers with dangerous secrets, and Jazz learns that Olivia holds a dark secret of her own in the form of their mother’s final unread letter. Mistrust, resentments, and new attachments threaten to tear the two apart, until a final bizarre misadventure forces them to decide what’s really important.

This mesmerizing coming-of-age novel, with its sheen of near-magical realism, is a moving tale of family and the power of stories.

What listeners say about The Moon Sisters

I really enjoyed this book. It’s a story about 2 damaged sisters dealing with the death of their mother. Both of them jealous of each other and both with dark secrets. They end up on a dangerous adventure where they meet some similarly damaged people along the way. Cool twist at the end. Great book.

I started listening to the book on a whim, and the story completely sucked me in. I loved both the sisters, their dynamic, the differences between them and how real it felt the family pressures on each. They are damaged and fabulous and complex and they grow throughout the story. I also loved the writers style. I’ve never been to West Virginia, but I could see and smell it. And, I really enjoyed how Olivia sees the world. Highly recommend.

I cannot express how deeply I love this story. The characters a bit off in a way that makes them more realistic. Trying their best to find a way to come to terms with devastating loss. To find connection in spite of themselves.

This story was delicately layered, with well developed characters whose memories and interactions reflected the intricacies of familial relationships- sometimes painful, sometimes supportive. The reader’s voice was SO easy to listen to- she really conveyed quite a bit of emotion in her smooth, soft voice. Best book I’ve “read” in quite some time.

One of the best stories I’ve heard!

I really enjoyed the way this story flowed. I believed I was on the journey with them. Great story!!

This was a lovely, touching story and the narrator was amazing as she always is.!

Took me a little big time get into the book but once it hooked me I listened for hours!!!!

I had to figure out where to go to write my first review after listening to many books. This book was wonderfu! I wish this Author had more to listen too.

I wasn’t sure that I liked the story at first, but kept listening and got hooked! Love all the twists and turns of the story!

This story got better and better as the chapters flew by. Starts out dark but ends with light.