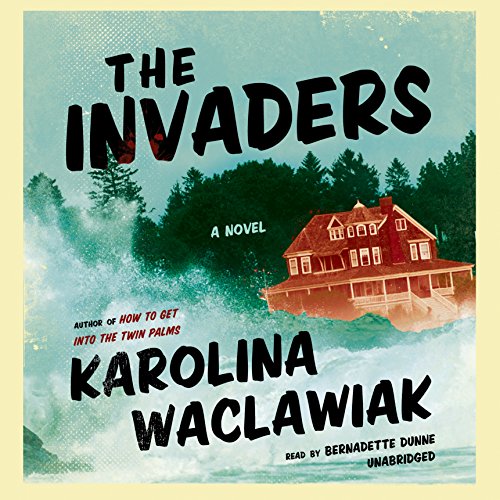 Over the course of a summer in a wealthy Connecticut community, a forty-something woman and her college-age stepson's lives fall apart in a series of violent shocks.

Cheryl has never been the right kind of country-club wife. She's always felt like an outsider, and now, in her midforties - facing the harsh realities of aging while her marriage disintegrates and her troubled stepson, Teddy, is kicked out of college - she feels cast adrift by the sparkling seaside community of Little Neck Cove, Connecticut. So when Teddy shows up at home just as a storm brewing off the coast threatens to destroy the precarious safe haven of the cove, she joins him in an epic downward spiral.

The Invaders, a searing follow-up to Karolina Waclawiak's critically acclaimed debut novel, How to Get into the Twin Palms, casts a harsh light on the glossy sheen of even the most "perfect" lives in America's exclusive beach communities. With sharp wit and dark humor, The Invaders exposes the lies and insecurities that run like fault lines through our culture, threatening to pitch bored housewives, pill-popping children, and suspicious neighbors headlong into the suburban abyss.

I was enjoying the book, but then it ended... Abruptly. It was very strange. There were too many loose ends. This was not one of my favorite books!

This book is a waste of time. Do not spend a credit on this story. There is not one character that you will like and care what happens.

Wish the narrator had use different voices , at times it was hard to tell who was speaking. The novel is graphic, depraved and gross where it doesn't need to be and depressing by nature.

I kept waiting for a plot to start and I'm not sure it ever did. A bratty rich community with obnoxious characters that lie, cheat, beat on each other emotionally and physically just isn't my taste.

A good story, but disappointing...

I would have liked more character development- somehow I could not understand the motivations, or lack thereof, of the two main characters. I kept reading and waiting to try to figure out why the main characters were acting the way that seemed illogical. It left a lot of unanswered questions.

I think the ending would have been great if I could have understand more about the choices that the characters made.

What character would you cut from The Invaders?

I never did get the Steven character- and Jeffrey was just a huge jerk.