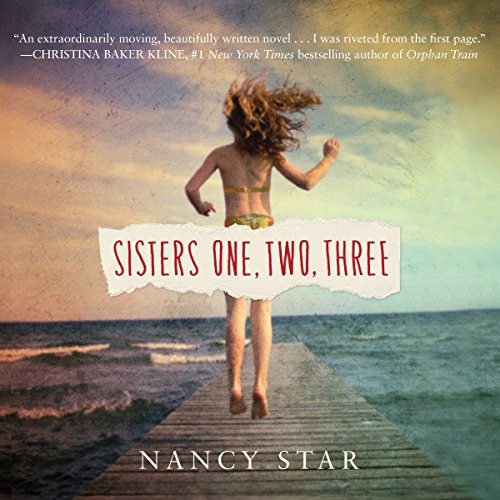 By: Nancy Star
Narrated by: Cassandra Campbell
Free with a 30-day trial

After a tragic accident on Martha's Vineyard, keeping secrets becomes a way of life for the Tangle family. With memories locked away, the sisters take divergent paths. Callie disappears, Mimi keeps so busy she has no time to think, and Ginger develops a lifelong aversion to risk that threatens the relationships she holds most dear.

When a whispered comment overheard by her rebellious teenage daughter forces Ginger to reveal a long-held family secret, the Tangles' carefully constructed web of lies begins to unravel. Upon the death of Glory, the family's colorful matriarch, and the return of long-estranged Callie, Ginger resolves to return to Martha's Vineyard and piece together what really happened on that calamitous day when a shadow fell over four sun-kissed siblings playing at the shore. Along with Ginger's newfound understanding come the keys to reconciliation: with her mother, with her sisters, and with her daughter.

At turns heartbreaking, humorous, and hopeful, Sisters One, Two, Three explores not only the consequences of secrets - even secrets kept out of love - but also the courage it takes to speak the truth, to forgive, and to let go.

What listeners say about Sisters One, Two, Three

Unfortunately this book was hard to follow. I could not tell when it was a different character or when it changed from one time frame to another.

Depressing story, miserable characters. I couldn't make it past chapter 10. I kept waiting for something remotely climactic to happen, and page a after page just downtrodden characters. I read plenty of women's fiction. Rarely do I quit a book.

I pretty much was annoyed and disliked every character in the book. The thing is I don't have to like the characters to like the book I just have to like the characters story. It's like your waiting for someone to do something in any of the different circumstance but it never really happens. I guess I wanted more character development, a little more drama. It's almost like the writer wrote a complete book and than cut out parts because she didn't want it to seem predictable or something. I guess I wanted the book to come full circle but it fell dead for me.

Boring! Could not finish it.

I read some of the reviews and it sounded interesting. I listened to the first 5 hours and gave up.

The ending. Because it was over and I could go back to reading something interesting.

What was most disappointing about Nancy Star’s story?

Inane story about a family with 3 daughters. All of the characters were unlikable and I spent the entire book waiting for SOMETHING to happen.

What does Cassandra Campbell bring to the story that you wouldn’t experience if you just read the book?

Her narration was the only decent thing about this book.

Do you think Sisters One, Two, Three needs a follow-up book? Why or why not?

I really wish I could get those wasted hours of my life back.

Really enjoyed the book about the Tangle Sisters. However, some plot points near the end came unraveled and I was disappointed that some issues the characters were struggling with were unresolved. There also was a chapter that seemed unnecessary and out of place, but that's just my opinion. Overall entertaining.

Would you try another book from Nancy Star and/or Cassandra Campbell?

Would you ever listen to anything by Nancy Star again?

Perhaps it was the material, but I had great difficulty shifting from one timeframe to the next in the recorded version. Also, voices for different characters were at times difficult to distinguish (especially males)

Did Sisters One, Two, Three inspire you to do anything?

I think that reading the book would have been more satisfactory given the complicated shifting of time frames. We read this for my book club. Others, who actually read the book, found it satisfying, but not until getting 70% through the story.

I found the plot simple and disappointing. I can't really recommend spending the time to read it.

Oddly enough, I liked this novel

I generally don’t enjoy novels in which all characters are crazy, damaged, dysfunctional, unlikable, etc. There’s not a “normal” female in the bunch in this story, and the male characters are generally not fleshed out (though all are fairly normal). If the story had not flashed back to the past and what happened in the children’s childhoods in alternating chapters, I would have abandoned this book after the first chapter. But the past did really inform the present so at least I could understand why the women were the way they were.

The writing itself was really good, the story was interesting (both past and present), the characters—at least most of the female ones—were quite original, era was evoked well, setting, at least Martha’s Vineyard, was well described—NJ not so much. And considering all the relationships in this book, I thought the author did a good job of making those explicable.

What would have made this 4 stars instead of 3 is if one of the central plot points made any sense whatsoever. Yes, the decision was made by a crazy woman (and it’s never really clear exactly what is wrong with this woman is in the &quot;past&quot; part of the story) but I could not suspend my disbelief that someone could make this decision let alone pull it off. And once that comes to light, it takes a long time to get to what’s going on with the character about whom the decision was made. In fact, it’s never entirely clear so I found myself rather annoyed while that situation was untangled (no pun intended).

As well, the situation with Ginger’s daughter, Julia was weak. Julia is a cardboard character of surly teenager. She seems more of a device to illuminate Ginger’s issues than anything else.

The audio performer, Cassandra Campbell, really brought the story to life. Had it been a narrator I didn't care for, a less skilled narrator, I might have ended up rating this 2 stars.

this story failed to captivate me... I barely finished... the build up is too long and tidious, too many unnecessary and repetitive details (or maybe I just could relate to the characters? I don't know... also possible), thebculmination is kinddah unexciting and the end is Lifetime-movie sweet... even though the narration is good, I barely finished it, almost gave up mid-book....