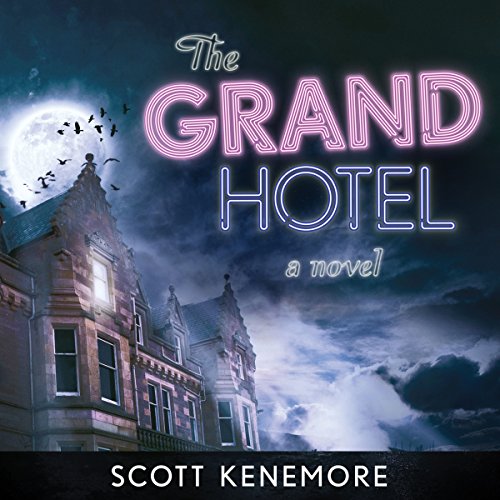 The Grand Hotel: A Novel

By: Scott Kenemore
Narrated by: Christian Rummel
Try for $0.00

Welcome to the hotel where nobody checks out. When a desk clerk welcomes a group of tourists into his mysterious and crumbling hotel, the last thing he expects is that a lone girl on his tour may hold the power to unravel the hidden mystery that has lain for untold centuries within the structure’s walls. The Grand Hotel is a horror novel by esteemed best-selling author Scott Kenemore (Zombie, Ohio) that takes the reader on a thrilling ride through an interconnected series of stories narrated by the desk clerk and the residents of the hotel itself. And while it is not known whether or not the desk clerk is actually the devil incarnate, it is strange that so many visitors who come for a tour of the hotel have a way of never leaving. As the narrator takes you deeper and deeper into the heart of the hotel, secrets that have been hiding for aeons begin to show themselves. Although he is quite prepared for this experience, there is some question as to whether or not the rest of the world shares this readiness. Kenemore's incredible style and originality carry The Grand Hotel to places most people only see in their nightmares. And while we don’t know all of the secrets that lie within the Grand Hotel, we know that the person who does hold that knowledge puts fear into the narrator himself - a thought that ought to terrify everyone.

What listeners say about The Grand Hotel: A Novel

So glad I found The Grand Hotel...

I really enjoyed this! It was included in Audible Plus (which is the best thing Audible have done in ages, btw) so I took a chance on something I might not have spent a credit on.
One gets a fairly clear idea of what’s going on early on, but it grabbed my attention while I was grooming dogs and before I knew it I was half way through - always a good sign.
It’s an easy, entertaining listen. The narrator also did a fantastic job.

I thought this was a great book. It's a series of short stories linked together by an overarching arc of a story. They are ALL good. I wasn't sure about the narrator at first, but he's brilliant. So many different stories, so many different voices. My only complaint is that this appears to be the only Scott Kenemore book on audible that isn't about zombies. I am allergic to zombies. I might be driven to try one at some point, though, because this one was SO good.
If you want a crueler type of horror story, with lots of blood and brains, or lots of the innocent being abused or tortured, then this is NOT for you. If you like a more traditional type of horror story, but set in the modern day (though it really doesn't feel like it, it feels rich and layerd, more like a Victorian style horror or ghost story), then you might like this. :)

What was one of the most memorable moments of The Grand Hotel: A Novel?

The ending is the best part.

What does Christian Rummel bring to the story that you wouldn’t experience if you just read the book?

His different voices are fantastic.

A host with dark intentions

It's not a slasher horror book or anything near. This is more of a tasteful, PG-13 kind of scary book. There are several stories within the story itself, which is great.

At least it was free

Good gravy, this was awful. The only saving grace was the narrator. However, couldn’t even get all the way to chapter 3.

This is my first review. I felt I had to warn others. Can’t understand positive reviews.

I must admit, I was fooled all the way until the end. I thought a theme was emerging, there was, I was just wrong as to what it was. Some of the words used, were (in my humble opinion) misplaced/misused. However, this in no way diminishes the powerful pull of this book.

I seriously thought I knew what was going to happen to the tour group. Gosh Darn, blindsided is all I can say. Finally, I found myself a defacto member of the tour. I wanted to visit the next location, just to hear the next story.

Before I forget, Christian Rummel is an excellent narrator. I swear, at times I thought someone else was narrating

I fully enjoyed the experience of this book. The narrator is wonderfully talented with using different voices for the characters. I felt immersed in this creepy old hotel and these weird but delightful creepy stories. Bravo!

What stories and secrets can one expect to encounter at a venue such as the Grand Hotel? Every minute of the 12+ hrs of this production is majestically narrated. Such a versatile voice, a great array of accents, both with splendid male and female pitches, great cadence command.

The story is very well crafted, and this is the type of audiobook that, even if you step away from it for 2 minutes and return, you don't feel like you missed any vital information. Well woven story of stories. Even minutes after the very end of the book, I am still going back and rethinking and admiring the story. It all makes sense in the end.. or does it really?

Not at all what I excepted....totally awesome

What made the experience of listening to The Grand Hotel: A Novel the most enjoyable?

While I am unimpressed by the book itself, the narration is some of the best I've ever heard.

It took a little while to get into this book, I wondered where the story was going BUT I stuck with it and ended up really enjoying it. The story within a story was different and captivating. The narrator has a pleasing voice, if a little off when attempting Euro accents. This narrative may not be for everyone but those seeking something different will enjoy.

I feel a bit nasty for saying this but it was just really boring. I couldn't get on with it and the accents were really bad.

The Grand Hotel full of residents with stories to tell to the visitors being shown around by a decidedly creepy night clerk. Looking at the reviews for this book it seems to be like marmite well I love it!

Starts of slowly but stick with it as it does get addictive and I thought I had it sussed out but I didn’t. Brilliantly narrated and a freebie from the plus catalog what’s not to like?

I really don’t know because although it started off well I couldn’t listen to it properly as it would not sync across my devices and it just kept repeating the same chapter. Chapter 6 and wouldn’t move on. Otherwise the narrator was good and the story had potential so it’s a real shame.

loved it from start to finish started and couldn't stop. the characters are amazing the story keeps you hooked all the way to the climax

A collection of stories with an interesting end tale

The Grand Hotel has a night clerk escort tourists around meetings some of the guests of the hotel. Each tells a story and there is a final one that gives a reveals at the end.
A good take on one of the popular classics (I won’t mention as it could spoil the ending)
Nice mix of cast telling the stories