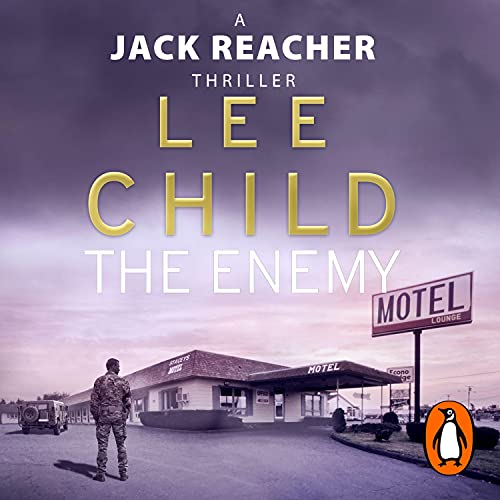 New Year's Day, 1990. A soldier is found dead in a sleazy motel bed. Jack Reacher is the officer on duty.

The soldier turns out to be a two-star general. The situation is bad enough, then Reacher finds the general's wife.

This stomach-churning thriller turns back the clock to a younger Reacher, in dogtags. A Reacher who still believes in the service. A Reacher who imposes army discipline. Even if only in his own pragmatic way...

What listeners say about The Enemy

"The Enemy", the ninth Jack Reacher book, takes us back to January 1990, just after the fall of the Berlin Wall, when Reacher was a Major in the Military Police.

One of the things I enjoyed about the previous book, "The Persuader" was the glimpses it gave me of who Jack Reacher was when he was in the Army. It left me hungry for more. Perhaps it had the same impact on Lee Child because "The Enemy is set entirely in Reacher's Army past.

"The Enemy" is a sort of "Origins of Wolverine" book. it deepened my understanding of how the Jack Reacher I met in the previous books came to be the way he is.

"The Enemy" explores how the US Army works via an investigation into the death of General. The plot is tight, complex and satisfying, spiced by conflicts with an asshole superior officer with an agenda and a larger mystery around a coordinated but unexplained large-scale re-assignment of Special Unit MPs.

I know nothing of the US Army other than what I've seen of their bases in Germany and the UK but I found Child's depiction of it convincing and compelling: the sheer scale of the organization as it was back then, the way bases are the same everywhere in the world, right down to the menus in the Officers' Club, the power of rank, the freedom to work the system, the complete lack of control on where and under whom you will serve.

I enjoyed seeing Reacher outside the US, in Germany (where the US bases make everything seem as close to home as possible) and France in which Reacher, son of a French woman, seems more at home than in North Carolina. I was fascinated to see how Reacher behaved with his older brother, a man who was killed in the first Jack Reacher book, "Killing Floor" and who's ghostwad evoked in the sixth book "Without Fail" when Reacher is approached by his brother's ex-girl friend.

Reacher in 1990 seemed less damaged and less lost than the Reacher in the other books. The Army and his family give him stability and a sense of purpose. It becomes clear how the loss of these things would change him for the worse.

But the 1990 Reacher is still recognisable. The things that make him scary are already present: his tendency towards violent confrontation, his inablity to let things go, his habit of using others to achieve his own agenda and his willingness to appoint himself as both judge and executioner. The things that prevent me from writing him off as a psychotic thug are also there: hisdrive to do the right thing, his willingness to take the consequences for his actions and his strong desire to keep the Army the way he thinks it should be.

"The Enemy" is a well-written period criminal investigation novel that would be attractive as a stand-alone novel. The insight's that it brings on Reacher's origins move it up into a compelling read and encourages me to thank that the Reacher novels will continue to get better, which is good news as I still have eleven more to go.

As usual, an entertaining book, but a bit slower than the other Jack Reacher books.

And it reads like a murder mystery. I thoroughly enjoyed it and Jeff Harding is a great narrator.

A long, good value, crime solving story. I was hesitant about reading on of Child’s in first person, but it turned out to be one of his better ones.

Where does The Enemy rank among all the audiobooks you’ve listened to so far?

The Enemy is of a very high standard and very much like Lee Child's other Jack Reacher books, an in-depth journey into Whitehouse politics and murder

You cannot rate anyone in a Jack Reacher book any higher than Jack Reacher himself. A very convincing portrait of an ex-army policeman with all the skills, knowledge and experience of someone who grew-up as an army child

What does Jeff Harding bring to the story that you wouldn’t experience if you had only read the book?

I believe Jeff Harding is one of the greatest US voice-over artists that has ever been used to read USA-based audio books. As a blind reader of thriller audio books, I have listened to a large number of his audio books and I marvel at his capacity to not only make the books interesting but to read in so many different voices and dialects, even British English on some occasions! I rate Jeff as one of the best.

Without giving much away, the scene where the vice President was visiting a homeless shelter to serve lunch was the most moving part of the book

I rate this book as one of the best in the Jack Reacher series.... although I must say, I have already read seven and they are all brilliant

The story was well planned out and kept me guessing.

Jeff Harding narrating made it all the more easy to listen to, he is the best.

Which character – as performed by Jeff Harding – was your favourite?

Another great Jack Reacher novel. The plot was interesting and action packed. If you like the series or the genre you'll like the enemy, a real listener/page turner.

A waste of time

I am a big fan of Lee child jack teacher books but this one was a waste of time. It went no where and was a never ending chase of useless clues with a terrible plot and lack of building any interesting characters. I will try one more in his series but not for awhile. After this one I need a break

With a gripping story line and excellent narration this was another excelent thriller from one of the best modern writers of today. This is my third Lee Child audio book in a row and will probably be my next choice when my next credit comes due.

As a fan and having read all the books and short stories, I have to say Jeff Harding by far has been the best narrator. He has brought Reacher to life in a magnificent way. His tone of voice aptly represents the verbal description of the character that Lee Child has painted from Book one onwards. Excellent story and well narrated.

As per usual a hugely enjoyable Lee Child novel. Just brilliant. Jack Reacher is the best.

alright not the best story line

female voices are pretty bad lol but other than that well read. story isnt as good as his other novels

a perfect way to pass time

Excellent to listen to, makes a dull day of work more barrable. pulls you in to the story and feels like you can almost picture your self being involved with the characters.

fabulous narrating,engrossed from the start. ideal to put the head phones on and go for a walk with the dog

I'm slowly working my way through Lee Child's offerings and that includes his Reacher novels. The Enemy is an important chapter of the Reacher story. Not only because it shows where some of his values come from and his desire to do the right thing, but it also highlights a darker side to Jack Reacher in his execution of justice and where it may have originated. I was shocked at the ending but not really surprised. I love the detail of the weapons and the ballistics captured in this book.

Quite the adventure. thoroughly enjoyed this novel. Jeff does another Wondeful job of bringing it to life.

I was worried about going back in time to when reacher was in the army. I shouldn’t have been worried this is one of the best, classic reacher with a pleasing if sad interface with his family. And more insight into the sociopathic side of reacher. You have to concentrate as it moves through countries and characters but eventually all the threads join to a shocking but satisfying ending. Thoroughly enjoyed it.

I am in love with this series

Great to have Lee Child take us back to Reacher in the Army and to find out a bit more about his brother and Mum.

A strong beginning for the series

Even though this is the eighth book in the series, it's the first chronologically, and the first one I read. It was enjoyable, so much so that I read it in 36 hours. Looking forward to the next one. It's a bit more thoughtful unusual detective/action genre, which makes for a very good read.

A new style for me. Good technical knowledge. Fair weave of complexity for first book.

Even thou this is set in 1990 it is so relevant to our current day and the changes that are always underway with any country's military system. Very clowe to home thiw tory to me and loved it from start to finish.

Intracally woven storyline that challenges the reader to pick out the clues. Twists and turns throughout. A sheer pleasure to read. Sad for Reacher but he always does the right thing. What a good guy. Thanks Lee and Jeff.