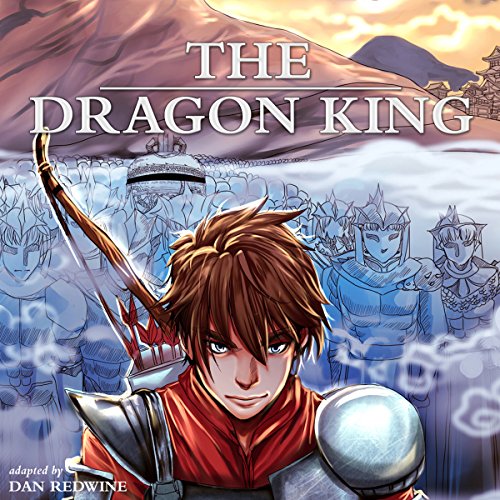 By: Dan Redwine
Narrated by: Ken MacMillan
Try for $0.00

The brave Japanese warrior Fujiwara Hidesato was always in search of action and adventure... and he suddenly found them one day on the beautiful Lake Biwa. When the Dragon King asked for help to defeat the terrible centipede that was threating his kingdom, Hidesato readily promised to do what he could to help him.

This entertaining Japanese fairy tale has all the right ingredients of a great story for young readers: dragons, adventure, warriors, magical rewards, and beautiful underwater castles. Nation9 is excited to bring this timeless Japanese story to a new generation of listeners.

What listeners say about The Dragon King

I quite often listen to audiobooks with my kids, when I saw this short (short!) story pop up with the description "The brave Japanese warrior Fujiwara Hidesato was always in search of action and adventure..." I was quickly interested.

Our first listen was in the car -- a 13 minute story is about perfect for a drive to or from an errand. Both kids (my son is 6 and my daughter 4.5) listened with rapt attention, with a few questions, e.g. "What is a quiver?" But the true test is whether they request a re-listen. (I know this from telling them my own stories; no matter how proud I might be, and how I think they liked it the first time, a second hearing? Most likely, not a chance.) Well, this one did pass that test, both kids wanted to hear it again later, and again listened attentively.

The story adapts a Japanese fairy tale "My Lord Bag of Rice" in which a young warrior Fujiwara no Hidesato encounters a dragon princess and slays a giant centipede for her, earning magical gifts. In other versions, rather than turning into a princess, the dragon becomes a "strange small man" -- the eponymous Dragon King, but other essentials remain. It's told quite straightforwardly and to a young reader's understanding, with a few possibly new words to consider (e.g. "quiver", above) and some vivid visual descriptions, particularly of the giant centipede's emergence from the mountain. There are some typical fairy tale features here (naturally Hidesato has three, and only three, arrows, and needs each and every one of them) but overall it was definitely something different for both me and the kids and we enjoyed it.

Some nitpicks on the (overall excellent) narration and production:

* Pronunciation of "horror" was a teensy bit suspect
* Gaps between sections were overall much too long - particularly next to last or so.
* Conversely, gaps at beginning and in particular the end were too short.
* One section - the first appearance of the centipede on the mountain - was noticeably quiet compared to the rest.

These are noticeable and fixable issues which (other than "horror" which is I suppose acceptable) I would expect a professional production to correct. I do have another suggestion for future releases: A good choice of intro and (in particular) outtro music would have been excellent improvements here. The story does (as fairy tales often do) end abruptly, just in time for the closing credits to rush right in, dispelling the created mood.

I've never heard Ken MacMillan narrate before and he seemed exceedingly well cast, and did a good job with the story, with enough animation in his reading to keep kids interested. Overall: definitely pick this one up for your wee listeners, though I do hope Nation9 fixes some of the production glitches, and make sure you are careful to not use a credit rather than the retail/member price.

Nation9 also has produced an Android App which combines text, illustrations, animation, and narration, and a Kindle version which has at least some of the same illustrations as well, minus the narration and animation. These aren't applicable to me (I don't have such a device) but the App might be of interest for listeners as well.