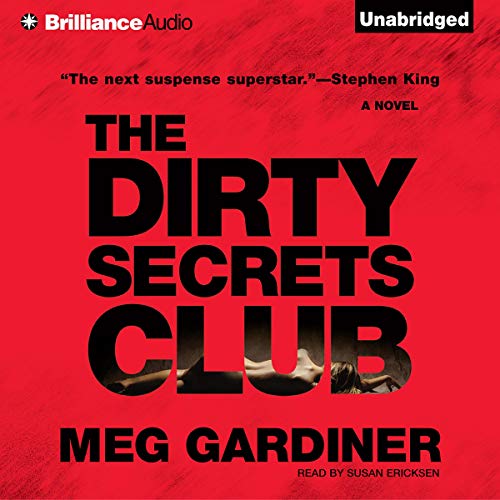 By: Meg Gardiner
Narrated by: Susan Ericksen
Try for $0.00

An ongoing string of high-profile and very public murder-suicides has San Francisco even more rattled than a string of recent earthquakes: A flamboyant fashion designer burns to death, clutching the body of his murdered lover. A superstar 49er jumps off the Golden Gate Bridge. And most shocking of all, a U.S. attorney launches her BMW off a highway overpass, killing herself and three others.

Enter forensic psychiatrist Jo Beckett, hired by the SFPD to cut open not the victim's body, but the victim's life. Jo's job is to complete the psychological autopsy, shedding light on the circumstances of any equivocal death.

Soon she makes a shocking discovery: All the suicides belonged to something called the Dirty Secrets Club, a group of A-listers with nothing but money and plenty to hide.

As the deaths continue, Jo delves into the disturbing motives behind this shadowy group - until she receives a letter that contains a dark secret Jo thought she'd left deep in her past, a secret that ends with the most chilling words of all: "Welcome to the Dirty Secrets Club".

"If you read Sue Grafton, Lee Child, Janet Evanovich, Michael Connelly, or Nelson DeMille, you're going to think Meg Gardiner is a gift from heaven." (Stephen King)
"Meg Gardiner is an astonishing writer, and The Dirty Secrets Club is a humdinger of a thriller, with shocks and twists galore. I couldn't turn the pages fast enough." (Tess Gerritsen)
"A winner in every way. The Dirty Secrets Club is nuanced and layered - and a harrowing thriller....Meg Gardiner makes every one of her characters leap alive off the page." (Jeffery Deaver)

What listeners say about The Dirty Secrets Club

REALLY mundane, predictable and boring. Even the sex I found boring. Sorry, the author is probably a nice person so I hate to be mean but.......... made it thru about 4 hours.

Really poor dialogue. The story has a pretty good premise, but I couldn't get over the exchanges b/w characters. The narrator does a nice job.

Yes. The story line is unique and unusual. It is fast paced and interesting. I did not know what was going to happen and had a lot of suspenseful moments listening. I remember a couple of times making noises out loud when it would get exciting, which I find to be a real mark of success for both the narrator and the author.

What was one of the most memorable moments of The Dirty Secrets Club?

The plot - you will not be able to figure it out until the very end. Even then, you will still wonder a bit and think it through.

Have you listened to any of Susan Ericksen’s other performances before? How does this one compare?

Yes. I love Susan Ericksen's narrations. This was good and I did not think about the other stories she narrated at all - meaning she made this story its own and I did not compare these characters to others she has created with her voice and inflection.

Confused a lot and then the answers came at the end. It made me think and wonder.

I am only about 20 minutes into it but already I am having a problem with the reader. The dialogue between the two characters in the first chapter was read with such an overly dramatic flourish it was over the top. I guess the book itself will be okay as long as there's no dialogue. If she were to just read the book without the melodramatics, I think it would be pretty good, but I am not sure I'll be able to get past it.

This narrator is doing opera -

What disappointed you about The Dirty Secrets Club?

I cannot finish this book. Meg Gardiner stories are ususally pretty good and this one might be - but the narrator PRONOUNCES each sentence. Sounds like she thinks I bought the book to hear her perfect diction. I remembered after the first few minutes that I just hate the way this person reads.

Would you be willing to try another book from Meg Gardiner? Why or why not?

Would you be willing to try another one of Susan Ericksen’s performances?

NO!! I didn't mean to ever listen to her murdering a good book again. I slipped up and downloaded this one. I will be more careful. I didn't return it because I need to keep it to remind me not to buy any more of her stuff. ouch.

anger at the murder of a good story

Narrator ruined it for me

Her voice is harsh — not melodic at all. It literally irritated me to the point it interfered with me following the story line. I couldn’t finish the book.

Story was captivating. The voice work and each character having their own unique voice was jarring at first, and did take away from the story, but by the end of the book it was not as distracting.

The story was ok. Excepted it to be more exciting. The woman voice who read the book was terrible. It drove me nuts to the point I almost didn't finish it.