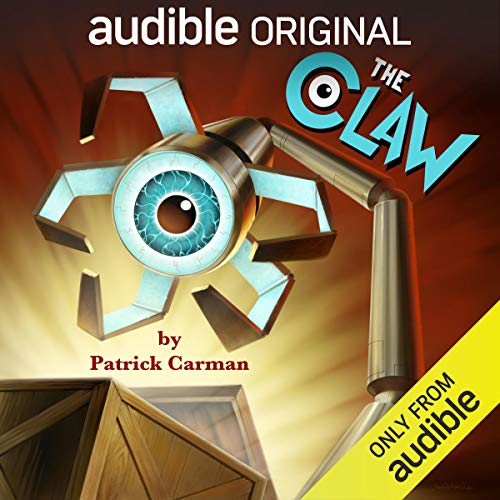 Sneak Peek of The Claw

The Claxton Lore and Apparition Warehouse is located on a remote private property in the deep swamps of Louisiana, and overseen by a robot designed by Mr. Claxton, called CLAW. The warehouse is filled with a maze of crates labeled with things like The Beast, Mr. Mason’s Jars, Snap, The Atomic Ants, which are filled with the things of legend, and it is CLAW’s job to make sure the objects don’t get out. But CLAW is a curious robot, and what lay inside these crates just may make their way out and haunt the imaginations of listeners everywhere.

Patrick Carman is the award-winning author of many books for young adults and children. He spent a decade living in Portland, where he worked in advertising, game design, and technology.

What listeners say about The Claw

I love this audiobook. It is a go to audiobook for spooky stories with humor.

A very fun story, well read. The right kind of spiky for kiddos. Can't wait for a sequel.

It was so scary and fun

I love this podcast I think the voice, the story and the sound is great

Listened with my kids, a fun spooky podcast .
I hope they make more episodes soon!

strange and kind of corny

It was just too weird. Too many sound effects. My kids and I couldn't finish it. We gave it a chance and kept waiting for it to get better but we just couldn't get into it.

This was a fun spooky tale of a haunted artifact collector who stores his finds in a warehouse called the Claw. The Claw itself is a massive robot with a curios nature. The collector shares stories of some of his artifacts in this delightfully spooky tale. Each one is different. The production and cast are wonderful. Great for the whole family. Very enjoyable.