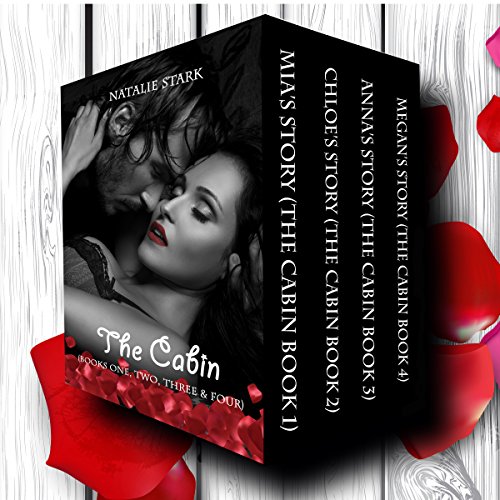 By: Natalie Stark
Narrated by: Johanna Fairview
Try for $0.00

Book One - Mia's Story: When Nathan Chaplin stepped out of the rain and into Mia's life, she believed at last she could put her sinful past behind her. But on her wedding night, Mia knew she could no longer keep her secrets from her new husband. out into the mountains for the secluded honeymooner's cabin, Anna's past finally catches up with her. Separated from Nathan in a freak storm, Anna finds herself alone in the cabin with another, who reawakens those dark and forbidden desires within her.

Book Two - Chloe's Story: Feeling neglected by her husband Ben, twenty-five year-old Chloe Wells, spends much of her time fantasising about the men she comes across in her everyday life. Desperate to bring some romance back into her sexless marriage, Chloe books a night for her and Ben at The Cabin. But The Cabin has a way of changing things. It brings out what we most desire and turns fantasies into reality. Those who visit The Cabin never leave feeling the same again.

Book Three - Anna's Story: When Anna decides to leave her husband, she makes for a remote cabin on a desolate mountainside, where she has arranged to meet her lover. With a bag of stolen money and paranoid that she is being hunted by the police, Anna reaches the cabin. But when a stranger arrives, Anna's escape doesn't go according to plan. She discovers a daring and sexy side to herself that she didn't know existed.

What listeners say about The Cabin

I really wanted to like this book but I had a BIG issue with all of the cheating and deception. I sort of liked the ending of the last book, that was a twist I wasn't expecting. I would not recommend this to anyone.