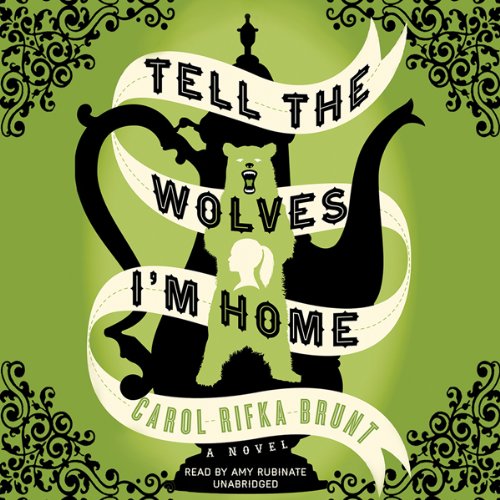 By: Carol Rifka Brunt
Narrated by: Amy Rubinate
Try for $0.00

In this striking literary debut, Carol Rifka Brunt unfolds a moving story of love, grief, and renewal as two lonely people become the unlikeliest of friends and find that sometimes you don’t know you’ve lost someone until you’ve found them.

1987. There’s only one person who has ever truly understood fourteen-year-old June Elbus, and that’s her uncle, the renowned painter Finn Weiss. Shy at school and distant from her older sister, June can only be herself in Finn’s company; he is her godfather, confidant, and best friend. So when he dies, far too young, of a mysterious illness her mother can barely speak about, June’s world is turned upside down. But Finn’s death brings a surprise acquaintance into June’s life - someone who will help her to heal and to question what she thinks she knows about Finn, her family, and even her own heart.

At Finn’s funeral, June notices a strange man lingering just beyond the crowd. A few days later, she receives a package in the mail. Inside is a beautiful teapot she recognizes from Finn’s apartment and a note from Toby, the stranger, asking for an opportunity to meet. As the two begin to spend time together, June realizes she’s not the only one who misses Finn, and if she can bring herself to trust this unexpected friend, he just might be the one she needs the most.

An emotionally charged coming-of-age novel, Tell the Wolves I’m Home is a tender story of love lost and found, an unforgettable portrait of the way compassion can make us whole again.

Carol Rifka Brunt’s work has appeared in several literary journals, including the North American Review and the Sun. In 2006 she was one of three fiction writers who received a New Writing Ventures Award, and in 2007 she received a generous Arts Council England grant to write Tell the Wolves I’m Home, her first novel. Originally from New York, she currently lives in England with her husband and three children.

“A gorgeously evocative novel about love, loss, and the ragged mysteries of the human heart, all filtered through the achingly real voice of a remarkable young heroine. How can you not fall in love with a book that shows you how hope can make a difference?” (Caroline Leavitt,  New York Times bestselling author)
“Tell the Wolves I’m Home is a charming, sure-handed, and deeply sympathetic debut. Brunt writes about family, adolescence, and the human heart with great candor, insight, and pathos.” (Jonathan Evison,  New York Times bestselling author)
“Tremendously moving…Brunt strikes a difficult balance, imbuing June with the disarming candor of a child and the melancholy wisdom of a heart-scarred adult.” ( Wall Street Journal)


The AIDS crisis is a devastating part of history that should never be forgotten. The epidemic led to the death of more than 25 million Americans and contributed to the health struggles of countless others. The audiobooks on this list confront the harsh, heartbreaking realities of the AIDS epidemic. Each of these listens helps commemorate a dark part of our nation’s history and honor those who lost their lives to the bigotry that built barriers to treatment and care.

What listeners say about Tell the Wolves I’m Home

I recognize that -somehow- this is important YA fiction. As a concept, the AIDs crisis as experienced by a fifteen-year-old girl with a sick uncle is interesting. In practice ... oh man, the boredom. The terrible terrible boredom.

This protagonist is just the worst, and you're stuck in her head hearing her voice the whole damn time.

She's fifteen but acts like she's twelve. She's -obsessed- with her uncle -sexually-. This kid probably writes endless Cersei/Jaime fanfic with herself and her uncle MarySued into the story. She doesn't seem to have friends. She kind of just roams around the woods in a medieval dress that's too small because it is meant for a child. She makes believe that there's wolves because she wants to be a child. Seriously, she has a conversation with another character who tells her flat out there are no wolves and she's just like, no, I don't want to hear that, I'm playing make believe.

Did I mention that she's a whiny privileged brat? Well she is. She calls herself an "orphan" because during tax season her parents have to work late so they're not waiting at home for her when she gets off the bus. They come home at like 8pm. Ooooh the hardship. Just like a real orphan. Must be terrible to be alone for a few hours while your super rich parents are making tons more money.

I couldn't finish this book. It was the worst. I wanted to like it so much. I wanted to get into the experience of a young person coming to grips with what AIDs is in a time when America did not accept homosexuality. There is an interesting story in there somewhere. It was too hard to listen to, even in the car.

Has Tell the Wolves I’m Home turned you off from other books in this genre?

I never want to hear anything told from the POV of an emotionally stunted, immature, incest-obsessed, maudlin, teenage girl again. This character was somehow worse that Bella from twilight. It defies logic, and yet it happened.

Would you be willing to try another one of Amy Rubinate’s performances?

Sure. She was fine. I just associate her with the worst high schooler ever, but maybe a different book will turn that around.

story of a selfish awful family of people

this is a tough book to rate and review. i found most of the main characters so selfish and self consumed, it was hard to feel any genuine empathy or sympathy for them. both sisters at the heart of the story were horrid girls. i kept trying to convince myself they weren't so bad...that they were just teenagers...but i just couldn't excuse their behavior.

i think that parts of the story, the study of human behavior and misinformation at the beginning of the AIDS crisis, were quite interesting. i was too young when this story took place to know that this is how people reacted to someone with AIDS. it made me sad. it made me mad.

but the actual family this story revolved around, i didn't really care for or about, and so i have a hard time saying i liked this book.

Would you try another book from Carol Rifka Brunt and/or Amy Rubinate?

No, I would definitely NOT try another book by this author. Very weird story. A fourteen year old in love with her uncle? Absentee parents - her sister is a horrible person. It was all too much to believe. And the narrator? No thank you! Others have described her as very flat and lifeless. That's an understatement.

What could Carol Rifka Brunt have done to make this a more enjoyable book for you?

She could have refrained from writing such a ridiculous story.

She was very 'breathy', almost whispering at times, reminiscent of Marilyn Monroe. And very painful to listen to. Much too monotone.

I still cannot believe I finished this book. I almost never quit a book once I start it. I'm always hopeful something will make it better. Well, this one proved me wrong and only got worse. More than a few times during this book I wanted to move on - I now know that's exactly what I should have done. Spared myself the agony of finishing this awful piece of nonsense. Seriously? A fourteen year old takes a dying aids patient out of a hospital in the middle of the night and brings him to her parents home? Knowing how her parents feel about this man? And the cage in the basement? Who is giving this book five stars? Pranksters?

The narrator's cartoonish voice makes this poorly-written story an even bigger disappointment. It was recommended because I enjoyed The Goldfinch. This is nowhere ^near^ the caliber of The Goldfinch.

I enjoyed the story and its themes. It brought me back to a time when I was a young woman. That said, I just couldn't stomach the narrator. She was so flat and lifeless. I just got a recommendation from Audible for another book I might enjoy, which is probably true, except that Amy Rubinate is the narrator. I'll skip that one!

This book reminds me how far our society has come in the last few decades. Wonderfully written story that is applicable to my life. I've listened to it many times. One of my favorites!!!

A picture is worth a million words

Would you listen to Tell the Wolves I’m Home again? Why?

Tell the Wolves I'm Home was very interesting and an easy listen but, I'm undecided on if I would listen to it again. The narrators voice seemed very electronic and flat at times which really threw me off at times. Perhaps I would read the book though.

What other book might you compare Tell the Wolves I’m Home to and why?

I could not compare this story with any other that I have read personally.

Did Amy Rubinate do a good job differentiating all the characters? How?

Yes, when it came to the characters Amy Rubinate performed awesomely at making each character his or her own. However the generic narration would be a bit flat and monotone at times, it sounded like a operator recording.

Love Against All Odds

I had no trouble finishing this but don't know if I could recommend it to others. It is a story of relationships, deep and true and unlikely and sometimes, inappropriate.

I don't understand all the praise

I don't know why I can't quit a book once I've finished. But this one had so many five star reviews and 'important' praise that I expected the greatness to be just a chapter away. But unfortunately, it wasn't.

This book is not worth 3.95! Maybe .50 if you are desperate for a book. I could not believe such a great title could be all bad,..worst of all, I didn't get it as a Daily Deal...