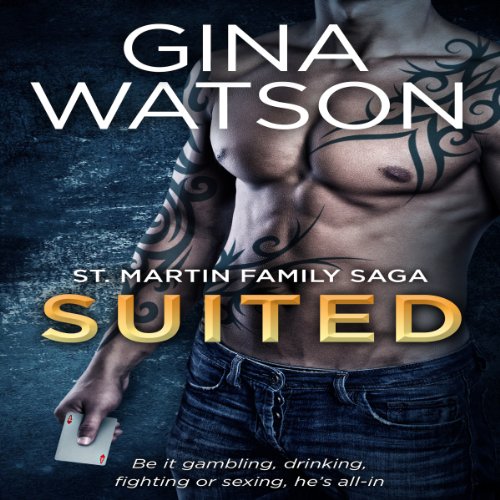 By: Gina Watson
Narrated by: Todd Lorenz
Try for $0.00

He's a gorgeous tattooed millionaire bad boy and he's headed back to his roots, and to her. Cash made his fame and fortune at the Vegas poker tables, now he's headed home to Whiskey Cove, Louisiana. Little does he know, the woman he left behind still waits for his return.

After eight years as a professional poker player, Cash needed a break. The endless glow and ceaseless action of Vegas had lost its luster and his interest. As he trucked crossed the Louisiana state line he thought of her. The woman he'd left behind eight years ago. She'd been everything and he'd left to become a better man for her. He never thought it would take him eight years, but he'd been no good for her, for his family, for anyone. He'd lost her and his heart and he'd no hope of getting it back. She was the only woman he'd ever loved.

Isabela wasn't the same girl she was eight years ago. She was a woman now. A successful one. She'd survived the tribulations life had thrown a her - three times. She was smart, driven, and tough. Only one thing could derail her now but she knew the chances she'd ever see him again were low. That's why when he stood across from her on Louisiana soil, she had no hand to play. She would try hard to resist him, but she knew ultimately she'd fail.

She'd haunted his dreams and now she was a touch away and he wouldn't be able to resist her.

When his hands drifted into her hair its silkiness drove all his senses into overdrive and he had to have her. He hoped she'd let him because he had no intentions of folding.

How many times had she thought were she to see him again she'd punch him square in his too gorgeous face?

What listeners say about Suited

This is similar to all of the other romances about a man and woman who were together when they were younger, then apart, then, surprisingly, back together after years apart. In this case, Lisa and Cash were together for 3 years 8 years ago. Now they have accidentally met up again when Cash returns home. The way this transpired was okay. But having sex immediately upon seeing each other and doing so without a condom, after 8 years apart, was just plain stupid. The sex was barely, barely erotic. He used the word pu**y, and fluid was spoken of once or twice. But I don’t think that amounts to erotica IMO; but for some people it might be too much. Also, these scenes were all quite short. There were two conflicts in this short story, and both were fixed a bit too easily. Though, I’m happy that Lisa gave a bit of a fight, kinda. But there was no real struggle. Finally, the author gave inadequate attention to the small things that make a story plausible. Like, how did Cash get to his car from Lisa’s apartment when she drove? The story goes from him leaving her house to him driving home. What?! And there’s more of that. Similar to these oversights, the author wrote, “She cried through her tears.” Does that make sense? I don’t think so. So, overall, the story wasn’t bad or horrible, but it didn’t hold together enough for me nor ignite any real fire. And the narrator didn’t help. I hated the narrator’s voice for Lisa. His voice is too deep for female voices apparently. And he was overly dramatic at times, which was yuk.