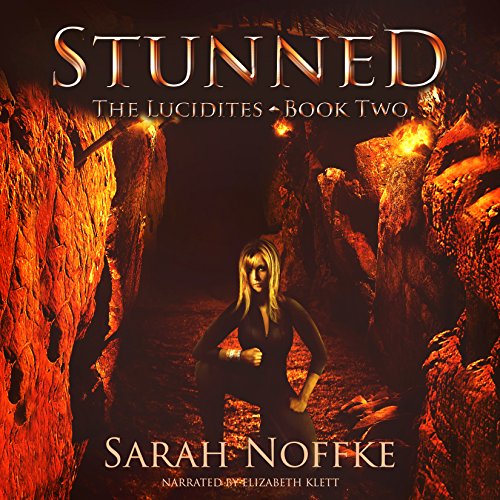 Roya desperately wishes she was above ground on a sunny patio watching the lake lap up on the shore. Instead, she finds herself trapped with the Lucidites. Her brother is mysteriously wasting away, and, at every turn, she finds a new betrayal. Just when she thinks she's finally escaping the Institute, a new danger unveils itself. A secret society of Dream Travelers has declared war on the Lucidites by abducting a head official. It's up to Roya to figure out who's behind it and how to save everyone she cares about most.

More action packed than its predecessor, Stunned is captivating and will leave listeners squirming from the tension but also begging for more.

What listeners say about Stunned

What was one of the most memorable moments of Stunned?

Great 2nd installment even though teenage love triangles can be annoying, but everything else was good. The bomb dropped at the end .I have to get the next book in the series.

The second book in the Lucidite series is an exciting and suspenseful adventure. Roya and her group is once again called upon to complete a dangerous mission. This time it is to rescue the Lucidites scientist, Aiden, who is also Roya's on again, off again love interest. Aiden has been captured by the Voyagers, a break away group of mentally talented Lucidites who want the technology that the scientist can provide. The great twists and turns and ongoing character development is amazing. I love Ren's dark sarcasm and caustic personality, it makes you want you get inside his head to see why he is as standoffish as he is and why he hates the Voyages so much. Roya stays true to her teenage character but you can still see her growth. Her struggles to sort out her emotional attachments to her twin, the two love interests in her life and the Lucidite society is complex and lifelike. My heart aches for George and Joseph, and I love the continued interweaving and maturation of the secondary characters. I am looking forward to seeing how things will develop in the next book. The shocking twists at the end of this book is captivating and leaves you rushing to get the next in the series. The narrator did a brilliant job too, she managed to make you feel all the characters emotions and defined their distinct personalities excellently. This book is a bit less techie than the first book but there are still some interesting gadgets in there. I received this audiobook from the author in exchange for an honest review.

Sarah created an amazing universe with the Dream Travelers. So glad she is sharing it with us!

If you could sum up Stunned in three words, what would they be?

What was one of the most memorable moments of Stunned?

That she brought it to life

Filled with Suspense and Intrigue

What does Elizabeth Klett bring to the story that you wouldn’t experience if you just read the book?

The narration by Elizabeth Klett continues to be excellent. She is consistent with how she portrays each character, which allows for a seamless transition from book to book. Also, Roya’s passionate and fiery personality comes through clearly with Elizabeth's narration.

This is a great continuation to book one. All the characters are further developed and become more interesting as does the institute and therefore the story. The suspense is non-stop with Joseph up to something that you’ll never guess as well as with the team getting into a situation that seems impossible to get out of. The romance triangle between Roya, George and Aiden continues to become more complicated. I feel for Roya in the romance department since both Aiden and George seem very worthy of her affection – but no resolution to that in this book. I recommend continuing on with this trilogy.

The Lucidites, along with Roya's help, have defeated the big bad Zhuang, now what...Roya desperately wants to return home with Bob and Steve, back to a normal life, but her twin brother Joseph pleaded with her to stay. Joseph is working on a secret project that concerns Roya, and he needs to draw from her energy to complete it, but he doesn't tell her that! Roya is still stuck in a love triangle with George and Aiden, and everyone is working on a project but her! What in Pete's name can happen with all this!
Although the team just came from a huge, yet successful, could-have-been-world-ending mission, everyone is back to business as usual. I mean, they lost their healer, and Joseph almost died! Roya is moping around because she's not getting her way, and avoiding both Aiden and George instead of dealing with things head on. I can appreciate the complicated situation between the two boys because she feels for both of them, but come on! Rip the damn Band-Aid off! I reflect...they are young and naive. While Roya deals with not dealing with the boys, she pushes Joseph to tell her what the project he is working on is, because it seems to be affecting him physically. Once Roya finally gives in to peer-pressure, she accepts a project from Shuman. The project is more of a job, and the job is news reporter. Roya must use her psychic ability to see potential threats, and then report them. Now that Roya is busy, and attention diverted, Aiden goes missing!

You will have plenty to keep you busy trying to figure out what is going on in this book! The rescue mission is not the focal point of the story, nor does it monopolize the book. This incident is created to add another layer onto the story as a whole. I learned more about the Lucidites’ history and key players. Although they do have a new threat, the play also opened doors for Roya that will allow her to not only know how to deal with what is happening, but understand why as well. The struggle Roya is having with George and Aiden is real, and will threaten to tear her apart. And then the ending! She pulled a Star Wars move on me at the very end of the book! All I'm saying is “Luke, I am your father”, OMG! That's it. I didn't spoil anything, right? So yeah, the ending isn't a cliffhanger, but is a huge white elephant in the room moment.

So let’s recap!
Roya may or may not have killed Zhuang in the previous book (verdict is still out).
New bad guy “Chase” in play now.
Whitney is still dead.
Trey is still a lying, manipulative prick!

Book three should be a bang! Totally looking forward to it!!

Elizabeth Klett continues as the narrator for this epic series The Lucidites. Elizabeth has been a great story teller for Roya Stark. I fell into an easy comfort with her voice, and really felt like she was portraying the characters as real, as if it were her own life being played out. I enjoy her subtle change in tone for the men, and really well interpreted voices for all the females. 5 stars for a job well done Elizabeth!

**Audiobook provided by the author for an honest review**

I loved this book and the narrator made me feel like I was right there with the characters.I will definitely reccomend this book to friends.

She really conveyed the characters personalities and it felt like she was the main character.Her voice is pleasant to listen to.

This book was amazing and I can't wait to hear what happens to all the characters I grew to love.

I would highly reccomend this book to every fan of the YA and sci-fi genres.I received a copy of this audiobook from the author in exchange for an honest review.

THIS IS A GREAT STORY!!

Would you listen to Stunned again? Why?

I just might..starting with book 1...

Which character – as performed by Elizabeth Klett – was your favorite?

There were several...but the end with Joseph really truly thinking he had found their father...my heart hurt for him!

I think this one was better than book 2...yes we still have Roya and her teenage angstyness...(yes it is a word...lol) But she is strong...and she really cares about the ones around her..again we have her facing down a big bad to save her fellow lucidites and almost dying...and she came through with shining colors...but her suspicions are valid about Zhuang...and could it be true..is he the parent her brother has been killing himself looking for? Glad I have #3 in my library...because I am on it!!!

Good story and narration...cant wait to see where it ends!!!

i loved this series of books. great read. i would find myself at work thinking about them and wanting to listen to it rather than work. loved these. highly recommend

Where does Stunned rank among all the audiobooks you’ve listened to so far?

What other book might you compare Stunned to and why?

I can't. This is so unlike any others I have read. I would recommend any of Sarah Noffke's books

Have you listened to any of Elizabeth Klett’s other performances before? How does this one compare?

If I could I would

Another great installment of this series, very well narrated. A few surprises and quite a cliffhanger at the end.

As is always the case...