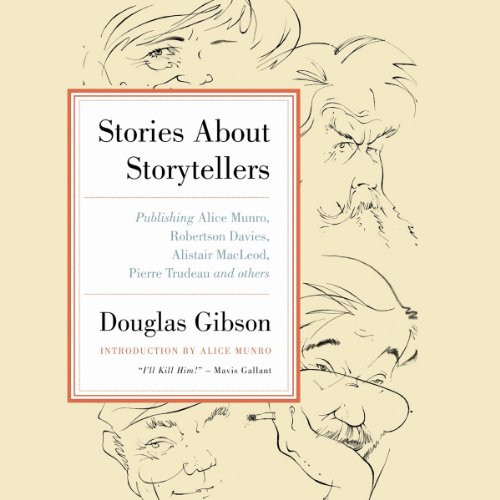 Spotlighting an extraordinary career, this autobiography reviews the author’s accomplishments working and playing alongside some of Canada’s greatest writers. These humorous chronicles relate the projects he brainstormed for writer Barry Broadfoot, how he convinced eventual Nobel Prize contender Alice Munro to keep writing short stories, his early morning phone call from a former Prime Minister, and his recollection of yanking a manuscript right out of Alistair MacLeod’s own reluctant hands - which ultimately garnered MacLeod one of the world’s most prestigious prizes for fiction. Insightful and entertaining, this collection of tales provides an inside view of Canadian politics and publishing that is rarely revealed, going behind the scenes and between the covers to divulge a treasure trove of literary adventures.

What listeners say about Stories About Storytellers

A Gem of a book

This is a literary memoir of Douglas Gibson the dean of Canadian publishing. He was born is Scotland, educated at St Andrews, received a scholarship to Yale. After graduating from Yale he immigrated to Canada. His first publishing job was with Doubleday of Canada. He went on to MacMillan then to M&S a Canadian company. This book is stories about the authors he edited and published. He did not include authors he published but was not the editor. It reads as the who's who of Canadian literature. Gibson is a great storyteller and when you finish this book you will feel as if you know each of these authors as well as their major books. He tells stories about such notables such as Nobel contender Alice Munro, as well as famous Canadian authors such as Stephen Leacock, W. O. Mitchell, Hugh MacLennan, Robertson Davies, Mavis Gallant, Morley Callaghan, Val Ross, James Houston Alistair MacLeod. He also covers political authors such as Brian Mulroney and Pierre Trudeau. This list only a few, so I am sure, your favorite Canadian author may also be covered in the book. After reading this delightful book I feel comfortable with my knowledge of Canadian authors and have an insight into the ups and downs of Canadian publishing. I also feel as if I had a tour of Canada. I also acquired a list of books I want to read and places I want to visit. If you are a reader I am sure you will also enjoy this book.