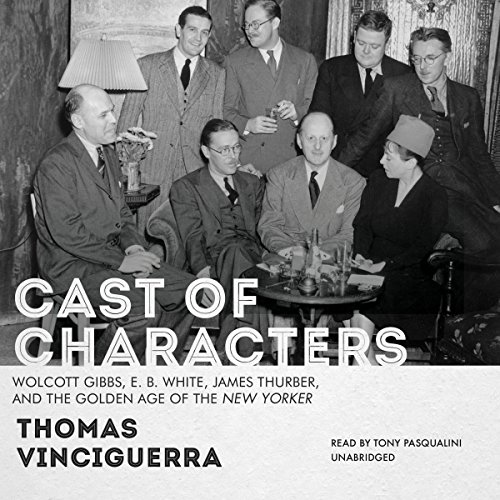 By: Thomas Vinciguerra
Narrated by: Tony Pasqualini
Try for $0.00

The professional and personal lives of the pioneers of an enduring magazine, The New Yorker.

From its birth in 1925 to the early days of the Cold War, The New Yorker slowly but surely took hold as the country's most prestigious, entertaining, and informative general-interest periodical. In Cast of Characters, Thomas Vinciguerra paints a portrait of the magazine's cadre of charming, wisecracking, driven, troubled, and brilliant writers and editors. He introduces us to Wolcott Gibbs, theater critic, all-around wit, and author of an infamous 1936 parody of Time magazine. We meet the demanding and eccentric founding editor, Harold Ross, who would routinely tell his underlings, "I'm firing you because you are not a genius" and who once mailed a pair of his underwear to Walter Winchell, who had accused him of preferring to go bare bottomed under his slacks.

Joining the cast are the mercurial, blind James Thurber, a brilliant cartoonist and wildly inventive fabulist; and the enigmatic E. B. White - an incomparable prose stylist and Ross' favorite son - who married The New Yorker's formidable fiction editor, Katharine Angell. Then there is the dashing St. Clair McKelway, who was married five times and claimed to have no fewer than 12 personalities but was nonetheless a superb reporter and managing editor alike. Many of these characters became legends in their own rights, but Vinciguerra also shows how, as a group, The New Yorker's inner circle brought forth a profound transformation in how life was perceived, interpreted, written about, and published in America.

Cast of Characters may be the most revealing - and entertaining - book yet about the unique personalities who built what Ross called not a magazine but a "movement".

What listeners say about Cast of Characters

Much than you ever wanted to know about the early years of the New Yorker, and especially more than you ever wanted to know about Wolcott Gibbs, who's largely forgotten all these years later. The high points are Ross, EB White and Thurber, always Thurber. And what little we get of Charles Addams. But so much Gibbs...and so little Parker, who barely appears. The book needs her...

If you look forward to your New Yorker every week, as, I do this is a must read. If you're interested in the cast and characters of the literary scene in New York through the two world wars, this is your book.