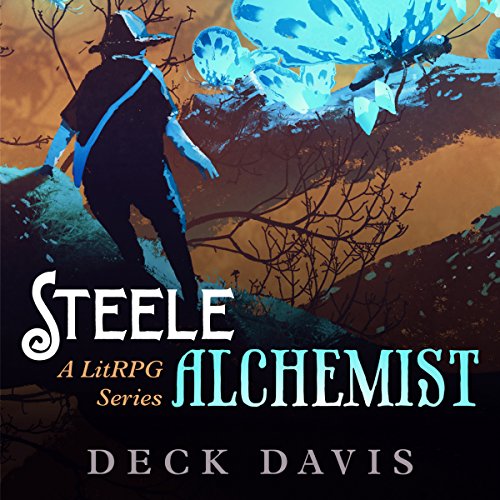 When bartender Jake Steele finds a portal in an abandoned building, he does what any bored guy would do - he walks through it. He finds himself in a game-like world where his life is measured in stats, and his violence is rewarded with experience points.

Under the tutelage of an animal-butchering, whore-loving master, he learns to become an alchemist. He used to mix drinks, but from now on, he's going to be mixing things that are far deadlier.

Over 400 pages of fantasy LitRPG adventure!

What listeners say about Steele Alchemist

I just reviewed Deck Davis's book, the Arcane Survivalist, and now I find myself doing the same for his other book. I wish I had read this book first, because I wouldn't have struggled so much to listen to the next one. Arcane Survivalist really left a bad taste in my mouth, and if I hadn't gotten these two books together I would have stopped after Survivalist.

This book has a few more story issues than Survivalist, but the narration saves it. If I had to place a wager, I'd put money down that this was Davis' first novel. You can see him making the effort, and he does steer his way through the choppy waters, but he has some holes in his boat when he is done. If this is a first effort, it isn't bad. Not great, but not bad. I guess after reading Blademage Beastmaster, I have higher expectations.

The problems I have here, aside from the story fluctuations is that this also becomes one long giant penis joke. Not funny ones at that. Also, the MC, Steele, is rude. I mean if someone in need of my help spoke to me like that they would go away empty handed. No one would ever just walk up to someone and start acting that way. Not unless they wanted socked in the jaw.

I will say this, which is funny, I hated the title Blademage Beastmaster, but enjoyed the book. I loved the titles Arcane Survivlalist and Steele Alchemist, but did not enjoy them so much. Again, Davis can come up with some catchy titles. And my issues with these books may just be that they weren't polished, but were overwhelmed by potty humor and unlikeable characters. I'd like to think he is improving.

With Alchemist I will say that Gisi almost manages to save the story. There is emotion and tension, and this is read as if it came from a person rather than a tree as in Arcane Survivalist. He manages to make this book bearable. At no point did I pray for it to end like I did Survivalist, and I didn't switch out to another book just to keep my head on straight, and I credit that to Kevin, whose narration was like some aloe vera on a sunburn.

I won't say stay away from this book, it does have some redeeming qualities, and the narration takes it a long way. You might enjoy it, I just hope the bathroom humor gets erased or severely curtailed from here on out, because it really isn't funny. Even though I did receive a promo code for this review it in no way influenced my considerations of the material, and in fact, inspired me to be more honest. In fact, getting a code generally makes me harsher as a reviewer as I am more often concerned what someone like Me will decide based on my review.

it sounded ok at first but as soon as he goes through the gate it goes downhill.
its all one dick or ball reference over and over.
if your going to make your charcters swear put some effort into it.
reader tried but he had nothing to work with

Not a great book but also not a bad book, if you have something better to listen to skip this for now but if you're low on options this is an ok choice.

germination of a story how not to do it

its a game lot you can say had Rick and morty with a taste of South Park thrown in. some people will love others will not.

the narrator did a good job from my point of view.

not my favorite but still interesting work from this author.

I almost quit listening early on because there is something about the narrator that I didn’t care for. But I got used to it after an hour or so.

Bows don’t shoot bolts. They can but it’s rare. Bolts are heavier and used with crossbows and ballista. Bows shoot arrows.

a good story, a bit to much cusing for my taste and bearly makes it on to the litrpg shelf.

This is a portal style book. But I do love me some portal stories. I thought this book had great progression and flow. I like the characters and found the dialogue natural and consistent with the characters.

More than another gimmick-driven LitRPG story.

We'll developed characters with actual character arcs. A real plot instead of a glued together series of DnD encounters. Good to listen to a LitRPG that isn't complete shite.

A fun and interesting take on the theme, absolutely worth a go and I hope more will follow