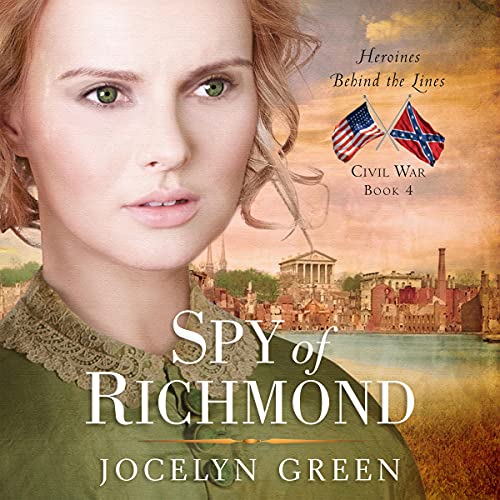 By: Jocelyn Green
Narrated by: Laura E. Richcreek
Try for $0.00

Trust none. Risk all.

Richmond, Virginia, 1863. Compelled to atone for the sins of her slaveholding father, Union loyalist Sophie Kent risks everything to help end the war from within the Confederate capital and abolish slavery forever. But she can't do it alone.

Former slave Bella Jamison sacrifices her freedom to come to Richmond, where her Union soldier husband is imprisoned, and her twin sister still lives in bondage in Sophie's home. Though it may cost them their lives, they work with Sophie to betray Rebel authorities. Harrison Caldwell, a Northern freelance journalist who escorts Bella to Richmond, infiltrates the War Department as a clerk-but is conscripted to defend the city's fortifications.

As Sophie's spy network grows, she walks a tightrope of deception, using her father's position as newspaper editor and a suitor's position in the ordnance bureau for the advantage of the Union. One misstep could land her in prison, or worse. Suspicion hounds her until she barely even trusts herself. When her espionage endangers the people she loves, she makes a life-and-death gamble.

Will she follow her convictions even though it costs her everything - and everyone - she holds dear?

What listeners say about Spy of Richmond