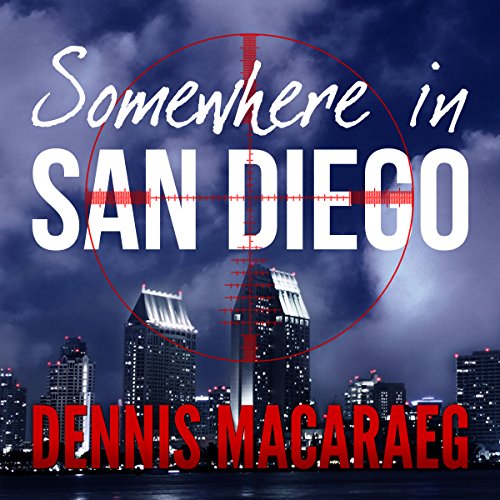 By: Dennis Macaraeg
Narrated by: Matthew Broadhead
Free with a 30-day trial

A thriller about best friends, scientific data, hired guns, and a harrowing race with a past lover to stay alive. Marine biologist Danny Maglaya must meet with his best friend and fellow scientist Blake Mason to upload the data demanded as ransom by the kidnappers of Blake's fiancée. The task might have been simple, but every time the two scientists try to rendezvous, two contract assassins show up.

With Danny and Blake's phones hacked and each move they make monitored, the only way to survive is to outwit the men wanting to eliminate them. With an ingenious but risky solution, Danny teams up with his ex-lover to piece together secrets that only she, Danny and Blake know. A series of perilous events follows as Danny and his old flame, Valerie, race through San Diego County, solving clues about Blake's whereabouts and about their possible future together.

Will their love for each other be the catalyst for success or will the bitter pain of their breakup be a recipe for disaster?

What listeners say about Somewhere in San Diego

I received a free copy of this audiobook from the author / narrator / publisher in exchange for an unbiased review.

I guess I was expecting espionage story but I got just another cat n mouse story. It wasn't boring, but it wasn't thrilling either. I listened to most of it without ever caring much about the characters. In fact, I tuned out multiple times and had to re-listen. In my opinion, the antagonists should've been fleshed out some more, giving us a solid villain to hate. Other than Danny, none of the other characters have meat on them. Pretty bland and one dimensional. The Valerie character is a waste and the romantic angle between Danny and Valerie doesn't add anything substantial to the story. I didn't feel entertained.

This was an enjoyable romantic suspense. The story was good but felt like it was missing something. Narration was perfect.

With plenty of thrills and non-stop action, this was an interesting listen. However, I would have preferred a buildup to the opening chase scene, instead of just diving right in. With armed assassins gunning for him and betrayals at every turn, Danny has his work cut out for him.

This story had a lot of potential but fell a little flat for me. It seemed a little disjointed at times and Blake and Danny going to the wrong places to meet up was a little annoying. Danny's relationship with Valerie didn't really add anything to the story for me. The plot was interesting and somewhat entertaining but seemed highly improbable. The narrator did a good job with the story and character voices.

A decent cat and mouse game of a book

This was a fairly fast paced book with a cat and mouse style that was entertaining. I'm not sure I cared for how the book opens with the main character already on the run. It made me fill like I missed a previous book or something. As this is a standalone book, that isn't the case. The author does try to &quot;flashback&quot; to who is after him and why, but I just didn't care for this tactic in a book. For an episode of a TV show, sure, but not for a book. Additionally, the only character that gets developed is the main character. All the others were undeveloped and shallow. The narrator was decent, and did a good job of trying to voice characters uniquely. All in all, it WAS entertaining, so that's good.

Life or death with time running out.

I felt as if I jumped into the middle of the story as it began. I had to check to see if this was perhaps a series. It's not. If you like chase and fight scenes, this is the book for you. That is about 85% of the book. I voluntarily reviewed this audio book after receiving an advanced copy.

I initially got this book because I've lived in San Diego and thought how cool it would be to see my former environs spoken about. The author did a great job detailing the San Diego neighborhoods and I seriously got a tickle when I knew exactly what/where he was talking about.

This story is billed as a thriller but I don't think it got to the 'thrill' for me. It was a good enough cat and mouse chase but there was not enough information about the bad guys, why they wanted the memory stick, or what was on it, to rise to thrill levels.

The narrator had a good voice and I took no issue with his delivery or character portrayal. I may have even appreciated his voice more if I liked the book better. I don't know; this book was just okay for me.

I really enjoyed listening to this book. Being familiar with San Diego area, I thought the imagery was great. I loved the suspense and action this book had. The story was well written and is a standalone listen. The narrator did a very good job with various characters, and added so many emotions. I requested a review copy audiobook and have voluntarily written this review. I would continue to listen to more books by both the author and narrator.

I was reading this book and honestly, the only word that I could think of was meh? It wasn't bad by any stretch of the imagination, and I was no never bored. However, I was also never enthralled. The plot was solid and very well thought out, again it was nothing new, but it did the thriller genre justice. Everything below will be a spoiler.


The opening scene shows the main character and his best friend on the run from &quot;goons&quot; and as the book progresses we find out more about who the goons are and why they're chasing Danny and Blake. We're also told that Blake's fiancee has been kidnapped before the book begins and there's a ticking clock for the two men, which builds in a level of urgency that first the thriller genre well.

What I didn't like: With the exception of Danny, none of the other characters were fleshed out. The villains were rather two dimensional and even his best friend Blake seemed to only serve the purpose of being his research partner/have some emotional tie to Elizabeth (the kidnapped woman) but even that emotional tie was weak because we never get to know either of them that well.

My least favorite part of the book was the relationship between Danny and Valerie. It seemed forced and really did not stir any emotion for me. The author kept bringing up Danny's deceased significant other, who was also Valerie's best friend and I just didn't feel anything. We kept being told Danny feels guilty and Valerie feels guilty/unappreciated but we never really saw how. There was also a sex scene that sort of came out of nowhere and then the epilogue they just magically/simultaneously received a message from the beyond telling them it's okay if they decide to be together. As it's written now, I thought the book would've been better without the romance.

So yeah, all in all I was entertained; I finished it in a day. It was a popcorn book