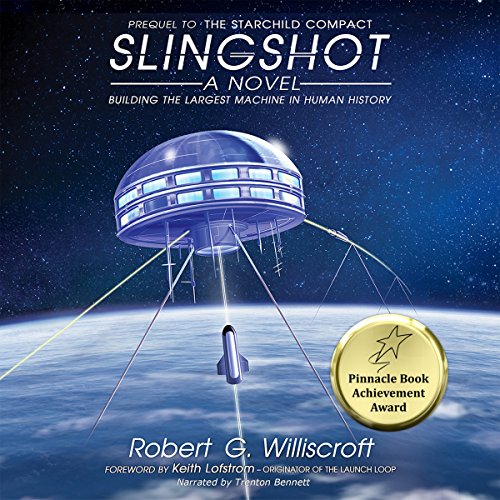 By: Robert G. Williscroft
Narrated by: Trenton Bennett
Try for $0.00

Slingshot is a love story - about a man, a woman, another man, another woman, some gender bending...and a machine, the largest ever built.

Slingshot is a mystery - about a missing aviatrix, a conspiracy, a true-believer. Slingshot is an adventure - about following a dream, the ocean-deep, outer space. Slingshot is about constructing the first space launch-loop, stretching 2,000 km between Baker and Jarvis Islands in the Equatorial Pacific. It's about high finance, intrigue, unlimited ambition, heroism, fanaticism, betrayal...and about opening space to the common person.

With a cast of 69, Slingshot takes you from Seattle's world financial district, to the ocean bottom at 5,000 meters off Baker Island, to the edge of space 80 km above. You play with dolphins and battle sharks. You fly and sail and dive, you work and play and love across the vast panorama of an equatorial Pacific being put to leash to serve humanity's surge into outer space.

While its accurate science and precise engineering will appeal to hard science fiction buffs, Slingshot's major focus is the grand journey, the opening of outer space to the common person by men and women who loom larger than life as they work, play, and love.

What listeners say about Slingshot

Apparently yet another series begins...

Edit
Edit
Edit
There is a great deal of redundancy and verbiage that I feel clutters up the story.

Already accessing. Fire on the Flight Deck! Just a break from space!

Man, he nailed it. Not perfect, but some of the voices he gave to characters, in particular the females, was VERY impressive. TB is a clearly and up and coming Audible talent!

Was Slingshot worth the listening time?

I was provided this audio book by the author in exchange to this unbiased review.

That said, this book definitely "grows" on you. I enjoyed it more than I thought I would, and for all it's sprawling and conceptual flaws, it sniffs around the start of a rather interesting series.

Recommended with those reservations.

This was an interesting book and I enjoyed listening to it. The details were well written and the narration was great. Although I'm not usually a sci-fi reader I got into this and I would recommend this book to anyone. I hope there is a 'The Starchild Series, Book 2'.This audiobook was provided by the author, narrator, or publisher at no cost in exchange for an unbiased review.

The story felt clunky at times, with so much time spent on little details that the story gets lost. Better editing would have been nice. The story was awesome however. Unique and fun I loved it.

Great performance by the narrator. Loved it.

Slingshot: The Starchild Series written by Robert Williscroft is a multi-faceted book.  It will appeal to science fiction, romance, adventure and conspiracy enthusiasts alike.

This is a story about one man’s dream to build a launch loop that can send anyone and everyone to outer space affordably and eco-friendly.  The building of the launch loop is amazingly detailed and the building of the sky tower is an action packed adventure.  Each step of the book from the idea to the design to the building is realistic and made more so by Williscroft’s detailed descriptions.

Furthermore, Williscroft brings in all the people involved – the divers, the Mohawk high iron workers, the misguided environmentalists, machinists, dolphins, construction workers, hi-financers and more.  He shows you small slices of their lives – what they do, how they love, where they come from and that they all share a common dream.  The story talks about the doers and the behind the scene people who make everything happen but who are nothing more than mere shadows.  Williscroft allows these people to shine in this book – they are the heroes.

Williscroft brought this idea to life through his attention to detail, his descriptive and precise wordsmithing.  His story flows smoothly albeit very detailed.  He develops his characters with great care and a fullness that leaves the listener connected to the story line and characters.  Williscroft immerses his listener fully into the story and keeps them there throughout.

Several twists at the end will leave the reader gasping and stunned; it is a story that should not be missed by anyone who enjoys science fiction and space travel!

Williscroft’s attention to detail, at times, became a bit overwhelming but I would say it was necessary to make it realistic.  This is an epic audiobook of 13 hours but I found myself having a hard time shutting it off.  My attention was being focused and held firmly enabling me to visualize the launch loop and experience the adventure and the emotional toil the ending takes.

The narrator, Trenton Benton performs the audiobook very well.  He is talented in the different characters he portrays.  I found his performance enjoyable and pleasant.  My only dislike was a good portion of his female voices which were too high-pitched making them sound unprofessional and too young.  However, I thought he did a great job.

There were no issues with the audio production of this audiobook.  Everything was clear and concise.

Very engaging story of a believable future vision. The action was interesting, and he did a great job describing the events and their sequence. Reading about the setting made for a mini vacation, with the sun and sea. Good suspense! It would be nice to see something like this come to life! Likable characters, including the dolphins. Loved that he has woman characters in senior positions. However, their characters were undermined by calling each other "girl" and hugging and kissing strangers, which usually doesn't happen in professional settings. Looking forward to the next book in the series.

This had such a cool concept! Let's make space travel affordable for everybody! And it did not disappoint. It was incredibly detailed, but not boring, and everybody who was involved in creating the launch loop was brought in. It felt pretty awesome because most authors tend to ignore the backstage / behind the scenes people, so it felt refreshing to read / listen to that. Williscroft had written a truly amazing book.

Do NOT waste your money

I did not get far into this book before wanting to figuratively throw it across the room, and I've only felt that way about one other book in my nearly 60 years.

The men are barely described, but they are from every part of the planet. Only one per location so as to artificially diversify the cast as much as possible. Every one of them is more or less a stereotype.

The few women are all tall, "lithe" (the author LOVES this word) and model-gorgeous.

The author spends much time proving that he understands technical subjects, e.g. scuba diving. The text practically screams "LOOK AT ME I KNOW ALL ABOUT DIVING!!"

I just couldn't face any more. Out of the >1000 Audible titles I've purchased, this is the only one I wanted to return, but alas I bought it over a year ago.

Your average college freshman could out-write this person.

The writer spouts the disproven republican conspiracy theories. The writer also over-glorified fox news. Any reader should be made aware of this and take what the writer says with a grain of salt. Some are outright lies.

The main story line of this book is interesting and the narration is good. But, there is so much detail and historic trivia added that it listens like a power point presentation. There are snipits of sexual interaction thrown in here and there that just don't work in the story. If I hadn't agreed to do a review, I would have stopped listening after the first chapter.

Didn't finish it. The chavinism choked me to a halt even though the plot was a good one. Shame as it had potential to be fun. Wasted my time waiting for it to grow up.