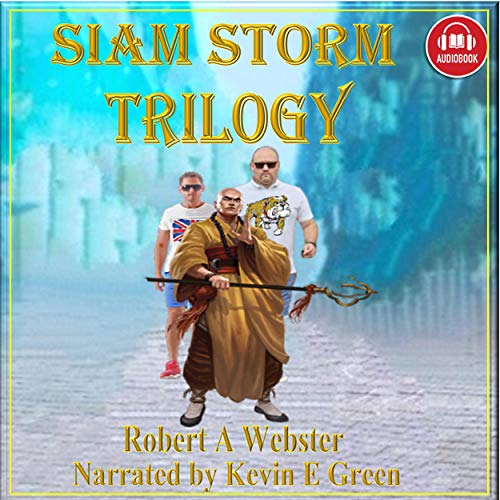 By: Robert A Webster
Narrated by: Kevin E Green
Try for $0.00

Giggling like naughty schools kids each time they talk about their upcoming holiday to Thailand, Spock and Stu hope it entails plenty of booze, parties, raunchy sex with acorn-color-skinned beauties, and balmy days "chillaxing" while drinking cocktails on warm sandy beaches.... Boy, are they in for a shock!

When a golden box containing the dental remains of the Buddha is stolen and its warrior monks murdered, the Elders send the surviving warrior monk to retrieve the holy relic. The search takes the monk from his isolated Thai monastery in the Cardamom jungle to Cambodia. After discovering that the man responsible has fled to Thailand, he sets off in pursuit. Little does he realize that he is about to run into Stu, Spock, and their new pal, Nick - who is not only thrifty, but also accident-prone. The fun has just begun....

"Once you pick up this hilarious adventure and start reading it, you won’t be able to put it down." - Dinorah Blackman

With soothing music playing in the background, Professor Norman Rumble clasps his hand over his mouth and looks wide-eyed down at his creation glaring back at him. Mystified, there is only one question on his lips.... Why?

There are only two people in the world who know the answer to that... and they’re fishing.

Hold on tight while Chalice transports you to Cambodia with its spectacular temples, sun-drenched beaches, and lush tropical islands. In Chalice, the second part of the Siam Storm adventures, our lovable English rogues are back, causing more mayhem around the mystical orient.

Pon, the mad monk, now has a bad mullet; Nick, Mr. Calamity, finds out what the view is like up a cow's "botty", and Spock and Stu... go fishing. From Cleethorpes to Cambodia, with adventures in between.

Who in their right mind would kidnap the daughter of a high-ranking Vietnamese National Assembly member and a mad monk’s wife?

A kidnap and ransom demand lead our hapless heroes into a pursuit through Vietnam. They encounter an old foe, compelled by obsession in his revenge-driven quest. This time they face many challenges in both their adventure and their personal circumstance, and even though forced to drink fruit-based concoctions and warm beer, they never lose hope.

Find out what mayhem English lads can cause when fumbling through Southeast Asia.

This isn't just a book, it's an adventure! The characters are irreverent, politically incorrect in every way, and in some cases, basically insane. They're also hilarious and end up in ridiculous situations. If you don't mind idiotic but mostly likeable men, topless women, body odor, farting, and other potentially offensive things; and you love old school British comedy and slapstick humor, mixed in with serious topics like murder and betrayal (at times it felt as if separate books had been shuffled together, giving a heartbreaking chapter followed by crazy humor), I can recommend this long and winding tome. It's really quite impressive, and the narration is fantastic.