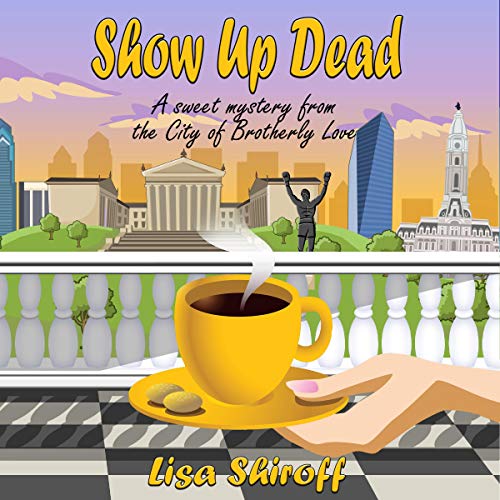 Show Up Dead: A Sweet Murder from the City of Brotherly Love

By: Lisa Shiroff
Narrated by: Jamie Soltis
Try for $0.00

Self-described lifestyle manager, Peri Milano, has everything under control. With the organizational skills of a data processing program, the discretion of the CIA, and the creativity of an Ikea research and design engineer, she is the go-to for whatever whim her customers fancied to have fulfilled, and whatever method they needed for their madness.

So when Mr. Wooley asked her to plan a coming-out party with a funeral theme to say farewell to his "old" self, Peri has it under control. When he actually shows up dead, she's still got it under control.

But as the murder investigation swirls around her and another client begins receiving threatening letters, her grip on the world starts to loosen. And when her son winds up in the hospital, her cousin winds up on the missing person's list, and she winds up being responsible for an orphaned, adult soap-star wannabe, Peri's not sure she wants to be in control of anything ever again.

But someone needs to figure it all out. And since she's so good at it, what other choice does she have but to save everyone in her little corner of the world?

Hopefully she'll have time to save herself.

What listeners say about Show Up Dead: A Sweet Murder from the City of Brotherly Love

5 Star Fun: Murder, Mystery and a bit of Mayhem!

Peri Milano is one of those crazy people who loves to organise the lives of others, and as a "lifestyle manager" for hire, she gets paid for it.
This story is about Peri's wild adventures when her latest organised event goes wrong-dead wrong! We are introduced to our heroine as she emerges from a state of unconsciousness only to be faced with a host of cops investigating a murder, and one of the cops happens to be quite a looker too!
Chock full of great characters such as Peri's strange mother and the awful, over the top self centred Jacqueline, this is a really entertaining listen. It's fast paced, a good story and really, really funny, so good and so funny that I'm really hoping we will be treated to many more Peri stories - soon!
Narrator
Narrated by Jamie Soltis, and what a cracking job she did, I thought she captured the character of Peri exactly right, oh and her Jacqueline is hilarious, it's not always easy to pull off humour, but she nailed it.
Jamie energised the story perfectly, her narration has a good pace and rythym and her voice is easy to listen to. This was an excellent choice of narrator.