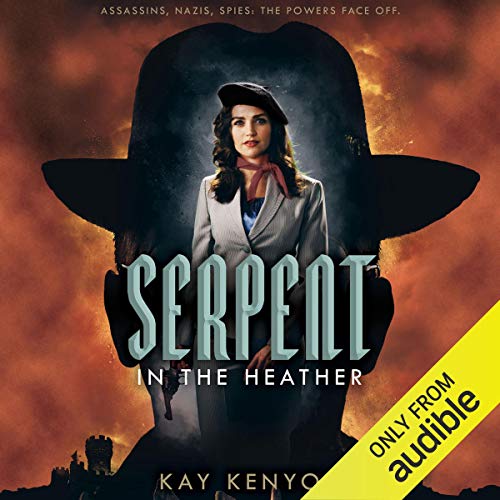 Serpent in the Heather

By: Kay Kenyon
Narrated by: Nicola Barber
Try for $0.00

Now officially working for the Secret Intelligence Service, Kim Tavistock is back to solve another mystery - this time a serial killer with deep Nazi ties - in the sequel to At the Table of Wolves.

Summer, 1936. In England, an assassin is loose. Someone is killing young people who possess Talents. As terror overtakes Britain, Kim Tavistock, now officially employed by England's Secret Intelligence Service, is sent on her first mission: to the remote Sulcliffe Castle in Wales, to use her cover as a journalist to infiltrate a spiritualist cult that may have ties to the murders. Meanwhile, Kim's father, trained spy Julian Tavistock, runs his own parallel investigation - and discovers the terrifying Nazi plot behind the serial killings.

Cut off from civilization, Sulcliffe Castle is perched on a forbidding headland above a circle of standing stones visible only at low tide. There, Kim shadows a ruthless baroness and her enigmatic son, plying her skills of deception and hearing the truths people most wish to hide. But as her cover disguise unravels, Kim learns that the serial killer is closing in on a person she has grown to love. Now, Kim must race against the clock not just to prevent the final ritual killing - but to turn the tide of the looming war.

What listeners say about Serpent in the Heather

Yes. Very well written. Couldn't wait to listen to it each day.

The characters come alive and their "dark talents" make them irresistible.

Have you listened to any of Nicola Barber’s other performances before? How does this one compare?

No, but she is great and the perfect match for this book.

Some of my favorite moments are when a character's "talent" is being revealed to the reader. Kay Kenyon does a great job of showing us these talents as if they actually exist. Such a fine line between fantasy and reality in these books.

If you haven't read/listened to Book 1, At The Table of Wolves, yet, get that one too! Can't wait for Book 3!