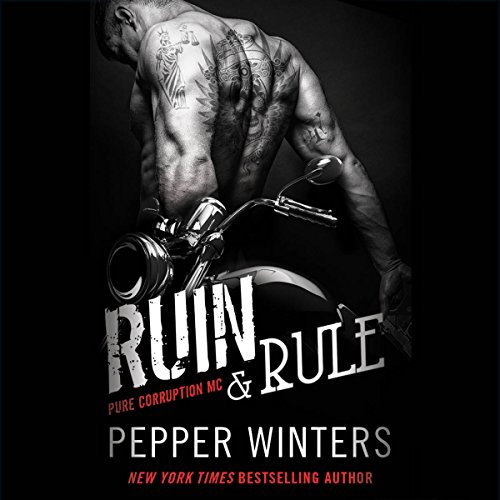 By: Pepper Winters
Narrated by: Kelsi Nesser
Try for $0.00

'We met in a nightmare. The in-between world where time had no power over reason. We fell in love. We fell hard. But then we woke up. And it was over....'

She is a woman divided. Her past, present, and future are as twisted as the lies she's lived for the past eight years. Desperate to get the truth, she must turn to the one man who may also be her greatest enemy.

He is the president of Pure Corruption MC. A heartless biker and retribution deliverer. He accepts no rules, obeys no one, and lives only to reap revenge on those who wronged him. And now he has stolen her, body and soul. Can a woman plagued by mystery fall in love with the man who refuses to face the truth? And can a man drenched in darkness forgo his quest for vengeance - and finally find redemption?

Pepper Winters is a New York Times and USA Today international best-selling author. She loves dark romance and star-crossed lovers as well as the forbidden and taboo. On a personal note, she loves to travel, has an addiction to crème brûlée, and is married to an incredible Canadian who puts up with her endless work hours and accompanies her on signings. She's also a firm believer that the impossible can become possible.

"This is Pepper at her finest combining a badass hero to die for, a feisty determined heroine and a plot so layered in complexity it will make your head spin." (Becs Glass, Sinfully Sexy Book Reviews)

What listeners say about Ruin & Rule

I wish this series was turned into a Tv show or movie. You feel like you are in the books I absolutely love it.

Absolutely loved it. Will definitely be re-visiting this series. I adore all Pepper Winters books.

I returned a pepper winters book some time ago but this one sounded more to my liking. there are a few flaws in here which frustrated me no end.
I don't think it's giving anything away if I mention them. 1. how did they get into the house when he has everything imaginable secured? 2. why doesn't the heroine tell him some of what she comes to know? it's an obvious choice to get what she needs but Ms Winters doesn't write it that way, which in turn draws out the story. 3. over and over the heroine keeps saying she's had enough time to get to the bottom of it all.....!!! it never happens.
I mention these suttle points because the writing is so deep and descriptive that I found it frustrating that these easy things were overlooked.
the first half of the book frustrated me as it was past and present thrown everywhere by both hero and heroine and the answers and understanding took foooorreeeever. the 2nd half picked up pace. the major problem I have is the single narrator. even there is the accent change for the heroine, when she narrates the male voice, past and present, It got confusin and and i had to go back to listen again.
the tone is not different enough and makes for a lot more concentration than just keeping up with the authors descriptive and slowly unravelling plot.
the baddies seem to have been revealed at the end...I'm guessing there is more twists coming as the 2nd book is still hours long.
I'm almost passing...mainly due to single narration. such a pity. Aiden Snow would have been brilliant as kill.
2nd book...still deciding......

Just not for me

I’m sure others will love this book. I had read and listened to other books by this author and enjoyed them. However this performance and storyline just wasn’t for me.

What a great story, so much angst, heartache and let's no forget terror! I was caught in Pepper Winters writing from the beginning of this story so I'm going to keep this short as I have to dive into the next story in this series, so I loved this story nothing more to be said!