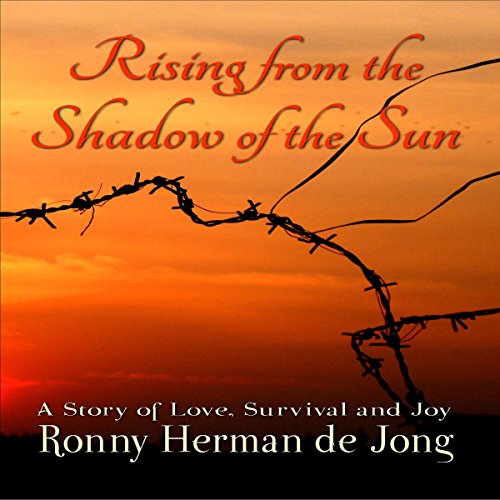 Rising from the Shadow of the Sun

Rising from the Shadow of the Sun: A Story of Love, Survival and Joy exemplifies the power of positive thinking, of hope, of perseverance even in the most perilous and life-threatening situations and of a mother's love for her children, surpassing even the tragedy of death.

Jeannette Herman-Louwerse ("Netty"), a young mother incarcerated by the Japanese on the island of Java during World War Two with her two little girls, Ronny and Paula, endures starvation, harsh punishments, and diseases for almost four years. They barely survive.

In a secret diary, risking torture and death had it been detected, Netty writes letters to her parents in the German-occupied Netherlands, and gives an accurate historical account of the Japanese invasion and the lives of women and children interned under the brutal regime of the Japanese. She describes the years of physical and psychological suffering, but also the hope, faith, solidarity, and resilience that keep the imprisoned women alive.

Netty's husband Fokko, a pilot with the Dutch Naval Air Force, stationed in Surabaya, escapes with his squadron hours before the Japanese submarines encircle the island. Working under British command in Sri Lanka, Fokko’s story is chronicled along the same timeline as that of his wife and children; he, too, survives.

Ronny Herman de Jong, born and raised in the Dutch East Indies, survived four years in Japanese concentration camps during WWII. After the war Ronny studied English at Leyden University in the Netherlands. In 1972 she moved to the USA with her husband and three children and currently resides in Arizona.

"This fascinating chronicle of a Dutch mother and daughter records and agonizing, but eventually triumphant, journey from the horrors of life in a WWII Japanese prison camp in the 1940s to peace and prosperity in the United States in the 21st century." (Ed Williams, PhD)

What listeners say about Rising from the Shadow of the Sun

Touching memoir of a horrific time

I enjoyed learning about her family's experience before, during, and after the war. As an Indo, my father was outside of the camps and my grandfather was a POW, so learning about the experience in the family camps was very interesting and equally sad. My only wish for the audio was that the narrator was Dutch or someone better able to pronounce Dutch words. For me, but probably not for others, it lost a bit of its authenticity due to the American accent.

This was a moving account of one woman's time in a concentration camp, as well as her life afterward. I was deeply touched by both the writing and the narration, and I have to say that the many accents and languages were handled beautifully by the narrator. While I felt there could have been some editing of the author's recounting of her time in Hawaii, overall I found this audiobook to be very worth my time, and I highly recommend it other other listeners.