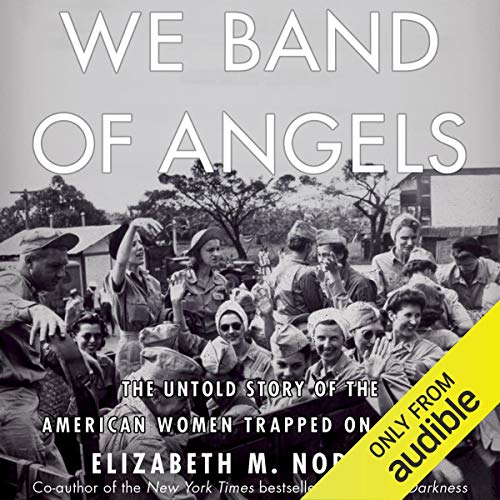 We Band of Angels

By: Elizabeth M. Norman
Narrated by: Dina Pearlman
Try for $0.00

We Band of Angels is the story of women searching for adventure, caught up in the drama and danger of war. On the same day the Japanese Imperial Navy launched its surprise attack on Pearl Harbor in Hawaii, it also struck American bases in the Far East, chief among them the Philippines. That raid led to the first major land battle for America in World War II and, in the end, to the largest defeat and surrender of American forces. Caught up in all of this were 99 Army and Navy nurses - the first unit of American women ever sent into the middle of a battle. The "Angels of Bataan and Corregidor" - as the newspapers called them - became the only group of American women captured and imprisoned by an enemy. And the story of their trials on a bloody battlefield, their desperate flight to avoid capture and their ultimate surrender, imprisonment, liberation and homecoming is a story of endurance, professionalism and raw pluck. Along the way, they helped build and staff hospitals in the middle of a malaria-infested jungle on the peninsula of Bataan. Then, short of supplies and medicine, they worked around the clock in the operating rooms and open-air wards, dealing with gaping wounds and gangrenous limbs, ministering to the wounded, the sick, the dying. A few fell in love, only to lose their men to the enemy. Finally, on the tiny island of Corregidor in Manila Bay, the Japanese took them prisoner. For three long years in an internment camp - years marked by loneliness and starvation - they kept to their mission and stuck together. In the end, it was this loyalty, this sense of purpose, womanhood and honor, that both challenged and saved them.

Through interviews with survivors and through unpublished letters, diaries, and journals, Elizabeth M. Norman vividly re-creates that time, telling the story in richly drawn portraits and in a dramatic narrative delivered in the voices of the women who were there.

What listeners say about We Band of Angels

I'm 62 and retired from the Air Force. In the 70's I spent a total of 3 years at Clark AB. This book moved me to tears several times as my mind related to the past. Every year in New Mexico there is an event called The Bataan Memorial Death March. A 26 mile march that I have participated in the past 5 years. This year at mile 16, I suffered a heart attack. My life was saved by 6 Army nurses who were a few steps behind me. As my eyes well up, I cannot help but think of the correlation between my angels and the Angels of Bataan..

I have read this book several times and would recommend it for all Americans! It is a must read/listen. You don't have to be interested in World War II to savor this book. This is an amazing tale of nurses who thought they were traveling to paradise and ended up in a horrific war zone,and eventually, as prisoners of the Japanese in the Philippines.

What was one of the most memorable moments of We Band of Angels?

The stories of the nurses surviving as prisoners of war when they were completely unprepared to be in a combat zone are so inspiring.

This book is so interesting and reveals so much about the "angels" who are the heroines of this story.

Seldom told stories of Army & Navy nurses in the Phillipines shows the true character of courage. Well researced and told

If you could sum up We Band of Angels in three words, what would they be?

One of the most inspiring stories I have ever had the pleasure to hear. These nurses showed incredible ingenuity, perseverance, and courage along with hard and difficult work to save others before themselves.

What other book might you compare We Band of Angels to and why?

I would compare this story to Band of Brothers on steroids but this story was about women and many, many more of them.

Have you listened to any of Dina Pearlman’s other performances before? How does this one compare?

Many moments moved me. The whole book was great.

I am giving this book to my daughters and nieces to read for inspiration.
They may face different challenges but the spirit and lessons are the same.

a wonderful book !
this should be Tom Hanks and Steven Spielberg's next hob series!!!

I loved this book. It told the forgotten history of the nurses of Bataan. We really forget that their were women POW's in WWII. I loved the first hand accounts of the nurses time in captivity. It was well written and performed. AUDIBLE 20 REVIEW SWEEPSTAKES ENTRY

Honor to these Angels

I have so enjoyed listening to this account of the heroism these women exhibited in the early days of WWII. May they forever rest in the peace they so richly deserve. May God bless and keep them.

What disappointed you about We Band of Angels?

The narrator consistanly mispronounced words. It wasn't one or two unusual words but consistant words she either should have known or researched.

What was most disappointing about Elizabeth M. Norman’s story?

She repeated a story of an event, with different facts. Also, some of her other facts were questionable.

Would you be willing to try another one of Dina Pearlman’s performances?

This was a very disappointing story about an extremely important period in American history.

Great history about these heroic women

Loved the history and information about these heroic women. I knew there were female nurses in the war but never knew this happened. Only challenge was the narrator seemed to be always running out of breath, otherwise great book!

This is a very interesting book. I highly recommend everyone read this book ! The WW2 nurses went through beyond difficult conditions and circumstances. May they All be remembered.