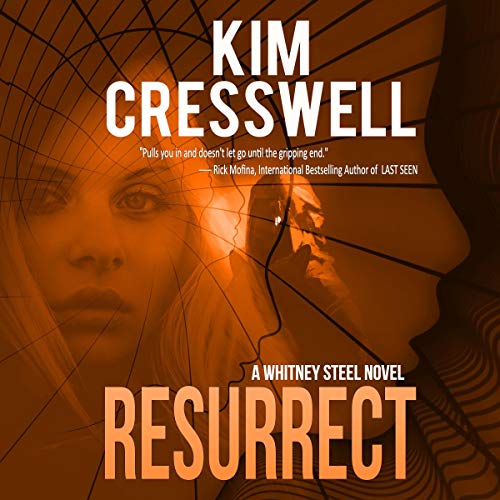 By: Kim Cresswell
Narrated by: Rebecca Hansen
Try for $0.00

Whitney Steel is back in the third audiobook of the action-packed series!

After two prominent scientists working at privately owned BSL-4 labs in Nevada and Texas are found murdered, no one makes the connection until investigative reporter Whitney Steel receives information about a possible biological attack using a new chimera virus known as "Resurrect". But when Whitney begins to unravel the truth as to who is behind the threat, enemies far and near surface, and a shocking discovery into the past could change her life forever in a race against the clock.

Resurrect is a pulse-thumping romantic thriller about an infectious outbreak in the tradition of Robin Cook and John J. Nance

"A swiftly-paced page-turner that pulls you in and doesn't let go until the gripping end." - Rick Mofina, international best-selling author of Last Seen

What listeners say about Resurrect

Kim Cresswell writes a gripping medical story in the vein of Robin Cook and Alex Kava, which I love. I was pulled into this book from the very beginning. I loved all of the twists in this book. It is my first by this author and part of a series. Without giving away spoilers, I loved the action, the karma, the ending and some of the characters. Rebecca Hansen did an awesome performance adding to the suspense, the emotions, and giving distinguished voices for the characters. This book was very well written and could have been pulled from headlines. I hope that the chimera virus does not exist, but I could definitely see it being used by terrorists to manipulate nations.

Whitney is back with the team, and Nathan has found a way to make trouble for her, Blake and Angel. He is not only directly making trouble for the three of them it seems he has also now decided he wants to own a super bug that will kill people fast then linger and kill more for a while after. A hybrid type super bug, a chimera. It is up to Whitney and the team to stop him, will it be for good this time, because Nathan is like the proverbial bad penny, he keeps coming back no matter what.

This is the non-stop action and suspense world of Whitney Steel, and she is so awesome and cool when I grow up I want to be her. I love the characters they are so well rounded and work well together, even Nathan because you have to have a character to hate. This is a book you won't want to put down or if you have the audio like me you won't want to stop listening, because narrator Rebecca Hansen makes the world of Whitney Steel come alive and you part of the team.

I am so hooked on this series that I binge-listened to all 3 books and am eagerly anticipating the release of book 4...no pressure Ms. Author! In this story, Whitney and Blake are about to finalize adoption of the clone girl, Angel, that was created by the mad scientist, Nathan Shaw. They're eager to be a family, officially, and Nathan Shaw is on death row...life is great! Yea, except that two dead scientists have been discovered and it appears that someone is resurrecting a derivative of the deadly small pox virus. As if that's not scary enough, Shaw's appeal has been approved and he is out of prison until a retrial. The race is on to find the source of as well as prevent the spread of the virus. Will Whitney and Blake figure it out in time or will Shaw distract them with the demand to meet Angel? Yet another fast paced thriller in the series, that keeps your heart rate up! No spoilers except to say that Shaw finally gets his comeuppance...yay! Now anxiously awaiting book 4!
I voluntarily accepted a complimentary copy of this book in exchange for an unbiased review.

This is the first book of this series I’ve read but I didn’t feel lost. The back-story is given as needed to allow for an understanding read for new readers of Whitney Steel. The story was written excellently allowing for a smooth and entertaining read. It did take a bit to become truly intrigued with the story but once I did, it was hard to stop listening. The narration was great except for some of the emphasis being off and the volume was uneven! Overall I rate it with 4 huge stars.