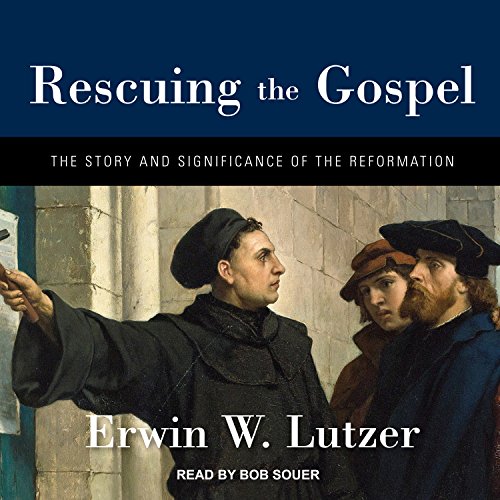 The Reformation unfolded in the cathedrals and town squares of Europe - in Wittenberg, Worms, Rome, Geneva, and Zurich - and it is a stirring story of courage and cowardice, of betrayal and faith. The story begins with the Catholic Church and its desperate need for reform. The dramatic events that followed are traced from John Wycliffe in England, to the burning of John Hus at the stake in Prague, to the rampant sale of indulgences in the cities and towns of Germany, to Martin Luther nailing the 95 Theses to the door of the Castle Church in 1517, to John Calvin's reform of Geneva. Erwin W. Lutzer captures the people, places, and big ideas that fueled the Reformation and explains its lasting influence on the church and Western civilization.

What listeners say about Rescuing the Gospel

Although I was brought up as a catholic, I never was taught about the Refomation. Now that I understand it, I am glad that I converted to become a Protestant. Great read!

This is a great story of the reformation!

This is a great story of the reformation, beginning with Tyndale, continues through Luther, Zwimgli, Calvin, through the anabaptists and ends with what it means for today. I truly recommend this for anyone wanting to observe Christ protecting and building His church through His chosen instruments (men equipped/empowered by the Holy Spirit). He WILL preserve His gospel!

Good summary of the reformation.

Enjoyed this quick easy listening summary of the reformation. It still has repercussions to this day.

Enlightenment that was presented with passion.

The simplicity of the difficult discussion made this very enjoyable. the Author spoke with authority and understanding.

New to the Christian faith?

A helpful way to get caught up on some modern history. Give it a read, then seach for why not (truly).

A reminder that the reformation is still ongoing

A wonderful book that succinctly summarises the reformation and the sacrifices of those who boldly stood against the church and state. Not only does it look 500 years into the past, but it also examines the current situation between the prodestant and catholic movements. More than that, it clearly outlines why the Gospel is central to the differences that still exist and why Christ alone is our salvation.