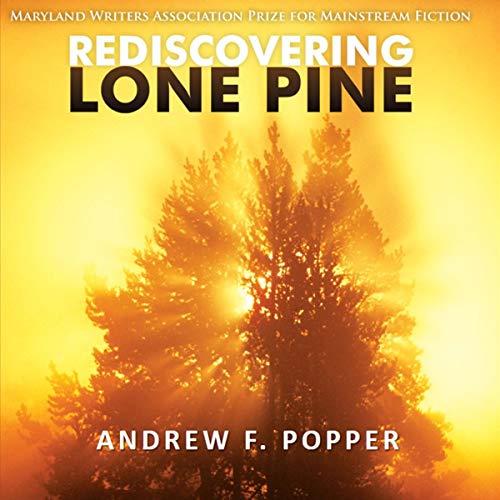 "Behind my house were 20,000 acres of woods. This was my ocean of great trees and saplings, fast streams and small lakes, ancient stone walls and tiring hills." From this opening, the stage is set for Grant Harper to go on the adventure of a lifetime, a secret trek with Jason Talbot that will change their lives forever. The quest takes them across an ice-covered forest and just when it seems they have acquired the holy grail, the location of Lone Pine, things go terribly wrong.

Jason, the slightly older guide of this ill-fated trek, simply vanishes leaving Grant many miles from home and lost. His strength and perseverance become evident as he makes his way back, but those attributes prove insufficient to face unrelenting inquiries that cover the next two decades. From this hike, through his teenage years, and well into adulthood, Grant is plagued by this disappearance, investigated, suspected, and haunted by something evident and inexplicable.

Hannah and Mickey, Grant’s best and at times only friends, join him in a search that takes them well into adulthood. The ordinary challenges of life are magnified by their times; it is now 1969. Vietnam and the draft lottery paint an uncertain future, and Hannah, normally the anchor in the group, finds herself in conflicted relationships with both. By 4:00 am on the night of the lottery, Mickey knows he is headed to serve his country, to Vietnam, and Grant not - and everything changes.

What follows is an extraordinary tale of being lost and then found, of perseverance, an insatiable quest moving from a steamy courthouse in Albany, Mickey’s life now in the hands of Grant and Hannah, and back to that same forest.

Be prepared to explore one of the classic disappearance mysteries of our time. This winner of the Maryland Writer’s Association award will render you a spectator of love, unforgettable friendships, acts of courage, and obsessions that blind the best and worst among us.

“I'm not sure I have ever listened to two better audio books with such universal appeal. When you nail character, plot, and narration, it’s the trifecta of this medium - these are the new gold standard. We all need a diversion that quietly becomes inspiration - and we all need a smile. Rediscovering Lone Pine and Sunrise at the American Market (my candidates in the great American pantheon) will do that for you and more. Each has a gentle start - but then, almost without seeing it coming, you become invested, more than curious, anxious to see what will happen, and - well, I won’t spoil it. Let’s just say I truly loved these audio books.“ (A.L. Harris, Professor of English and university administrator)

I have just recently started listening to audio books during my commute to work. I have discovered that with either a poor narrator or poor story line its hard to focus and keep my attention. Rediscovering Lone Pine by Andrew Popper was a very entertaining listen and the narrator did a great job.

This book kept me engaged all along to the point that I would just sit in the car at the end of my daily trip in order to listen to some more chapters.

Andrew Popper has created quite a yarn, and Tim Gerard Reynolds has relayed this story with a certain poignancy that kept me intrigued from the beginning to the last page. The initial event, a childhood friend disappearing on a hike when the protagonist is 10 begins the haunting drama which he can never let go. He and his friends grow up, evolve, and the sub stories help build the suspense. No spoiler here, it was therapy to listen to this book, and the ending was not even close to my expectations. It merited the Maryland Writer’s Assoc. Prize for Mainstream fiction.