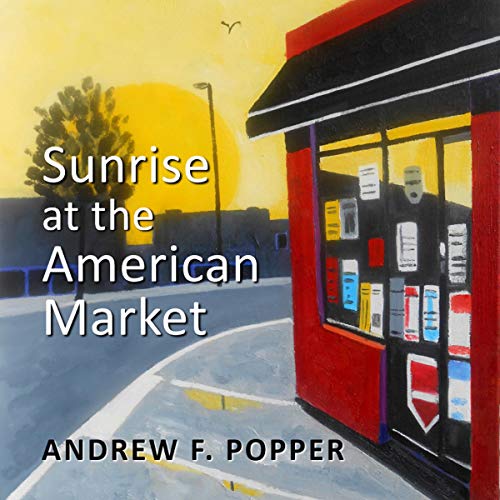 Sunrise at the American Market

Six years ago, a group of complete strangers began gathering each morning for coffee in a convenience store, The American Market, on the outskirts of Washington, DC, and a community was born. Their story is chronicled by Charlie Pratt, son of a wealthy New England family. After a legal education that left him marginally disinterested in law, Charlie moved to Washington where he lived a comfortable and solitary life until he (and his fat and affable Black Lab, Flynn) became a central player in the morning group at the Market.

The bonds between members of the group began to solidify when Henry, the proprietor, removed the entire rack of goods in the front of the store replacing them with a table and folding chairs. It was Henry who organized the group and turned his otherwise predictable convenience store into a salon where all topics, serious and inane, were on the table.

In time, the Market became that safe place we all seek where Charlie, Henry, Simone, Maurice, Alex, and Claire could simply be, freed of judgment, liberated from externally imposed identities. In that extraordinary setting, things began to happen, crystalizing in a passionate, potent, and disjointed relationship between Charlie and Claire beginning when they attend a fabulous, confrontational, and unforgettable New England wedding between Jennifer Strong and Samantha Ecktington.

Each of the characters seated around the table face challenges with money, relationships, the nature and shape of their community, and overshadowing all, an encroaching, insurmountable medical crisis.

Questions of fidelity, fate, a murder investigation pushing Charlie to get over his reluctant lawyer status, and compassionate life termination become transformative, particularly for Charlie, as they become that best of all families, a family of choice. Prepare to get to meet six remarkable and complex characters who are at once quite unique, and, if one has the courage to observe, just like us.

“I’m not sure I have ever listened to two better audio books with such universal appeal. When you nail character, plot, and narration, it’s the trifecta of this medium - these are the new gold standard. We all need a diversion that quietly becomes inspiration - and we all need a smile. Rediscovering Lone Pine and Sunrise at the American Market (my candidates in the great American pantheon) will do that for you and more. Each has a gentle start - but then, almost without seeing it coming, you become invested, more than curious, anxious to see what will happen, and - well, I won’t spoil it. Let’s just say I truly loved these audio books.“ (A.L. Harris, Professor of English and university administrator)

“At the heart of Sunrise at the American Market is a deeply moving, beautifully-observed meditation on the role of friendship and community in our lives. In this novel brimming with life and humanity, Popper explores by some of the more vexing challenges we confront, from compassionate life termination to same-sex marriage.” (Janie Chuang, Professor, author, and former adviser to the UN Office of the High Commissioner for Human Rights)

“Once in a great while a book bewitches so thoroughly that its later recollection comes as though I had been in the book. Usually books that have this effect are vivid epics or sweeping historical narratives. Rarely, a quieter story will carry this same wondrous and disorienting whisper of a lived experience. Anne Tyler’s work sometimes does, and Richard Ford’s - and so does this remarkable novel of time, friendship, and place.” (Marianne Wesson, Professor of Law Emeritus and author)

“This unusually personal tale of transformation will charm you, trouble you, and make you laugh. By the time you’re done, you’ll have a group of friends you’ll never forget.” (Rangeley Wallace, Clinical Professor and author)

What listeners say about Sunrise at the American Market

A wordsmith goes to market

This book to me is all about the journey and not the destination, as it’s the style that’s most compelling where a convenience store becomes the womb for a small group who congregate daily, and bond together (like a family). It’s interesting how they deal with modern topics and how they come together to deal with them, and for readers in search of simply a well told story (no aliens, no vampires, no super heroes,etc.) I recommend it whole heartedly.