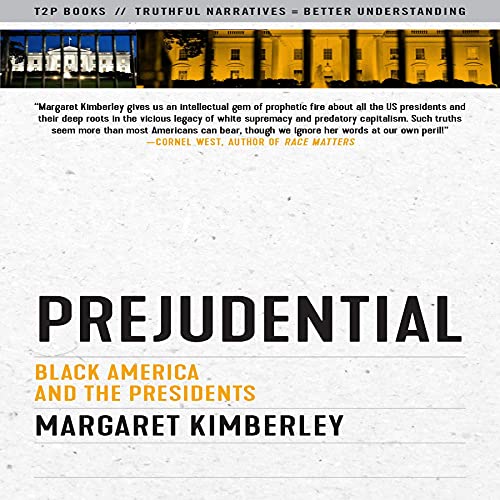 "This book is an effort to shed light on the truth.... To the extent that our leaders embody aspects of who we are as a people, studying how each president has participated in our nation’s complicated and often shameful treatment of black people is as good a place as any to start." (Margaret Kimberley from the preface)

"Margaret Kimberley gives us an intellectual gem of prophetic fire about all the U.S. presidents and their deep roots in the vicious legacy of white supremacy and predatory capitalism. Such truths seem more than most Americans can bear, though we ignore her words at our own peril!" (Cornel West, author of Race Matters)

Prejudential is a concise, authoritative exploration of America’s relationship with race and black Americans through the lens of the presidents who have been elected to represent all of its people.

Throughout the history of the United States, numerous presidents have left their legacies as slaveholders, bigots, and inciters of racial violence, but were the ones generally regarded as more sympathetic to the plight and interests of black Americans - such as Lincoln, FDR, and Clinton - really much better? And what of all the presidents whose relationship with black America is not even considered in the pages of most history books? Over the course of 45 chapters - one for each president - Margaret Kimberley enlightens and informs listeners about the attitudes and actions of the highest elected official in the country. By casting sunlight on an aspect of American history that is largely overlooked, Prejudential aims to increase awareness in a manner that will facilitate discussion and understanding.

"Margaret Kimberley gives us an intellectual gem of prophetic fire about all the U.S. presidents and their deep roots in the vicious legacy of white supremacy and predatory capitalism. Such truths seem more than most Americans can bear, though we ignore her words at our own peril!" (Cornel West, author of Race Matters)

"[Prejudential] belongs on the shelf next to the works of Howard Zinn and Roxanne Dunbar-Ortiz. It should be required reading in every school." (CounterPunch)

What listeners say about Prejudential

Tell this is not so!

American history on all levels has include these truths. We have to continue to fight for a seat at the table of American citizenship.

A New Lens on US History

The author offers a critique of each president ifrom within their own context. Many new insights.

this book shines its light on the dark unspoken truths of American history. true change can not happen unless the truths be known

Excellent resource for all!

I thoroughly enjoyed this book! American history was never a favorite subject of mine growing up in white suburbia. Flash forward to current day, I’m 54 years old, and this book opened my eyes to the undisclosed racism that influenced U.S. political processes, Thanks! I highly recommend this for junior high and high school students, BRAVO , Ms. Kimberley!

This was an awesomely informative book revealing a narrative that is not prevalently known and accepted.

It is very eye opening history about the underlying truth of the United States Presidents an their roles in keeping racism alive and well. It shows why we are having a large Black Lives Matters movement now. The foundation of this country is rotten to the core. And if all Americans are not informed of the truth our racial issues cannot be resolved. " We must be Honest with each other about our past, so we can move forward together as One Nation. Thank you Ms. Margaret Kimberley for spot lightning our "whitewashed history of our leaders and their actions to keep us divided. THANK YOU!!

Gives a few select dates with decisions for each president. Does not explore anything else. very trivial to a knowledgeable history buff...or really anyone. Wikipedia would give more info. extremely disappointing as I expected a lot more than randomly thrown out facts which carry over into the next chapter so also repeated limited info. gives no consideration of time in which many of these men lived or overall national psyche. i really cannot recommend. i rated the author's reading high though as she is clearly emotionally invested. still, expected a lot more info. most people would. so much more could have been added to make this a rich and meaningful book. a shame. save your money.