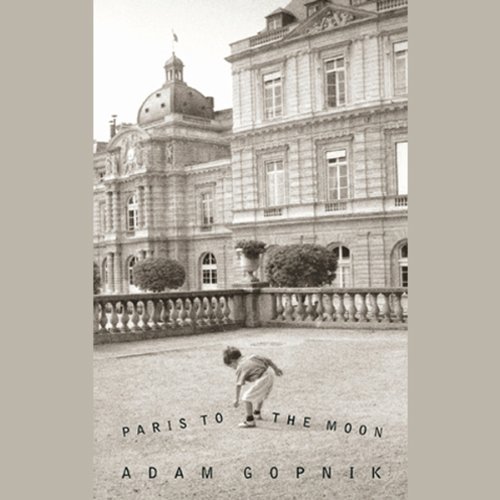 Paris to the Moon

Paris. The name alone conjures images of chestnut-lined boulevards, sidewalk cafés, breathtaking façades around every corner - in short, an exquisite romanticism that has captured the American imagination for as long as there have been Americans.

In 1995, Adam Gopnik, his wife, and their infant son left the familiar comforts and hassles of New York City for the urbane glamour of the City of Light. For Gopnik, this was above all a personal pilgrimage to the place that had for so long been the undisputed capital of everything cultural and beautiful. So, in the grand tradition of the American abroad, Gopnik walked the paths of the Tuileries, enjoyed philosophical discussions at his local bistro, wrote as violet twilight fell on the arrondissements.

At the same time, there was also the matter of raising a child and carrying on with day-to-day, not-so-fabled life. As Gopnik describes, the dual processes of navigating a foreign city and becoming a parent are not completely dissimilar journeys: both hold new routines, new languages, a new set of rules by which everyday life is lived.

Experience this weaving of the magical with the mundane in a wholly delightful, often hilarious look at what it was to be an American family man in Paris at the end of the 20th century.

"Magisterial." (Entertainment Weekly
"Gopnik is an artful reporter, dapper in his prose, sharp in his sense of absurdity." (The Seattle Times)

What listeners say about Paris to the Moon

It's an amazing collection of essays, and so much fun to hear them read by the author, but the fact that it is abridged is a true buzzkill. I have the book, so I was able to read the whole thing, but would have been much happier to have been able to "read" it in complete form from audible.

This is a perfectly and wonderfully written story of being an American expat in Paris. But any of us who have lived abroad will recognize the experience and people. And ourselves.
Absolutely loved this book; all the more for Adam reading it.

Enjoyable overall. Didn't get the story about baseball, but this was a good and dun refresher before a trip to Paris.

A romantic look at a American in Paris

More Parisian culture then Paris tour book. I got the book to get ready for a weekend trip to Paris and was looking for more history and sites to see - like Bill Bryson. But it was a nice romantic look at the authors insights in two Parisian and American culture