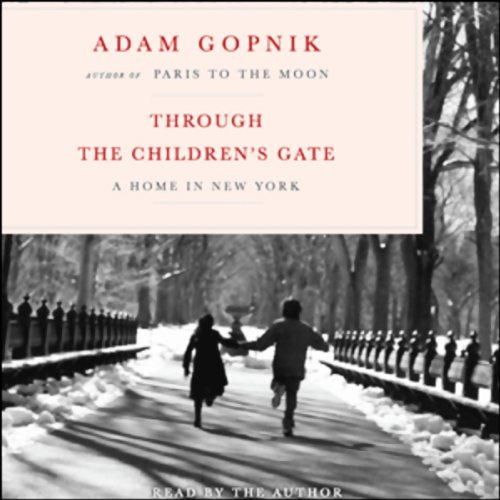 Through the Children's Gate

Through the Children's Gate

Autumn 2000: After five years in Paris, Adam Gopnik moves his family back to a New York that seems, at first, safer and shinier than ever. Here in the wondrously strange "neighborhood" of Manhattan we observe the triumphs and travails of father, mother, son, and daughter; and of the teachers, coaches, therapists, adversaries, and friends who round out the extended urban family. From Bluie, a goldfish fated to meet a Hitchcockian end, to Charlie Ravioli, an imaginary playmate who, being a New Yorker, is too busy to play, the Gopniks' new home is under the spell of the sort of characters only the city's unique civilization of childhood could produce.

Not long after their return, the fabric of living will be rent by the events of 9/11, but like a magic garment will reweave itself, reviving normalcy in a world where Jewish jokes mingle with debates about the problem of consciousness, the price of real estate, and the meaning of modern art. Along the way, the impermanence and transcendence of life will be embodied in the person of a beloved teacher and coach who, even facing death, radiates a distinctively local light.

Written with Gopnik's signature mix of mind and heart, elegant and exultantly alert to the minute miracles that bring a place to life, Through the Children's Gate is a chronicle, by turns tender and hilarious, of a family taking root in the unlikeliest patch of earth.

"Gopnik conveys in his mannered, occasionally gilded prose that New York still represents a kind of childlike hope 'for something big to happen'." (Publishers Weekly)

I'm a big Adam Gopnik fan, but I couldn't really believe this was his work. His essays are often two or three times longer than they ought to be, playing out over the course of months upon months of events, only painfully slowly folding back to return to focus in on a point. That's fine-- even luxurious-- when it works, but in most of the pieces in this book, it doesn't.

Worse, Gopnik, who reads the book himself, has pronunciation issues with words and phrases like "Elizabethan" and "sine qua non." Stunning for such an educated guy, and it'll stop you dead in mid-listen.

Perhaps the utter strangeness of Paris is what made Gopnik's writing there so engaging. With that gone, he focuses instead on his children, who for all of their quirks, are nothing but familiar and never very interesting. I want my Gopnik struggling and unmoored, not manifestly wealthy and bourgeois.

I read everything Gopnik writes in the New Yorker and am a grateful fan. So this collection appears to be stuff I've already read. No matter. He can be reread over and over and each time you notice something you missed before. His reading style, especially in the intro, is a little robotic, I'll admit; he sounds a little like the Rabbi in those Seinfeld episodes. But I got used to it quickly, and am now quite fond of it. He is one of the sweetist, funniest, and most insightful and surprising essayists writing today about the REAL stuff: Daily life. And also literature, architecture, style, manners, culture. He has such a light touch and is so generous and warm with all his erudition. He's definitely someone you'd like to know. And how many writers can you say that about?

Not as good as

I enjoyed "Paris to the Moon" both in hardback and audiobook formats, finding Gopnik's own reading to be quite a pleasurable listening experience. I was therefore really disappointed by his reading of "Through the Children's Gate" although I was able to finish it despite being tempted to just give it up. I can't put my finger precisely on what was wrong with the reading but Gopnik seemed rushed and less engaged, and it really detracted from my enjoyment of the book. Plus, I have to admit, his style gets a bit precious after a while.

We enjoyed every word and it was so nice to have Gopnik narrate his own book. His sense of humor was precious especially when talking a outs his kids. I want an update on them now that they are grown and leaving the nest as they all do.