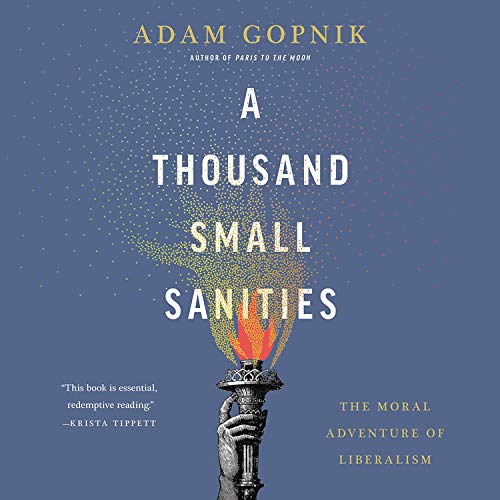 Not since the early 20th century has liberalism, and liberals, been under such relentless attack, from both right and left. The crisis of democracy in our era has produced a crisis of faith in liberal institutions and, even worse, in liberal thought.

A Thousand Small Sanities is a manifesto rooted in the lives of people who invented and extended the liberal tradition. Taking us from Montaigne to Mill, and from Middlemarch to the civil rights movement, Adam Gopnik argues that liberalism is not a form of centrism, nor simply another word for free markets, nor merely a term denoting a set of rights. It is something far more ambitious: the search for radical change by humane measures. Gopnik shows us why liberalism is one of the great moral adventures in human history - and why, in an age of autocracy, our lives may depend on its continuation.

"Written with Adam Gopnik's signature wit and charm, A Thousand Small Sanities is also a clarion call at a moment of great danger. This fierce, capacious, and startlingly intelligent defense of a whole political, social, and moral order is essential reading for our time." (Stephen Greenblatt, author of The Swerve: How the World Became Modern)

"Adam Gopnik is one of the greatest thinkers and wordsmiths of our age, and this book may be his most masterful, meaningful, and enjoyable yet. He turns his sweeping intellectual imagination into a conversation with a cross-partisan American longing for a renewal of common life that scarcely knows how to name itself. In an age in which we've connected ourselves with scale but without quality, and fractured communal cohesion in part by forgetting our shared liberal inheritance, this book is essential, redemptive reading." (Krista Tippett, host, On Being)

What listeners say about A Thousand Small Sanities

I'm tempted to go on at length about why this book is as good as it is, but I'm opting for letting Gopnik make his own case. It's difficult to present a summary that doesn't do violence to the subtlety of his analysis, nor the skill of his story telling, but I can say that the book is grounded in a broad sweep of subtle understanding of history, politics, sociology and literature. It is, in the very best sense, a liberal sampling of what makes our lives meaningful and how the liberal "agenda," such as there is one, has made all of that possible. Gopnik is a lively writer, and a compelling reader to boot, which makes listening to the book less of a chore than one might think, given the topic. Perhaps most importantly, though, he takes the critiques of liberalism (both from the left and the right) seriously enough to address them on their own terms. He takes them seriously enough to dive deeply into what makes them strong. He takes them seriously enough to explain why he disagrees with them without castigating or belittling their proponents. It really is a fantastic book. it's exactly the kind of thing that gives reasonable people hope that reason has not abandoned us. I recommend it highly and without reservation.

A festival of dopamine

When I come to understand something, I receive a little shot of bliss I take to be the result of dopamine, the neurotransmitter that makes learning enjoyable. In telling the stories of vivid historical characters who exemplify the values of liberal democracy, Gopnik makes the dopamine flow. In explaining liberalism and contrasting it with its alternatives, Gopnik makes obvious what had been hidden behind assumptions. Highly recommended.

A little Obvious but not too Bad.

This author reads like hes speaking to a child. The amount of condescension coming from his words is shocking. it was shocking the amount of obvious nonsense the author spewed within the first part of the book. Way too much labeling of left and right. When listening to the rest, it got a little better. Liberalism is not a bad approach to solving important issues in society. The author does not appreciate how Capitalism actually works. Overall, I wasn't able to get through the rest of it too easily unfortunately. Might be a nice book for a hardcore Liberal. A semi regrettable purchase for an audiobook. Not too bad though.

Gopnik is a great writer and thinker. He defends liberal democratic institutions and vale’s with aplomb. Reading it is like what a coffee house conversation should be.

His arguments are balanced and sharpe, honestly acknowledging the criticism from different views.

Worth listening too and reading

This just might be one of the best academic, intellectual, nonfiction books I have read. Or listened to; which was a huge plus as Adam read it.
So smart and understandable and important.
Will recommend to everyone I know and especially those with conservative relatives and friends. He treats them with such respect.
Thank you, Susan Ulevitch

I really loved everything about this book. So smart and fully realized. Get it now.

Very interesting read for anyone looking to learn more about the values behind contemporary politics. It’s a defense of liberalism and liberal democracy with the inclusion of common critiques from the right and the left.

Adam Gopnik’s voice of reason is particularly welcome in taxing, turbulent times. This maybe the book of the year!

A lovely short book that should have been shorter

The main exposition of the first chapter was thrilling, filled with Gopnik's erudition and felicitous writing, but was occasionally thinky argued. The two strawman chapters - on why the right, then the left, hate liberalism - didn't deserve treatments equal in length to the main exposition. For all the liveliness of Gopnik's writing, they dragged a bit, although they built bridges and arrived in good places. The finale more or less summarized an already amply summarized thesis and exposition and ended on both sides of the contemporary dispute but leaning toward hopeful. I wish I were happier at the end than I was on page 82, at the close of the first chapter.

Adam Gopnik is, by the way, a fine narrator who amplified the text by inserting a few words here and there that made his story more conversational and, at times, his intention a bit more clear. I liked that.

Interesting and understandable presentation of liberalism and conservatism. Adam Gopnick’s use of a conversation with his daughter was clever. I enjoyed this book!!