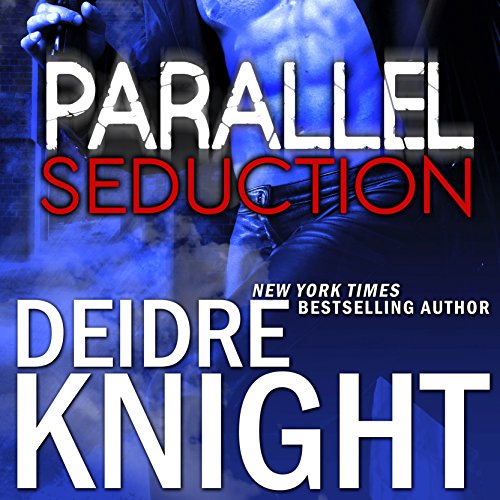 New York Times best-selling author Deidre Knight returns with yet another thrilling and out-of-this-world installment of her Parallel series.

"You can always count on Knight to take an intriguing plot and bend it like a pretzel. This fascinating series is extremely intricate with its competing timelines and complex character growth. There's never a dull moment in this terrific series!" (RT BOOKreviews, 4-star Review)

Lieutenant Scott Dillon isn't an overly complicated man - he has a rebel military operation to command and alien enemies to battle. But he also must cohabitate with humans in the middle of his unit's temporary home in remote Wyoming- humans who suddenly interest him on a much more personal level than ever before. Well, one human has enticed him, to be more precise: a female FBI linguist who not only speaks his native language, but managed to save his life in one of the worst fire fights he ever experienced - despite also being blind. That she's beautiful and alluringly sensual only arouses his interest even more.

Now, Hope Harper is trapped in the middle of Scott's own rebel camp, and he's not sure if he should broker her return to the FBI, or keep her safe behind the walls of their compound. The only problem is that a man has arrived from the future, a trespasser with a maddening desire for Hope. A man who seems to have an agenda of his own... one that includes making Hope his own lover, even though he's enemy to both human and Refarian alike.

As their mutual enemies close in and Hope wrestles with her burning attraction to both men, Scott must decide whether saving Hope will mean sacrificing whatever future he might have with her.

What listeners say about Parallel Seduction

Another Fabulous installment by the great Deidre!

Parallel Seduction is the third installment in Deidre Knight's Awesome Parallel series. This series is filled with heart-pounding action, plot twists, passion and great steamy romance. I was totally hooked from the first book in this series and have already downloaded the 4th installment "Parallel Desire" and can't wait to get listening... You really need to listen to this series in order as most of the characters progress and are included in every book as the entire story grows... :)

Warrior Jake Tierny travels back in time to stop traitor Marco McKinley and protect Kelsey and Jared, his beloved queen and king. But when Jake arrives, he discovers that Marco somehow had a change of heart and is no longer a threat. Now Jake is trapped in a time with people, who under no circumstances, can ever find out his true identity. As he makes his escape, he sees her. One look into FBI linguist Hope Harper's eyes and he finds it difficult to return to his time in the future. He then makes a decision that could change their future forever.

Now the chase is on to find Jake. The king calls on his most trusted lieutenant and best friend Scott Dillon, a man who's clearly at war with himself. First of all, Scott is a human hybrid who has a hard time being around humans, and he refuses to succumb to his Antousian nature. Now he must track a fellow Antousian. As he begins his quest, Scott discovers that Jake is not running alone. Scott is further shocked when he learns that Hope is with Jake. Wait until he finds out why.