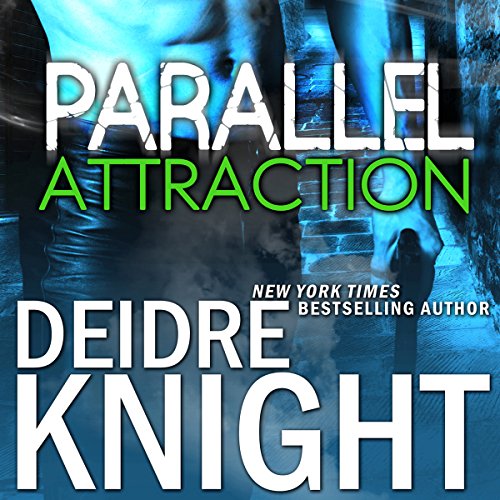 Finding a mate is the farthest thing from alien warrior Jared Bennett's mind. After years of exile on Earth, the king is close to developing a weapon that will alter the fabric of time and hopefully bring peace to his own people. But a chance encounter with scientist Kelsey Wells ignites a scorching desire far more consuming than talks of rebellion. To Kelsey, Jared's heritage is exotic and alarming - nothing like the logical, scientific facts of her own world. But despite her fears, she can't deny the heated response of her body every time the magnetic leader comes near.

As the bond between them grows, Jared struggles with a shocking family secret that keeps him from claiming Kelsey as his own. And a visitor from the future escalates Jared's battle for his people's freedom to a fever pitch, forcing the lovers to face one inescapable fact: Time can save them, as much as it can destroy them….

What listeners say about Parallel Attraction

Definitely. Very well written and the narrator, Joel Richards did a marvellous performance of all the characters.

What was one of the most memorable moments of Parallel Attraction?

There were many wonderful moments. When she was abducted and Jared Bennett went all out to save her and when he almost died she was willing to die with him. That moment was so.... touching indeed. So much love!!

He narrated brilliantly. Kept me glued to my iPad until the end.

Their love for each other was so beautiful.

I'll definitely be collecting this series.

It’s a story about two people finding their “life mates.” The story was too mild for my taste. It worked ok in all the important ways, but it was simply ho-hum. I didn’t find it quite boring just inadequately engaging. Still, I liked that the romance unfolded in a realistic, not-too-fast & not-too-slow way. And Jared, the H, a shapeshifting king of an alien planet, and Kelsey, the h, a geologist and earthling, were likeable characters. I liked that Kelsey was described as a tall and not slight woman, about 6’, though she was still described has having delicate hands and feet. Jared was 6’4”, so it worked. The sex was nowhere near explicit and sort of overly dramatized romantic. But the story worked overall. It was more about expressing love and connection, which is not a bad thing. I think there were about 2 sex scenes in the book. So sex was nowhere near the focus of the book, though the romance still was. I also liked the secondary characters and believe I would enjoy their stories in future book, though I won’t be rushing to purchase any. Though the story was about aliens and alien warfare, the focus was not on alien technology. Still some, like time travel, is used. There’s no attempt to explain how it works nor is there a focus on it, but it’s there. There’s a bit more focus on the abilities of the aliens, and there are “alien” names, though all they take a back seat to the romance and war action that is generalized. There’s not a lot that makes these actions any different than it would be in a non-alien story. This is not necessarily a bad thing to me but might be for some expecting something else. Ho-hum.

Wow, this new would is out-standing and so intriguing... I couldn't stop listening and with Joel Richards narration - well he just opened the entire book right up... Kesley is a alpha type character but she would have to be to match up with alien king Jared. Their first meeting is so sweet when they are younger but one of Jared's people steals it away from them. So when time and space brings them back together this time older they now have a better chance but it would seem that love had it's way and they were not to be kept apart after all...

Deidre Knight takes you along on a drama filled adventure where love heats up between the two that where they are from is not a barrier. She accepts him for who he is and he loves her even more for that. That is the great thing about love is sees to the core of things. Interesting happenings go on danger and intrigue filled that has you on the edge sometimes gripping the novel. Rivalry also a factor in here because she is not the only one who loves him and she finds she is also loved by another. Not a hum drum read for sure and that is the joy of this one. You keep going along in this though regardless of what is happening only wanting one thing for sure ~~ that love is the winning factor here and that they will beat all odds and be together for their lifetime.. This is a excellent beginning to a wonderful series and after this book you just have to know what happens next... I'm rushing of to download the next book "Parallel Heat"... :)

I found it too annoying to listen to Thea and Scott, I found their disagreeable personalities and constant second guessing of their “King” annoying and unrealistic behavior in a military/ monarchy setting. The first chapter was good but it just lost my attention after that. Not even half way through the book and I don’t think I can finish it.

The narrator did a good job but I had a hard time getting into this book and at times it was confusing with the time movements.
I lived this author's other series so I will give this series another try.

This book shocked me to no end. The storyline was so interesting, the characters were fascinating, and it was overall outstanding. I laughed and cried and fell in total love.

I really enjoyed this a lot!!! And am excited to listen to Book 2. Intrigue, romance, and a unique story line.I was hooked from the beginning and didn't want to put it down...or turn it off...haha! Highly recommended!

this is sooooo wierd. i gave up after 3 hours. dont waste ur credit. i cannot go into detail about how obscure this book is.......its just too horrid and a poor attempt at sci-fi

+4 stars for the intelligence in this sci-fi story. It is very easy to read or listen to. No crude language, but I would not recommend it for kids 15-years or below, it’s more appropriate for college age and up. If bed scenes were curtailed, the book would have been really great for young adults and teens interested in a good science fiction with fantasy.
Minus 1/2 star for extended sensual scenes that are a little bit too long (kinda feel like fillers) for my taste and are superfluous for true enjoyment of the book (unless one is mainly after sensual narratives, I guess). I am a little bit hesitant to continue the series if there’s the same amount of over narrated sexual scenes.