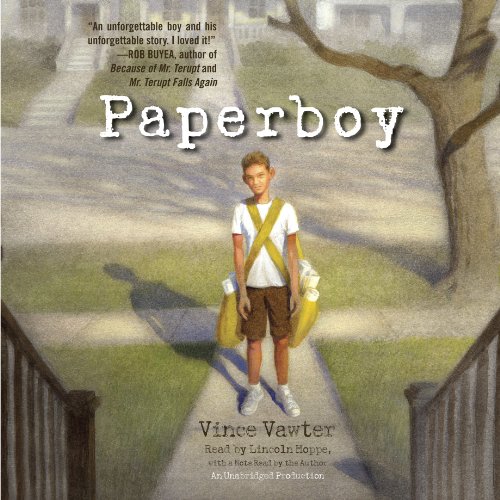 For fans of To Kill a Mockingbird, The King's Speech, and The Help. A boy who stutters comes of age in the segregated South, during the summer that changes his life.

An 11-year-old boy living in Memphis in 1959 throws the meanest fastball in town, but talking is a whole different ball game. He can barely say a word without stuttering, not even his own name. So when he takes over his best friend's paper route for the month of July, he knows he'll be forced to communicate with the different customers, including a housewife who drinks too much and a retired merchant marine who seems to know just about everything.

The paper route poses challenges, but it's a run-in with the neighborhood junkman, a bully and thief, that stirs up real trouble - and puts the boy's life, as well as that of his family's devoted housekeeper, in danger.

"[A] compelling first-person narrative." ( The Washington Post)
"Lincoln Hoppe's narration is pure perfection.... [he] brings out Little Man's endearing vulnerability and portrays the stutter with a tender ease and grace that will make listeners feel empathy and hope for the boy.... The afterword is read by author, and stutterer, Vince Vawter, making this an extraordinary listening and learning experience." ( AudioFile)
"In a compelling climax, he, still stuttering, proudly announces his real name; the moment is as eloquent as his story." ( The Horn Book)

What listeners say about Paperboy

Paper boy is my favorite book I am a 9 year old boy a d my name is Owen White and I read this book with my Mom I do not think there were any parts I disliked in the book. I think it's a good book from 9 to 10 and up it made me cry it made me laugh it made me happy but I highly recommend it 9 and up for adults to. This book also has positive remodels and positive messages it should take you a month to read. 😀😬😍😅😡🤔😭 those are all of the emotions that you feel read paper boy!

i loved it. was a sweet thought provoking story. im glad I listened to it.

Is there even a real plot to this story? I don't think so. Basically all I got from it is this kid has a speech impediment and these are his day to day struggles. What's worse is it is narrated in first person so you have to listen to a narrator that sounds like he has a speech impediment. This book should have NEVER been formatted into an audio book. If you really something your child might like buy a paperback and make them read it the old fashioned way. But be warned there isn't much of a plot and probably won't hold their attention. I am 36 (and enjoy young adult fiction for a quick read) and this couldn't even hold my attention.

An authentic and beautiful story about learning to understand and the importance of facing hard individual circumstances with fortitude and support.

Intelligent and innocent, a perfect story

Through the eyes of a young traveler in life, the journey told in "Paperboy" is so honest, insightful, and triumphant that it is now my "go to" story for motivation and inspiration.

This was a great book. I dont give out 5 stars very often, but I loved this book.

My boys and I enjoyed listening to the story.
Great lessons around the difficulties of life for a young stuttering boy in the late 50s

As a speech-language pathologist working with people who stutter, I was enthralled and impressed with this story in the life of an 11-year-old male during a significant summer in the tumultuous times of Memphis in 1959. This memoir is relevant reading for any person interested in the unique complexities of communication.

Awesome story and good narration! This was a really easy story to listen to, and we so enjoyed it that we will ptobably listen to it multiple times.

Not for my Elementary students

The absence of the word bitch.

Has Paperboy turned you off from other books in this genre?

I was listening to this book as a possible buy for my school library. It may be a good book but it isn't write for my school's population.

Loved Vince's story and would love to know what happened to Mam, Mrs Worthington and mr Spiro - well done on putting this out there for all to read xx