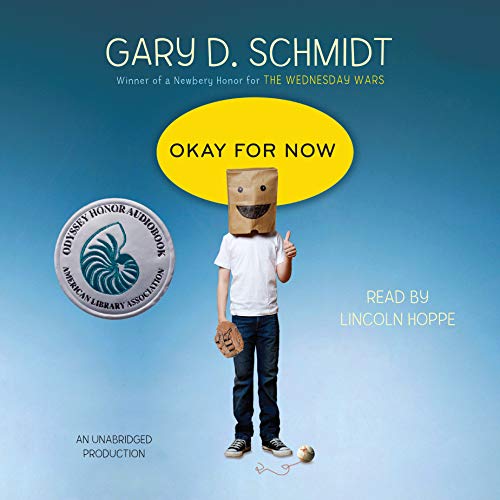 By: Gary D. Schmidt
Narrated by: Lincoln Hoppe
Try for $0.00

As a 14-year-old who just moved to a new town, with no friends and a louse for an older brother, Doug Swieteck has all the stats stacked against him. So begins a coming-of-age masterwork full of equal parts comedy and tragedy from Newbery Honor winner Gary D. Schmidt.

As Doug struggles to be more than the skinny thug that his teachers and the police think him to be, he finds an unlikely ally in Lil Spicer, a fiery young lady who smelled like daisies would smell if they were growing in a big field under a clearing sky after a rain. In Lil, Doug finds the strength to endure an abusive father, the suspicions of a whole town, and the return of his oldest brother, forever scarred, from Vietnam. Together, they find a safe haven in the local library, inspiration in learning about the plates of John James Audubons birds, and a hilarious adventure on a Broadway stage.

In this stunning novel, Schmidt expertly weaves multiple themes of loss and recovery in a story teeming with distinctive, unusual characters and invaluable lessons about love, creativity, and survival.

What listeners say about Okay for Now

Life is good even when its not...

Loved Schmidt's book Wednesday's Wars and was not disappointed in this book which continues the life of the main character's best friend.

Book is intended for teens - but crosses the adult divide and makes for a nice lite listen. Lincoln is a great reader and perfect match for the central character.

Almost 5 stars, but not quite

I really wanted to give this book a 5 star review. I really loved the way the author returned again and again to His bird metaphor. I also feel he did an excellent job capturing the voice and thoughts of his adolescent protagonist, and the other characters in the story were rich and well-developed.

That said, there were a couple of unbelievable elements that really frustrated me. First, one important plot element is that one of the characters can’t read. However is the course of a few months that character goes from illiteracy to reading Jane Eyre. As a middle school English teacher, I found that extremely frustrating. I work with students who struggle with illiteracy all the time, and it is NEVER that easy. I feel this book is insulting to educators in the way it oversimplifies a huge issue in education.

My second frustration is less of an issue, but it has to do with a Broadway play that comes up in the story. Somehow a couple characters end up cast in the production against their wills without ever even trying out. That is simply absurd.

Still, overall this was a very well-written book. I think it approaches some important and difficult issues (especially Vietnam) in an intelligent way. I just wish the author would have done a little more research into illiteracy before making t an issue in his book.

The narrator was very good.

This is a great book!

There is not one thing about this book that I didn’t absolutely love! The way the author tells his story is ingenious. The reader was perfect in every way. I highly recommend this book for readers of all ages!

One of the Best Books Ever

I am a mom who loved listening to this book with my 17 year old son. It’s our second Gary D. Schmidt book second to “The Wednesday Wars.” It’s a fantastic touching story, and the narrator is very engaging. My son kept asking me if we could play it, and I personally plan to listen to it again and again because I enjoy the way the author writes. I couldn’t help picture the main character older than he is in the book. I’m thinking 15 or 16 rather than an 8th grader. FYI, There are some spoilers to Jane Eyre which I’ve already read, so it didn’t affect me. However, I wouldn’t have liked that had I not read it since it’s one of my all-time favorite classics. Overall “Okay for Now” is one of the best books I’ve ever read! Highly recommend!

I loved it this time and it was great! You should put this book 📖 on sale, if you do, more people will want to buy it!

This is an excellent story. I was hooked from the beginning. There are so many difficulties Schmidt taps into that many experience. I felt as if I was walking along with the characters and experiencing their life with them. I found us elf rooting for them, cheering them on and encouraging them to not give up just yet and a few moments where I just wanted to hug the main character as if he was my own son. Truly well written and well told.

Great story, great performance. Looking forward to reading more books from Gary D. Schmidt. A peek at life in a small town, the power of a library and librarian, and teachers that foster a growth mindset.

Best Christmas gift to myself.

Don’t miss reading/listening to this book. If you do you will miss out on one of the best human interest stories ever!!

Gary D. Schmidt has a brilliant way of writing that is compelling for teenage readers (my junior high-age son loved this book) and even more so for adults who understand the depth and layers woven throughout the story that youth readers may miss. His way of telling this story is simply outstanding.

Excellent! A must listen!

This is a beautifully weaved story. I love the characters and the journey the main character takes in his life.