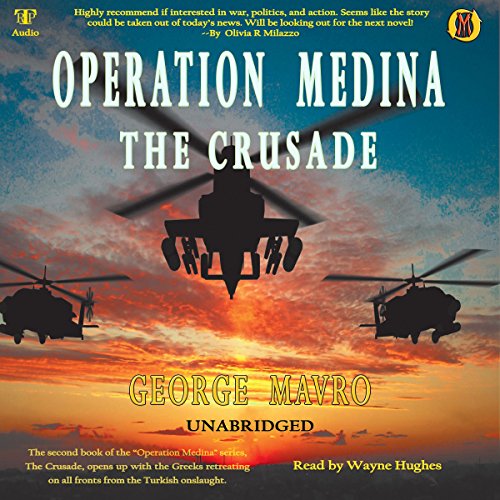 The second book of the series Operation Medina, Crusade opens up with the Greeks retreating on all fronts from the Turkish onslaught. The US has dispatched an expeditionary force consisting of a fighter squadron and a small USAF security force to assist the Greeks. As the Americans join the fight against the Turks, they begin to exact a heavy toll on the enemy. The Greeks manage to stabilize their Albanian and Macedonian fronts yet are unable to halt the Turks, who continue to push them back.

As the tide of battle begins to turn against General Kemal, he plans a final act of madness. A daring plan is formulated involving a simultaneous attack from both air and land to stop the madman from carrying out his deadly scheme. If the plan fails, the Americans will use the only other alternative left to stop him: a B-2 bomber with a nuclear payload, which could lead to a nuclear showdown with other Islamic states. With the odds stacked highly against them, the allies must find a way to stop Kemal and avert a nuclear holocaust.