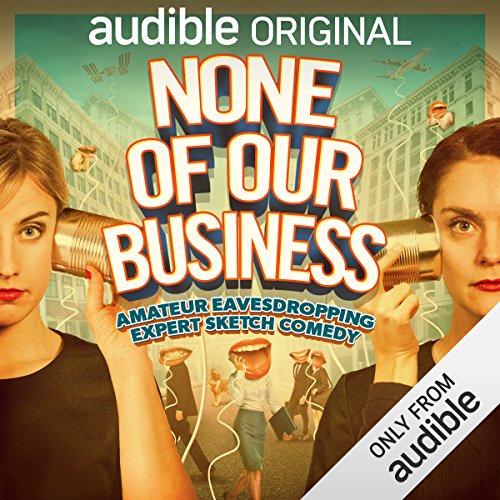 None of Our Business

[Contains explicit content] What’s the weirdest conversation you’ve ever overheard while eavesdropping? Was it hilarious? Disturbing? None of Our Business is a new audio series about the intrigue of eavesdropping. The show is hosted by comedians Gwynne Phillips and Briana Templeton, who often perform together as an award winning sketch comedy duo called The Templeton Philharmonic (voted “Best Duo” at the LA Comedy Festival, and “Producer’s Pick” at the Toronto Sketch Comedy Festival).

What listeners say about None of Our Business

This is a fun show. Briana and Gwynne are really great at acting out the ridiculous stories the guests have overheard. I'm not normally an improv fan but this is really fun, and it was interesting to hear the interviews beforehand with so many guests that I like. Astronaut Chris Hadfield's episode was great!

It’s just Not funny. Some stories sound made up. the reenactments are silly at best. Just not funny

didn't find it at all funny. now I can't get rid of it FM my library

Sadly I found zero humor in any of this. So bad I couldn’t even finish

Not funny. And if I'm listening to an improv show featuring comedians, I kind of want to hear those comedians in the sketch?? You have Colin Machrie on your show. Why do you not include him in the sketch???? Disappointed.

Considered Review After Reflecting for Some Time

Thought it would be fun to hear sketches acted out. unfortunately while concept is entertaining,the actual stories and execution, I found to be quite boring. I listened to two interviews that sounded really forced. luckily, I got it for free so I'm not too peeved otherwise quite devastated if I spent money on this one.

maybe it's an acquired taste

couldn't like it, too "floofy and ditzy" felt forced wasted guest's time
with forced wackiness.

Absolute genius. So so funny. They are clever women and build such hilarious stories from their guests’ experiences. Highly recommend.

Not my cup of tea, but some will like it

Not my cup of tea, but some will like it. Just seemed weird to me. Very slow.