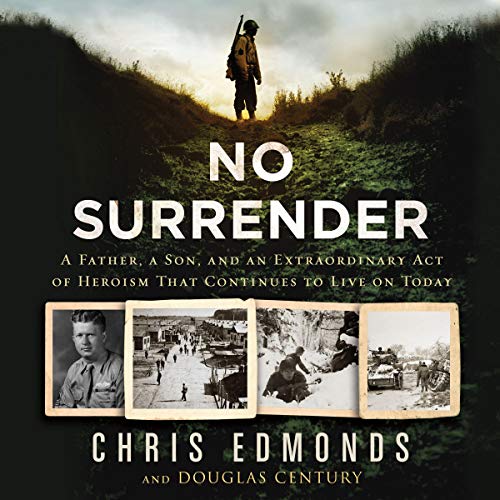 By: Christopher Edmonds,Douglas Century
Narrated by: James Lurie
Try for $0.00

Part contemporary detective story, part World War II historical narrative, No Surrender is the inspiring true story of Roddie Edmonds, a Knoxville-born enlistee who risked his life during the final days of World War II to save others from murderous Nazis, and the lasting effects his actions had on thousands of lives - then and now.

Captured in the Battle of the Bulge, Master Sergeant Roddie Edmonds was the highest-ranking American soldier at Stalag IXA, a prisoner-of-war camp near Ziegenhain, Germany. A native of Knoxville, Tennessee, Roddie was a simple, soft-spoken man of deep inner strength and unwavering Christian faith. Though he was driven to the limits of endurance, Roddie refused to succumb to Nazi brutality toward the Jewish American GIs with whom he was serving. Through his inspiring leadership and bravery, Roddie saved the lives of hundreds of US infantrymen in those perilous final days of the Second World War. His fearless actions continue to reverberate today.

Growing up, Pastor Chris Edmonds knew little of his father’s actions in the war. To learn the truth, he followed a trail of clues, a journey that spanned seven decades and linked a sprawling cast of heroes, both known and unknown, from every corner of the country. In No Surrender, Pastor Chris, joined by New York Times best-selling coauthor Douglas Century, chronicles his odyssey to tell the unforgettable story of his father and his remarkable valor. He also provides startling details (and vantage points) of some of the major events of World War II and US Army initiatives that helped the Allies win the war, including the Battle of the Bulge, the massacre at Malmedy, and the now-little-known Army Specialized Training Program, which prepared brilliant young “soldier-scholars” - or “Quiz Kids” - from across the nation to battle the Nazis.

As compelling as the number one New York Times best sellers, Unbroken, Boys on the Boat, Band of Brothers, and Schindler’s List, No Surrender is an epic story of bravery, compassion, and faith and an inspiring testament to man’s goodness. It is also a clarion call for our narcissistic age - a shining example of the transformative and redemptive power of moral courage.

What listeners say about No Surrender

Incredible story of an American Hero who deserves the Medal of Honor for his willingness to stand in the face of the enemy to save hundreds of lives. I highly recommend this book!!

Well written and well performed. A personal story with global impact that demonstrates the impact a regular person can have by doing the right thing when faced with difficult options. A life well lived can make a difference.

seems like some of our young people are struggling with finding purpose ... a life simply lived to a code aligned with the maker of your soul is a beautiful thing

A son discovers his dad is a WW2 Hero

Chris, Thank you for sharing your father’s story. I know this wasn’t easy, but a fascinating journey to learn so much about your dad. Lauren, thank you for kickstarting this. I have really enjoyed this book. ~Andrea

This incredible biography of Roddy Edmonds, written by his son, Chris Edmonds, is a true story that will stick with me for the rest of my life. Roddy Edmonds’s incredible courage and bravery, coupled with his faith in God,Is so moving. This book also Chronicles the lives of the men he served with in the POW camps.The details of the POW’s experiences at the hands of their German captors is sometimes difficult to listen to, but not over done. The reader does an excellent job of helping me to feel the excitement of the coming liberation of the camp. I had tears in my eyes just listening to this. The closing of the book highlights how important every human being’s actions make a difference in the lives of others, with an update on each of the POW’s after the war. So moving. An historical, yet personal account of our World War II veterans. I am glad I purchased this book.

most of the histories of World War II in Europe that I have read said little or nothing about the experience of American pows at the hands of the Germans. This is well done historical biography by a gentleman who is not a historian by training. It's a great story about his father and an incredible acts of Bravery that saved the lives of over a thousand men. Well worth the investment of time.

ONE OF THE BEST!

This is absolutely one of the best books I have come across regarding WW II & the Holocaust. Magnificent!

This story of a life well lived brought out a range of emotions. The most important being Gratitude. This is a great book that I highly recommend. You will walk away from it feeling thankful for true American's like Roddie.

A Real War Hero. Son who learns about his servce

I'm from a military family. It can truly be difficult to find out what the hero right in your own house is like. Soldiers often must not speak of things. Even if they can speak freely, most have learned reserve and even Harsh treatment that you have no control over from the outset, brings out true character whether heroic or monstrous. Creating daily order, something to do each do, creates a foundation, helping people have purpose. Better yet, a plan for something everyone can pitch in to help. Courage is standing up for what's right, but consulting YHWH in what to plan, standing firm for those around you is what it takes to not just survive, but also to thrive. Doing these things while keeping hope alive, teaches the importance of keeping the faith. How wondrous to find so very much blessing in the history of a parent. Narrative was truky excellent!