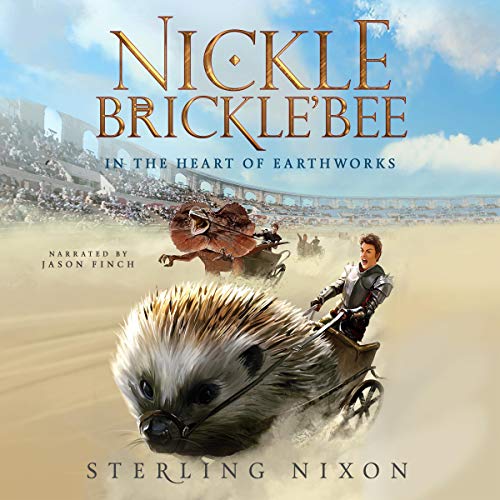 By: Sterling Nixon
Narrated by: Jason Finch
Free with a 30-day trial

Nickle Brickle’Bee is odd, even by his own standards. While most boys are starting to get hair under their arms, Nickle starts growing whiskers on his chin. By the time he is 12, he can grow a full beard.

Then, one day, Nickle finds himself swallowed by the earth and taken to the center of the world, where he finds a massive magical city called EarthWorks that is governed by a myriad of powerful creatures.

Between horrifying monsters, elves that rule with pomp and power, fairies that are in open rebellion, a greedy dwarf warlord, and an indestructible but blind adversary, Nickle finds himself in the middle of a power struggle that could mean the end of this new world.

What listeners say about Nickle Brickle'Bee

Nickle Brickle'Bee is probably the first novel in the In the Heart of EarthWorks series of fantasy books for young adults. Author Sterling Nixon delights us with a writing style reminiscent of that of Neil Gaiman and that's a very high praise in my book. Filled with endearing characters, unlikely heroes, magical creatures, vivid descriptions for locations and events, while also depicting acts of epic heroism and true friendship, this novel is fun, entertaining and funny. The audiobook version of Nickle Brickle'Bee is brought to life by narrator Jason Finch. He infuses the story with talent and switches seamlessly between characters, using all sorts of voices and accents, creating a high level of immersion. Nickle Brickle'Bee has been nominated for Whitney Award and I can't recommend it enough, for either young adults or the entire family, this could be the perfect choice.

Nickle Brickle’Bee is different from most 12-year-old boys because he’s shorter than most, he has the ability to grow facial hair, his name is odd, and he has a penchant for tasting soil. Placed in a home where honesty is valued above everything else, Nickle finds himself in a bit of a spot. Before he can decide what to do, he is whisked off to the center of the earth. There he discovers his parentage, meets elves, fairies, and finds himself in a battle against a dwarf warlord and another evil nearly immortal enemy. Nickle must navigate his way through his new life and make sense of his new discoveries. Something that seems a bit overwhelming. I thoroughly loved this audiobook. It is written for listeners of all ages. One cannot help but smile at the predicaments that Nickle and his friend Jason find themselves in. The race with the hedgehogs and other animals is priceless! Every aspect of this story was well developed including characters, dialog, and plot twists. The author, Sterling Nixon, creates a vivid world that is detailed in his unparalleled use of rich adjectives. Nixon’s writing style creates an impressive storyline. The narrator, Jason Finch, gave an outstanding performance. I enjoyed his voices which for each character were distinct and suited for their personalities. His rhythm was smooth and well-timed. He kept the excitement going and added more depth to an already nearly perfect story! There were no issues with the quality or production of this audiobook. As a result, Nickle Brickle’Bee has been awarded the AudioBookReviewer Choice Award. This prestigious award is presented to the author of the book whose book is believed to deserve higher than the standard 5 Star Rating. Disclaimer: This Audiobook was provided free of charge by the author, narrator, and/or publisher in exchange for a non-bias, honest review.

I love to listen to a good book while I run, but it’s rare that I find one where I can fully submerge myself. This book did just that! I would look forward to my runs and even add to them in order to get more of the story. Excellent writing and fun read. I hope there is more to come.

Great first in the series! Loved the friendship between the main characters. Funny, witty dialogue throughout! Narrator did an awesome job. Can’t wait for the next one!

Exciting plot that engages all ages

Sterling Nixon is one of my favorite authors. His plot lines are always fresh and engaging. This is my favorite of his books. I enjoyed the reader as well. He has a certain quality to his voice that resonates with my grandchildren. They have listened to this book many times over and they keep asking for the next story. I must say that I am looking forward to it too.

So much fun and I love the world that the author created. suitable for all ages grade school and up. But...I wasn't fond of the narrator. He does fine with character voices but on monologue voice didn't appeal to me. It didn't make me stop listening to the book but I might read hard copies for the sequel.

Fun story. Hopefully more episodes to come!The narrator over enunciated a bit. It was annoying.