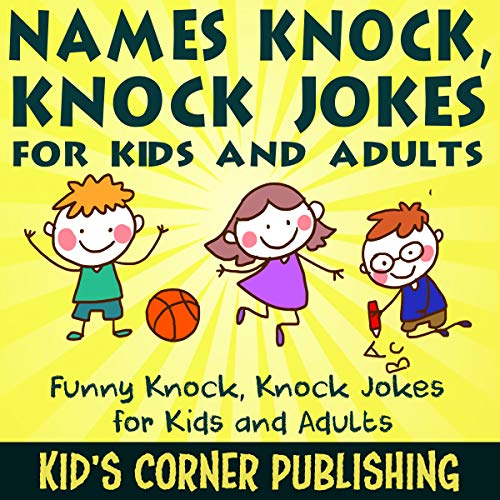 By: Kid's Corner Publishing
Narrated by: Rob Izenberg
Free with a 30-day trial

Grab this collection of funny and silly "names" knock-knock jokes that is both for kids and adults. Jokes such as:

What listeners say about Names Knock, Knock Jokes for Kids and Adults

Haha! If you think these knock knock jokes are silly, I kid you not, they are HILARIOUS! I just made a knock knock joke on my friend's name while we were out and she's laughing out loud! You want a stress free life? Get on with the Knock Knock Jokes craze already!

Some Names are silly to begin with but these knock knock jokes are amusing. There are some names I tried to find but not there but all the most common ones can easily found in this book. Nice collection of knock knock jokes. Nice addition to my library.

I bookmarked the parts that I find funny...

I bought the big bundles of jokes only so my credits are worth it. It would take my family a great deal of time to finish all these jokes. I just finished syncing these jokes to their devices. I also bookmarked the parts that I find funny. I love audible!

I was sold by the sample of knock knock jokes

I was sold by the sample. The knock knock jokes are good. Although, I would recommend it more for adults than kids. Children 12 years old and above, perhaps.

knock knock jokes for all my friends' names!!

I find it rather amusing to have knock knock jokes for all my friends' names. Luckily, their names are so common and easy to find in the book as it was arranged in order. There are intricate and not common names that you should not expect to find here. Overall, I find it a fascinating tool to make a joke out of someone's name without insulting them. Perfect idea when you just met a person for the first time.

I can't believe names could be this fun! LOL

I can't believe names could be this fun! LOL. These knock knock jokes are golden! I am having fun with my brothers' names now. This is a gem!

They're both silly yet hilarious!

I have listened to a bundle of Animal jokes and riddles and one Knock knock jokes. They're both silly yet hilarious! LOL. There is no way a kid will not laugh at these jokes. The narrators are actually funny. I just wished there's a kid narrator as well so a kid can really feel at home, you know?

Some are cheesy while some are silly.

I thought I was getting some random Knock knock jokes but this was okay too. There's really a lot of knock knock jokes here for both adults and kids. Some are cheesy while some are silly. They're kid-friendly, so I'd recommend it.

Among other Knock Knock jokes in this series or bundles, I find Names Knock Knock Jokes and the 1500+ knock knock jokes the best purchases for listeners who value their credits. These are the only two you needed. You're welcome! Happy listening all y'all!

The narrator really has a comedian vibe in him.

These are the goodies! I see jokes as pretty lame but these knock knock jokes are good. The narrator really has a comedian vibe in him. I like him!

Not just some random Knock knock jokes one liners.

Not just some random Knock knock jokes one liners. They would actually make you think! Some are flat out cheesy haha. I wish there's more time before the answer is revealed so I don't need to pause the audiobook most of the time.