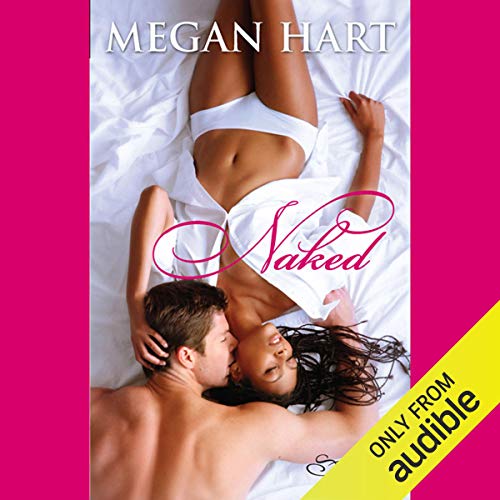 By: Megan Hart
Narrated by: Lauren Fortgang
Try for $0.00

No strings. No regrets. And no going back....

But I can't give my heart to a man who's so...unconventional. His last sexual relationship was with a married couple. It's enough that my ex-fiancee preferred men; I can't take that chance again, no matter how much my body thrives on Alex's touch. I can't risk it, but I can't resist it, either.

"Alex can be very convincing when he wants something. And he wants me."

What listeners say about Naked

I have all of the Megan Hart that are on Audible and this is another great one. It was nice to see her introduce some characters for other books. I was on the edge of my seat the last few hours thinking it was going to end a certain way but it went another.....love it! The narrator also did a great job!!

This is such a touching, sweet story about finding true love. You will not be disappointed get this one. Thus far this my favorite Megan Hart book.

I LOVE THIS BOOK

THIS WAS ONE OF THE FIRST ROMANCE BOOKS I LISTENED. MEGAN HART IS AMAZING. THE NARRATOR REALLY DIN A GOOD JOB WITH THE CHARACTORS AND THE STORY LINE WAS INTERESTING.

Let me preface this by saying, I never read the summary of this book. I'm on Megan Hart's Fan page on Facebook and when I saw that she released a new book I came straight here to get it. I started listening to the book at work and actually had to cover my mouth with my hand when I let out a rather loud squeak when Patrick said Alex Kennedy's name. For some unknown reason, Alex is my favorite of Megan Hart's characters. After reading 'Everything Changes' ('Tempted' from Alex's point of view. It's not in audiobook but it's A MUST READ, SERIOUSLY), all I wanted for him was a happy ending.

Clearly, it took him years to get over feelings for Ann. He wasn't willing to risk his heart again and went back to dating men guarantee it. He was succeeding until he met Olivia. They both let down their guards and fell into exactly what they both needed.

The portrayal of a mixed race relationship and how others react to it is spot on. In small towns, mixed race couples are not common and people still stare, or at least take a second look. Olivia was accustom to this and Alex never noticed until the blatantly rude initial reaction from his mother.

I loved how Megan Hart brought several characters from her books into 'Naked'; the Harrisburg area is not that large. Her use of 'six degrees of separation' always refreshing.

This book is deliciously hot and filled with characters that are flawed which makes them all the more endearing, like every Megan Hart book. I highly recommend it.

This one of Megan Hart's better books. As usual there were characters from past books, which is cool. Good story, addition of a male narrorator would have made it perfect. Can't wait for the next one.

Naked starts off wonderfully, but plateau's hard as the story progresses. The hardcore romance is very well written and the sex scenes are enticing. The overall story however is lacking. The first person train of thought narrative is witty and engaging. I loved Olivia's internal monologues. The other characters, including Alex, seem to be glossovers. Too stereotypical to be real and not really resolved. Too many people and plots are introduced and not really developed thoroughly almost as if they are there only to show that Olivia doesn't live in a bubble. This book is a good straightforward romance novel, but if you're looking for a riveting and engaging story, this is not it.

I Almost returned this book,but glad I did not

The unexpected story line this book started off with had me seriously considering returning it, but due to such great reviews I held steady and proceeded forward, and I am very glad I did!!! An impelling mixture of emotions throughout this listen but honestly a fantastic book and one I didn't expect to like as much as I did. Great romance with complex characters that all tie together and created such a heartfelt and sensual love story.

I love hot romances but this one drove me crazy. I couldn't tell what was up with the guy; was he straight, was he gay, does he go both ways? I could care less but not knowing drove me bonkers. I kept thinking that he was going to hurt her, and was nervous it was going to happen. This book had some steamy sex scenes it just wasn't for me though.

Very well written, very sexy, and hard to put down. A can't miss if you love Megan Hart. Narrator was excellent!!

Now I Get It

This was only my second audio book. After the 1st, I was so disappointed; I really couldn't get what all the fuss was about with this craze. The story was good, but the narration killed it for me. I figured my reading and my imagination were a lot better. I wanted to try one more though, so I went with another author I liked a lot in print. I have read several Megan Hart books, but this audio book has made me a believer in this form. Not only is this the best Megan Hart book out there for me so far, the narration actually ADDED to the experience. I have not been able to put this down, taking my iPod everywhere with me, even when I really shouldn't. I kept sensing the story was going one way, and then it would surprise me again. What an old-fashioned loved story with some unexpected nuggets. LOVED IT!